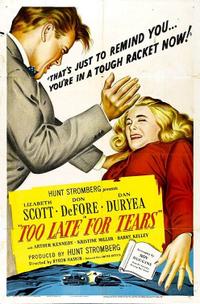 Too Late For Tears / Larceny

TOO LATE FOR TEARS, 1949, 99 min. Dir. Byron Haskin. A ruthless housewife is determined to keep an ill-gotten satchel of cash, even if it means murder. One of the great noirs of the classic era, long thought lost but now returned to the big screen! Starring Lizabeth Scott, Dan Duryea, Arthur Kennedy. LARCENY, 1948, Universal, 89 min. Dir. George Sherman. Here’s one of Dan Duryea’s most obscure titles, also notable for being the first foray into film noir for crooner John Payne (of 99 RIVER STREET and KANSAS CITY CONFIDENTIAL fame). The two slicks play hustlers trying to bilk a war widow (Joan Caulfield) out of her money. Things really heat up when pistol-packing Shelley Winters, who has a thing for both men, hits town. Wisecracking scriptwriter Bill Bowers has a field day with all the slang-spewing sass.