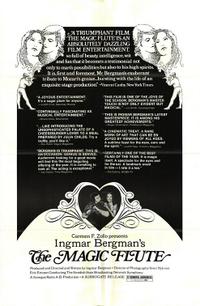 Looking for movie tickets? Enter your location to see which movie theaters are playing The Magic Flute (1975) near you.

A longtime pet project of Swedish filmmaker Ingmar Bergman, Wolfgang Amadeus Mozart's opera The Magic Flute was finally brought to the screen in 1973. While the opera itself is offered in a highly stylized and theatrical fashion, the fluidity of the camerawork turns the affair into a purely cinematic experience. Sung in Swedish, the libretto remains as ever a gentle parody of the initiation ceremonies of the Masons, offered as an other-worldly fantasy involving a kidnapped princess (Irma Urrila), a vengeful Queen of the Night (Birgit Nordin), and a carefree wanderer who periodically plays the titular flute.