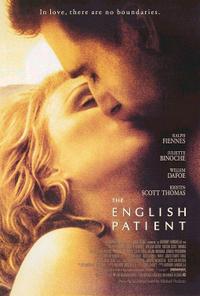 THE ENGLISH PATIENT, 1996, Park Circus/Miramax, 162 min. Dir. Anthony Minghella. Ralph Fiennes is badly burned in a WWII plane crash and wakes up in a monastery, where he claims to have no memory of who he is. As nurse Juliette Binoche tends to him, his story emerges in flashbacks, and his passionate affair with Kristin Scott Thomas forms the basis of one of the most beloved romances in movie history. QUIZ SHOW, 1994, Buena Vista Pictures, 133 min. Dir. Robert Redford. In December 1956, millions of viewers tuned in to watch reigning champ Herb Stempel lose to the refined Charles Van Doren on the quiz show “Twenty-One.” But it was all faked, and the resulting scandal is the basis for this nuanced look at integrity falling victim to TV ratings. Paul Attanasio’s script earned an Oscar nomination, as did Redford’s direction and Paul Scofield’s performance as Van Doren’s father.