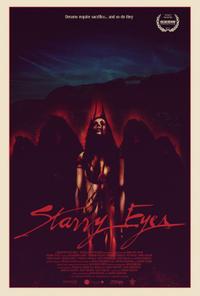 STARRY EYES, 2014, ???, 98 min. Dirs. Kevin Kolsch, Dennis Widmyer. Ambitious actress Sarah Walker (Alexandra Essoe) will do almost anything in her quest to become a movie star – but she didn’t bargain on the satanic cult that serves as Hollywood’s gatekeepers. A take on stardom even more nightmarish than MULHOLLAND DRIVE, this occult tale of paranoia and possession was cited by Time as one of the 10 best films of this year’s SXSW Film Festival. POSSESSION, 1981, Bleeding Light Film Group, 127 min. Dir: Andrzej Zulawski. In this controversial, unclassifiable cult film, secret agent Mark (Sam Neill) reunites with Anna (an amazing Isabelle Adjani) and their young son only to be asked for a divorce. But it’s not because his wife has been seeing another man - when Mark hires a private investigator to follow her, he learns she’s been spending time with a strange, tentacled creature.