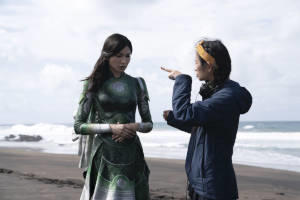 What to Watch on Vudu: Marvel’s ‘Eternals,’ ’Sing 2,’ Denzel Washington’s ‘A Journal for Jordan,’ 2022 Golden Globe Winners and More

Want to know what’s coming soon to digital and what to watch right now on Vudu? Here is your weekly guide to the latest releases:

This time, the gang have their sights set on making it big in Redshore City, the entertainment capital. To impress the head honcho of a major media company (voiced by Bobby Cannavale), they have to convince a long-retired star (Bono) to join their show. As with the first movie, Sing 2 is driven by its soundtrack, covers of beloved pop and rock tunes, while also providing plenty of laughs and heartwarming moments to be enjoyed by the whole family.

The latest directorial effort from Denzel Washington, A Journal for Jordan, is also now available to rent on Vudu in the Theater at Home section. Based on a true story, the romantic drama stars Michael B. Jordan (Black Panther) as United States Army First Sergeant Charles Monroe King, who kept a journal for his newborn son while serving in the Iraq War. He wrote about his life and his experiences in the military, and he shared advice to the child for how best to grow up in the years ahead.

After King died in combat, his fiancée, Pulitzer Prize-winning journalist Dana Canedy, turned the journal into a shared memoir, titled A Journal for Jordan: A Story of Love and Honor. Chanté Adams (Roxanne Roxanne) portrays Canedy in the movie, which also recounts the couple’s relationship and honors King as a heroic and devoted soldier and family man.

Whether you’ve seen the original or not, you’ll want to rent Sing to watch alongside Sing 2. Or you could purchase the first movie as part of an Illumination two-movie pack bundle including The Secret Life of Pets. Or, just go for as many Illumination animated features as you can. There’s a five-movie collection that includes those two plus Despicable Me, Despicable Me 2 and Minions. And a 10-movie collection adding in Despicable Me 3, The Secret Life of Pets 2, Hop, Dr. Seuss’ The Lorax and Dr. Seuss’ The Grinch.

I would also recommend some other non-Illumination movies that similarly center around worlds full of various anthropomorphic animal characters. Sing 2 pairs well with Disney’s Zootopia. There’s also the medieval society of Disney’s Robin Hood, DreamWorks’ martial-arts-focused Kung Fu Panda (and its even better first sequel) and the Western-pastiche Rango. For loads of slapstick, you can’t go wrong with The Angry Birds Movie or its goofy follow-up.

You could pair A Journal for Jordan with Denzel Washington’s other directorial efforts, the best of which is his previous film, Fences. He also helmed The Great Debaters and Antwone Fisher. Or, check out other movies starring Michael B. Jordan playing real people. In Just Mercy, he portrays civil rights defense attorney Bryan Stevenson, and in Fruitvale Station, he portrays Oscar Grant, a man killed by a transit cop in Oakland in 2009.

If you want something similar to A Journal for Jordan, other military movies based on memoirs include Born on the Fourth of July, starring Tom Cruise, American Sniper, starring Bradley Cooper, Jarhead, starring Jake Gyllenhaal, and Whiskey Tango Foxtrot, starring Tina Fey and Margot Robbie. The Nicholas Sparks adaptation Dear John is also a good fit as it’s about a long-distance romance between a woman and a soldier serving in Afghanistan.

One of the biggest movies of last year arrives on Vudu this week, with Marvel’s Eternals debuting on digital on Wednesday, January 12. The 26th installment of the Marvel Cinematic Universe covers 7,000 years of the titular ensemble of extra-terrestrials protecting Earth from another race of aliens called Deviants. The epic story involves action, adventure, fantasy, science fiction, comedy, music and drama, but the core of the movie is a love story.

What are some of this year's Golden Globe winners to rent or buy?

The Hollywood Foreign Press Association announced this year’s Golden Globe winners in a private ceremony over the weekend, and some of the honorees are currently available to rent and/or buy on Vudu. Will Smith, the star of the tennis biopic King Richard, won the award for Best Actor in a Motion Picture — Drama. And filmmaker Kenneth Branagh received the Golden Globe for Best Screenplay for his autobiographical drama Belfast.

Disney’s latest, Encanto (the soundtrack for which is currently topping the charts), won in the Best Animated Feature category. Composer Hans Zimmer won the Golden Globe for Best Original Score for his work on Denis Villeneuve’s Dune. And pop star Billie Eilish and her brother, Finneas O’Connell, were honored in the Best Original Song category for their tune “No Time to Die” from the James Bond movie of the same name.

If you want to check out some of the non-winning titles from this year, Vudu also has Best Actress contenders The Eyes of Tammy Faye, Cruella and Spencer (with House of Gucci coming soon and available to pre-order) and the Best Actor nominee In the Heights. Other movies in the music categories include Wes Anderson’s The French Dispatch and the Aretha Franklin biopic Respect. Also, Disney’s Raya and the Last Dragon and Pixar’s Luca were both up for Best Animated Feature.

Can you recommend some Sidney Poitier movies on Vudu?

Speaking of Golden Globe winners, three-time honoree Sidney Poitier died this past week, and Vudu is spotlighting his career as an actor and filmmaker. Whether you’re already familiar with his work or need an introduction, you really can’t go wrong with most of the titles available. Poitier was the first Black man to win a Golden Globe and the first Black man to win an Oscar for Best Actor, both recognizing his performance in Lillies of the Field.

Prior to that achievement, Poitier was also Oscar-nominated and Golden Globe-nominated for his performance in The Defiant Ones. He would received Golden Globe nominations for his work in A Raisin in the Sun, A Patch of Blue and In the Heat of the Night. I also recommend going back to his first starring role, as a doctor in No Way Out, and his later breakthrough role as a teenager in Blackboard Jungle.

His other essentials include Guess Who’s Coming to Dinner, The Bedford Incident, To Sir, with Love (there’s also a decent sequel, To Sir, with Love II) and Sneakers. And you can see him in the documentary Nationtime, about the 1972 National Black Political Convention. Poitier also directed a number of movies, including the hilarious buddy comedy Stir Crazy, starring Gene Wilder and Richard Pryor, and Uptown Saturday Night.

Are we celebrating any big movie and TV anniversaries this week?

This week marks the 25th anniversary of the monster movie The Relic. Also, The Hand That Rocks the Cradle turns 30, the samurai film Lone Wolf and Cub: Sword of Vengeance turns 50 and the circus drama The Greatest Show on Earth and the Cary Grant comedy Room for One More both turn 70. Plus, three Humphrey Bogart classics are celebrating this week: Dead Reckoning turns 75, All Through the Night turns 80 and Black Legion turns 85. And Fritz Lang’s influential sci-fi masterpiece Metropolis turns 95.

More recent titles with anniversaries include the Anne Rice adaptation Queen of the Damned, which premiered 20 years ago. Also, Secretary, Orange County, Tadpole, Gerry, Better Luck Tomorrow, One Hour Photo, May, Narc, Love Liza, Bloody Sunday and Real Women Have Curves all debuted at the Sundance Film Festival 20 years ago this week.

This week, Vudu has an Animation Sale, featuring a lot of great titles, including the hilarious new release Ron’s Gone Wrong. I also recommend The Simpsons Movie, The Peanuts Movie and the underrated Blue Sky feature Robots, starring the voice of Robin Williams. You can also find deals in a bundling of all five Ice Age movies and a bundling of the two Rio movies — installments of both franchises are also available individually.

The latest Actors Spotlight showcases movies starring Oscar-winner Halle Berry, Ben Affleck, Kevin Hart and Zooey Deschanel. And as usual, I have recommendations for under-seen and/or under-appreciated titles for each: Warren Beatty’s Bulworth, for Berry; Boiler Room, for Affleck; the animated comedy Captain Underpants: The First Epic Movie, for Hart; and David Gordon Green’s All the Real Girls, for Deschanel.

What must-see movie is coming soon to Vudu?

Another movie with a lot of awards buzz and accolades this year, particularly for Best Actor honors, is Red Rocket. The National Board of Review named it one of the top films of 2021, and it’s currently up for two Independent Spirit Awards. This acclaimed comedic drama is coming soon to Vudu, with an expected digital release date of February 8, 2022. And you can pre-order the indie feature now in order to watch it as soon as it becomes available.

Written and directed by Sean Baker, of Tangerine and The Florida Project fame, Red Rocket stars Simon Rex as a former adult film performer who desperately returns to his small Texas hometown, broke and jobless. He moves back in with his ex-wife and her mother but also begins seeing a young donut shop worker whom he hopes to steer towards the pornography industry. It’s hardly the kind of story where you’re rooting for the main character, but that doesn't make it any less of a must-see movie.

King Richard, which just won a Golden Globe award for Best Actor, for Will Smith’s lead performance, is new to Vudu and has landed at #7 on this week’s top-sellers chart. Other newcomers to the list include Ghostbusters: Afterlife, which debuts at #1, Sing 2, which is close behind at #2, and the horror movie Antlers, which placed at #8. Fellow Golden Globe-winner No Time to Die is also among the top titles, ranking #4 this week.