What Is Tom Hanks' Best Portrayal of a Real Person?

This fall Tom Hanks stars as two real-life characters. In Captain Phillips, which opens Friday, he's the title figure, who was held hostage by Somali pirates in 2009. And in Saving Mr. Banks, out in December, he portrays none other than Walt Disney during the production of Mary Poppins in 1964. While the actor is most famous for playing a literary simpleton (Forrest Gump) and a fictional U.S. Army ranger captain in a World War II drama (Saving Private Ryan) and numerous comedic parts in the first half of his career, he has taken on a bunch of roles based on actual people, and he's only going to continue adding to this list -- currently he's attached to play Nazi-era U.S. ambassador to Germany William Dodd in the upcoming adaptation of Erik Larson's In the Garden of Beasts. 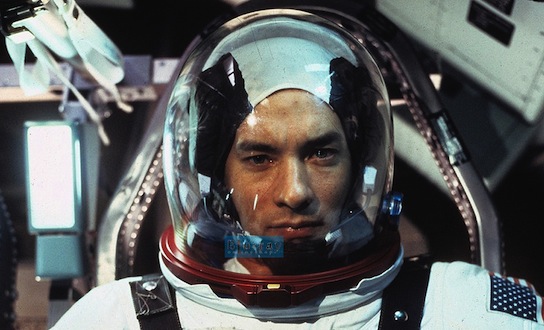 So, who are the real people Hanks has played in the past? Most notable is NASA astronaut Jim Lovell, commander of the title mission of Apollo 13. And as far as direct portrayals go, that was it until he played congressman Charlie Wilson in Charlie Wilson's War. He has also performed in roles known to be based on real people, however. Best example is the FBI agent he plays in Catch Me if You Can, the name of whom was changed very last minute from the real Joe Shea to "Carl Hanratty." And though his ethnicity and location is altered along with his name, Hanks' character in The Terminal is inspired entirely by true airport dweller Mehran Karimi Nasseri.

Philadelphia was partly inspired by the life of lawyer Geoffrey Bowers, the model for Hanks' first Oscar-winning role, though this was not acknowledged by the film until a lawsuit was filed against the producers. Although A League of Their Own is about a baseball team that existed, all the film's characters are fictional, and so Hanks' "Jimmy Dugan" shouldn't be assumed linked to real-life Rockford Peaches manager Eddie Stumpf. And in the TV miniseries From the Earth to the Moon, he plays an assistant to pioneering filmmaker Georges Melies, but the character was completely made up. Finally, and firstly for Hanks' career, there's the actual role-playing gamer James Dallas Egbert III, who was famously misrepresented in the media, which led to his being inaccurately an inspiration for the novel then movie of Mazes and Monsters.

On top of al those on-screen portrayals, Hanks also voiced the parts of Paul Revere, Daniel Boone and Abraham Lincoln in the 2003 PBS documentary miniseries Freedom: A History of Us and newspaper editor Al McIntosh in Ken Burns' miniseries The War. He also voiced an animated version of himself in The Simpsons Movie -- that counts, doesn't it?

Which of these based-on-real-life Tom Hanks characters is your favorite?