In the new movie The Family, Robert De Niro is back to what he's best known for: playing a gangster. This time, he's a mafia boss who enters the Witness Protection Program with his wife and kids after he snitches on others in the mob. And to give it an extended element of fish-out-of-water humor, the clan is relocated to a small town in France. His many wiseguy roles include another culture-clashing character in the comedy Analyze This and its sequel, Analyze That. The Italian-American actor has also played gangsters in The Godfather Part II, Goodfellas, Casino, Once Upon a Time in America and the animated Shark Tale, in which he voices a mob boss shark. In The Untouchables, he portrays one of the most famous gangsters of all time, Al Capone. He's also been many other career criminals of nonorganized sort, such as in Jackie Brown. 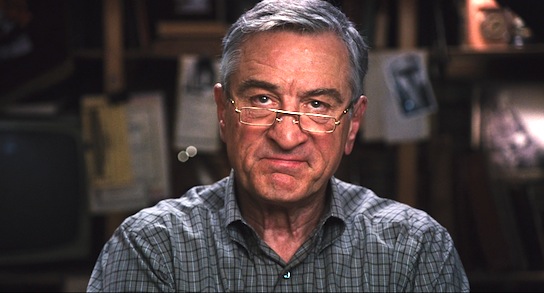 With such an extensive filmography as De Niro has, the number of gangster parts is very small, and yet we tend to associate him with the type anyway. To the point that movies like The Family and Analyze This seem to be responding to his image as a gangster-movie icon. We thought it would therefore be interesting to consider what other movies and roles he should be best known for. Chances are that many of you will go with another bad guy or antihero, say Taxi Driver's Travis Bickle, Heat's Neil McCauley or Cape Fear's Max Cady. Or, perhaps De Niro is gaining greater popularity now for his paternal characters in films like Silver Linings Playbook and the Meet the Parents series.

There are also those favorites that aren't so easily defined, like Rupert Pupkin in The King of Comedy, Harry Tuttle in Brazil, Leonard Lowe in Awakenings, Michael in The Deer Hunter and spin-doctor Conrad Brean in Wag the Dog. But we know you're most likely to go with that Oscar-winning favorite Jake LaMotta of Raging Bull.