Now that The Twilight Saga: New Moon has officially landed in theaters, we can finally put it those darn vampires and werewolves behind us (for now) and look ahead to the year's next mega epic release: James Cameron's Avatar. 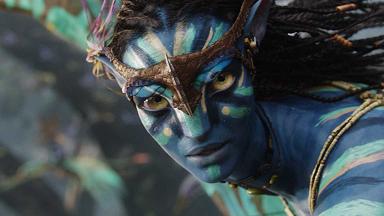 Over the weekend 20th Century Fox announced a 2.5 hour running time for the film, which is a bit shorter than some of Cameron's other movies (Titanic was over three hours), and that's due to IMAX theaters without digital projection only being capable of holding 170 minutes worth of film. Still, Cameron's final cut came in considerably less than 170 minutes, so I don't think he's compromised anything in order to get that sucker down in length. (And hey, the less we have to wait to go to the bathroom, the better – right?)
In addition to the running time announcement, there are a few Avatar-related videos you can watch. Two new behind-the-scene featurettes were released via Coke Zero and IGN UK, and you can check them both out over at SciFi Squad (though beware there's lots of new footage revealed – so if you want to try to go in blind, keep away). Also, James Cameron was the subject of a piece on 60 Minutes last night, which we've embedded below for your viewing pleasure. Enjoy.
So which film do you think will make more money: New Moon or Avatar?