Last weekend's opener, the box office hit Wall-E, has been proclaimed the best-reviewed movie of 2008 by /Film...but it was also great to see Wanted, the other wide opener and well-reviewed flick, come in at the $50+ million mark, too. With The Dark Knight upcoming, and Tropic Thunder and Pineapple Express still on the way, summer's still packing a lot of good heat. 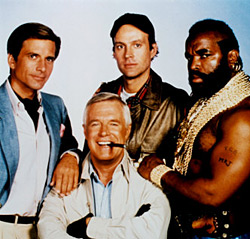 Moreover, for those who enjoyed Wanted, and are fans of '80s action TV show The A-Team, we've got some interesting information about the upcoming big-screen version, which is being penned by Wanted (and 3:10 to Yuma) writers Michael Brandt and Derek Haas. Our interview covers what it was like penning the current Angelina Jolie actioner, and what to expect from a 21st century A-Team. We're happy to report that the writers do have the show's diehard fans in mind, and aren't planning anything too "campy and cheap." While I'm sure the updated version of Mr. T's 'B.A.' Baracus will still get in some good quips, the project sounds closer to The Untouchables than something forgettable like The Wild Wild West.