No one can argue that Transformers: Revenge of the Fallen isn't explosive. It's bigger, louder, and Michael Bay is officially going down in the Guinness Book of Records for the biggest explosion on film with actors present. Popular Mechanics put together a Top 10 Movie Explosions of All Time list; it certainly pays tribute to directors who have a knack for fiery flamboyance. Although there isn't an existing category for that at the Academy Awards yet (they did, though, just add five more nominee spots for Best Picture), who can forget the Ghostbusters' flambé of Stay Puft? Or Terminator 2's Cyberdyne meltdown? Or The Dark Knight's hospital blow up? 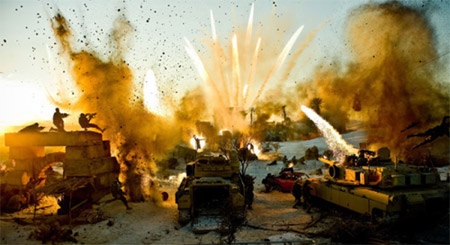 Do you have a favorite TNT moment that wasn't included in Popular Mechanic's full list? Sound off below.