Part Rachel Getting Married, part The Big Chill, Galt Niederhoffer's adaptation of her own novel, The Romantics, has a new trailer online courtesy of Apple. The movie premiered at the Sundance Film Festival this year where it was picked up by Paramount Famous Productions. 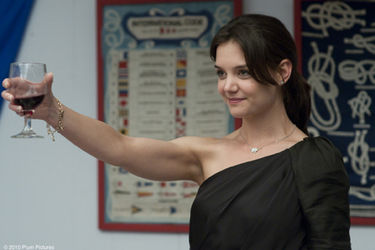 Starring Katie Holmes, Anna Paquin, Josh Duhamel, Malin Ackerman, Adam Brody and Elijah Wood, the film takes place over the course of one raucous night at a seaside wedding which reunites seven close college friends. Complications arise because the maid of honor (Holmes) and the bride (Paquin) have had a long rivalry over the groom (Duhamel).

Watching the trailer reminds of me of a 'this-is-our-last-night-together' ensemble movie like The Big Chill with a bit of a Sofia Coppola vibe to it.

What do you think? Are you going to see it when it comes out on September 10th?

Fandango Partner Relations Manager, has worked in the online content space for over ten years at MediaTrip.com, IFILM.com, and ReelzChannel.com. A member of the Producers Guild of America's New Media Division, John has produced and directed his own short films as well as numerous pieces of online vi