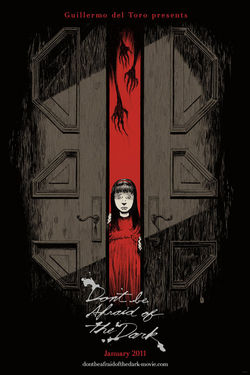 Are you afraid of the dark? If so, then this might not be the trailer for you to watch. The title reads Don't Be Afraid of the Dark, but that's pretty ridiculous since this film looks to give you plenty of reasons to fear the dark … and fear sliding your feet under a nice set of clean sheets. Produced by Guillermo del Toro and directed by Troy Nixey, Don't Be Afraid of the Dark is technically a remake of an early '70s flick, but something tells me they've updated it beyond the familiar premise.

Essentially this one follows a little girl who's sent to live with her father and new girlfriend, only to discover creatures living in their new house; creatures who want to claim this little girl as their own. The trailer itself definitely gives off a freak-tastic vibe, and you can immediately tell they're going for what I call "The Jump Factor" – meaning a lot of the film's scariest parts will happen suddenly, making it so you quite literally jump out of your seat.
And, yes, I will be checking underneath my sheets when I go to sleep tonight, thank you very much. Don't Be Afraid of the Dark is set to creep us out on January 21st, 2011, and it stars the pretty fascinating duo of Katie Holmes and Guy Pearce. Watch the trailer below...