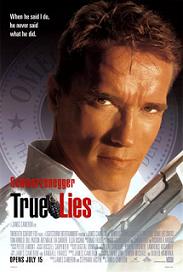 There's not a whole lot going on in the world of Tom Arnold, which is why I don't blame the guy for trying to drum up some more interest in a sequel to the pretty entertaining action-comedy True Lies, which starred Arnold Schwarzenegger, Jamie Lee Curtis and, of course, Tom Arnold. In a huge, sprawling New York Times piece on Tom Arnold (is news really that slow?), they talk about the comic actor's career ups and downs, as well as his return to stand-up comedy.

But things don't interest us until around page three when Arnold spits out a quote that would make it seem like he's reuniting with the old gang on a True Lies 2. He says, "All I know is Jim Cameron's making it and Arnold" — Mr. Schwarzenegger — "and I are going to be in it, and it starts shooting in 14 months, the day after Arnold stops being governor of California," he said. "It's not going to be called 'True Lies II,' but it might as well be. I can live with that."

I find it hard to believe that James Cameron – who's been busy revolutionizing the film industry with his upcoming 3D motion-captured sci-fi flick Avatar – is itching to reunite with Tom Arnold and a post-office Arnold Schwarzenegger on a film that has (as the Times puts it) "a still-to-be-determined plot and script." Sure, anything is possible in Hollywood – and maybe Cameron is interested in taking on some lighter fare after the all-encompassing behemoth that is Avatar – but c'mon, really?

On the flip side, if Stallone can make another Rambo movie, then maybe Governor Schwarzenegger can shoot a machine gun and bench-press some fictional terrorists. What do you think?