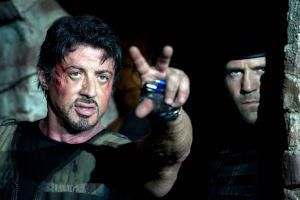 This Week in Movie News: Sylvester Stallone Joins ‘Guardians of the Galaxy Vol. 3,’ Ben Stiller to Direct ‘The Champions’ and More

Want to know what’s in theaters this week? Catch these exciting new releases on the big screen:

There’s something good, in your neighborhood — theater, that is — and it’s calling on you to get your tickets now. The highly anticipated sequel Ghostbusters: Afterlife opens this Friday, featuring a new generation of characters alongside some of the original Ghostbusters cast, including Bill Murray and Sigourney Weaver.

Joaquin Phoenix is back on the big screen for the first time since his Oscar win for Joker last year, in Mike Mills’ C’mon C’mon. The black-and-white drama follows a radio journalist (Phoenix) who is forced to bond with his precocious young nephew (Woody Norman) during a cross-country road trip.

You can also find Will Smith as the father of tennis icons Venus and Serena Williams in the biopic King Richard, Halle Berry in the sports drama Bruised, Ethan Hawke fighting terrorists in Abel Ferrara’s Zeros and Ones and Beach Boys legend Brian Wilson in the documentary Brian Wilson: Long Promised.

Get your tickets for those and other new movies here.

Sylvester Stallone returns to the MCU: After making a brief appearance in a mid-credits scene in Guardians of the Galaxy Vol. 2, Sylvester Stallone will reprise his role as the Marvel Comics character Stakar Ogord in Guardians of the Galaxy Vol. 3. The iconic actor behind such classic blockbusters as Rocky and Rambo personally confirmed his MCU franchise return on Instagram.

James Gunn, who wrote and directed the previous Guardians movies, is again at the helm of the next installment, which is due in theaters on May 5, 2023. Gunn and Stallone also previously worked together on DC’s The Suicide Squad, for which the actor voiced the part of the man-eating anti-hero King Shark.

Cate Blanchett and Ben Stiller are The Champions: Speaking of people in the Marvel Cinematic Universe, Thor: Ragnarok and The Lord of the Rings actress Cate Blanchett is teaming up with Zoolander helmer and star Ben Stiller for The Champions. Deadline reports that the movie will be based on the 1960s British sci-fi television series of the same name.

Stiller will appear alongside the Oscar-winning actress and also direct the picture. They’ll both additionally serve as producers. The plot of the original program, which ran for 30 episodes, follows a trio of special United Nations agents who receive super powers from an ancient Tibetan civilization in the Himalayas.

Riders of Justice redone: In other remake news, Free Guy helmer Shawn Levy is producing an English-language version of Riders of Justice for Lionsgate. According to The Hollywood Reporter, the redo will be scripted by the writers of the Danish original: Nikolaj Arcel and Anders Thomas Jensen, who also directed the first movie.

Like its 2020 predecessor, the action-comedy will follow a soldier who returns home to take care of his daughter after his wife is killed in a terrible disaster. When he learns that the incident might not have been an accident, the man teams up with some statistics experts and embarks on a personal mission of revenge.