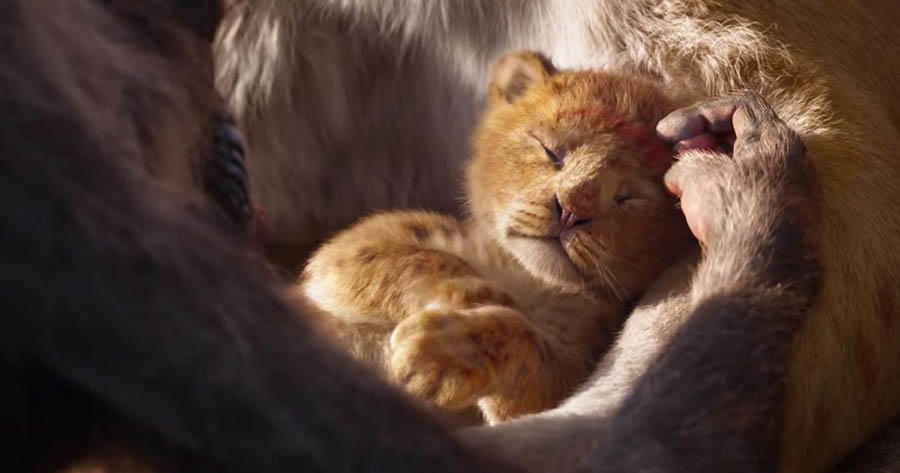 When filmmaker Jon Favreau invited Fandango and a number of other media outlets to visit the set of The Lion King, his latest foray into translating a now-classic Disney animated film into a seemingly live-action incarnation after the creative and commercial success of his prior effort The Jungle Book, a funny thing happened: while exploring the vast, grassy African plains in which many of the film’s sequences take place, this somewhat awestruck reporter ran smack into the side of a rhinoceros, who was fortunately unperturbed.

Here’s the funnier thing: neither the plains not the rhino were actually, physically real. Instead, they both existed within an elaborate, still-being-refined digital landscape that had been created within a computer network, and this reporter had entered the world via a set of high-tech VR goggles while wandering within the relatively compact confines of a set hidden inside a nondescript building on Los Angeles’ Westside.

And that’s the kind of imaginative, next-level filmmaking that Favreau’s embarked on while attempting to craft a fresh interpretation of the 1994 original, which then and now stands as the apex of Disney’s second Golden Age of cinematic animation. It’s also the kind of wild, groundbreaking experimentation that Walt Disney himself loved.

“It’s really a lot like being on a real location, and doing a rehearsal,” says Favreau, who has surrounded himself with a crew made of a meld of seasoned traditionalists well versed in shooting traditionally on a set – like cinematographer Caleb Deschanel (The Natural, The Right Stuff, The Passion of the Christ) – and tech-savvy innovators spearheading a new type of movie-making. The elaborate virtual landscape has been painstakingly created within the computer, but the crew is able set up shots as if their virtual location was the real thing.

“It has the feeling of a live-action shoot, because that’s the way I learned how to direct,” says Favreau. “It wasn’t sitting, looking over somebody’s shoulder or computer. It was being in a real location, and there’s something about being in a real 3D environment that makes parts of my brain fire that ‘fire’ on a real movie.”

“A lot of doing a movie is just walking around and talking, and so there’ll be six of us in there on set together – a production designer, DP, art department, ADs,” Favreau explains. “By having the tools here – like having a dolly with somebody who’s a dolly grip and a cinematographer operating the wheels, and having all people that would be on a real set, you have the same communication, the same chain of command, the same rhythm to the day. And also, little things start to happen because this is all key-frame animated based on real animals – we don’t do motion capture for performance, because we don’t want to do it, we don’t want to put markers on animals, we don’t want to involve live animals in this. In Jungle Book we didn’t have to. I think that’s a nice next step for movies: to leave the animals alone.”

Instead, when it came to populating the new iteration, Favreau and his team turned to another rich available resource – Disney’s Animal Kingdom theme park at the Walt Disney World resort. “They have all the animals from here in Animal Kingdom, and so we can go down there without interfering with them.” Rather than being scanned the various animals were modeled photographically, undisturbed. “They don’t even know we’re there, hopefully. So these animals are based on animals that are in Animal Kingdom, and then there’s reference: of course now there’s tremendous libraries online, and video.”

Once the visual for each animal character has been established, the digital creatures are melded with the performances and key characteristics of The Lion King’s all-star cast, which includes Donald Glover as Simba, Seth Rogen as Pumbaa, Billy Eichner as Timon, Chiwetel Ejiofor as Scar, John Kani as Rafiki, John Oliver as Zazu, Beyonce as Nala and – reprising his role from the original – James Earl Jones as Mufasa.

“What we’ll do for performance is, I’ll have the actors in a soundproof room. We have microphones, and instead of recording with music stands and a sound booth like we do in animated movies, I’ll instead have them performing standing up, almost like you would in a motion capture stage – except no tracking markers, no data, no metadata’s being recorded,” reveals Favreau. “It’s only long-lens video cameras to get their faces and performances, and that allows the mall to overlap and perform together and improvise and do whatever we want.”

It’s a technique that provides the director with both a comfort level in drawing out sharp, nuanced performance while also making room for innovation on the spot amid all of the unique, cutting edge technique.

“Much like how in Iron Man, I tried to have multiple cameras and let Gwyneth and Robert improv when I could, because there’s so much of the movie you can’t change, because it’s visual effects,” he says. “In the same way, we’re trying to create a naturalism with the scenes between the characters. But then sequences that are tied to music, they’re very much locked in like a music video, into shots that you have preplanned through the story department and through storyboards.”

Thus, Favreau emerges from each shooting day with a multitude of takes, which frees him up to make creative choices when assembling the film. “Since we’re using the techniques and approach of a live-action film, we deliver these dailies to the editor, who is selecting the best footage based on what we shoot – not just on what we plan, as you would do with a visual effects shot or an animated shot,” says the filmmaker.

“Especially for action sequences, if there’s a really good quick cut of a pan or the cameramen happen to catch a great moment or get a great frame, all of that is decided upon in post-production, even though it’s all happening concurrently,” he adds. “Just like motion capture tries to get anomalies of performance, what we’re trying to get is anomalies of photography…where the dolly might move too fast, or faster in one take so we have to back pan a little bit, or a happy accident happens. All those little subtleties.”

“It’s not anything I think anyone would notice consciously, but it starts to hopefully feel like you’re watching something that’s not a visual effects production, but something where you’re just looking into a world that’s very realistic, and emotionally feels as realistic as if you’re watching live creatures,” he says. “And that’s kind of the trick here, because I don’t think anybody wants to see another animated Lion King, because it still holds up really, really well. But what gave me some encouragement was the work we were able to do on Jungle Book. I saw it as a great opportunity to springboard, refine the tools, and do this process for this.”

“Using these techniques and really making the visual effects department a creative partner from the inception allows us to present visual effects, hopefully, in a way that you haven’t seen before,” says Favreau. “Just the spectacle of it, of if we can present something like a BBC documentary, on top of telling the story and having those two exist together…It’s nice to 25 years later, tell a story that still feel very relevant and music that really holds up to a new generation and introduce kids to it, and take full advantage of what’s available on the big screen and make a case for people to actually go to the movie theatre.”