The Five: Most Popular Robin Hoods

This weekend sees the latest version of Robin Hood hit the big screen, with Ridley Scott and Russell Crowe (Gladiator) teaming up yet again to entertain audiences with a story that's all-too-familiar by now. And it's familiar because Robin Hood has been around for decades, ever since the first recorded Robin Hood rhyme popped up in the 15th century. Through the years, several men have taken on the tough task of portraying the man who steals from the rich and gives to the poor, but when it comes to the movies, it's these five guys who will always stand out. 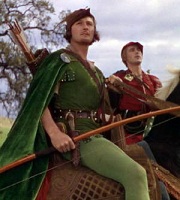 1.       Errol Flynn (The Adventures of Robin Hood, 1938) – This classic Robin Hood film is probably best remembered as being the most fun. Flynn set the standard for actors who would attempt to take on the iconic character moving forward, and while it lacks the big-budgeted effects we've come to expect in recent years, The Adventures of Robin Hood still manages to entertain all these years later with its perfect mix of romance, action and swordplay. In terms of the Robin Hood character, Flynn will always be my favorite.

2.       Brian Bedford (Disney's Robin Hood, 1973) – Bedford provided the voice for what is perhaps my favorite Robin Hood movie of them all. Disney's animated tale from the early '70s turned Robin Hood into a sly fox, who sung and danced his way through Sherwood Forest. Obviously this wasn't as serious as some of the other Robin Hood flicks (after all, it was a kiddie flick), but it was definitely one of the more spirited and energized versions, with each frame full of color and pizzazz. 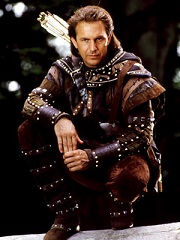 3.       Kevin Costner (Robin Hood: Prince of Thieves, 1991) – People always bash Kevin Costner's Robin Hood because of the cheesy early '90s Bryan Adams soundtrack that made Robin Hood into more of a Don Juan, and less of an rugged outlaw. But I've always held a soft spot in my heart for Costner's flick because, well, Costner is (and was) a pretty cool dude. Never much of an action hero, but this film definitely had its more enjoyable moments.
4.       Cary Elwes (Robin Hood: Men in Tights, 1993) – Two years after Kevin Costner's dramatic Robin Hood came this silly Mel Brooks comedy that transformed Cary Elwes into a flamboyant, over-the-top Errol Flynn look-a-like who pranced his way through to Maid Marian, only to find her wearing a ridiculously uncomfortable-looking chastity belt. Not exactly the quintessential Robin Hood movie, but easily the funniest interpretation we've ever seen. 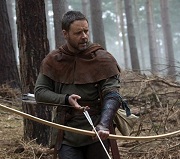 5.       Russell Crowe (Robin Hood, 2010) – Though the film first hits theaters this weekend, Russell Crowe could become the most lucrative Robin Hood if his film takes home more than $165 million (which it should). Ridley Scott's version of Robin Hood is not only the most historically accurate, but it's also the most brutal – with gory battle scenes and bloody mayhem spread out across its almost two-and-a-half-hour running time.
Which of these five Robin Hoods is your favorite? Sound off in the comments below …
Like it? Share it: