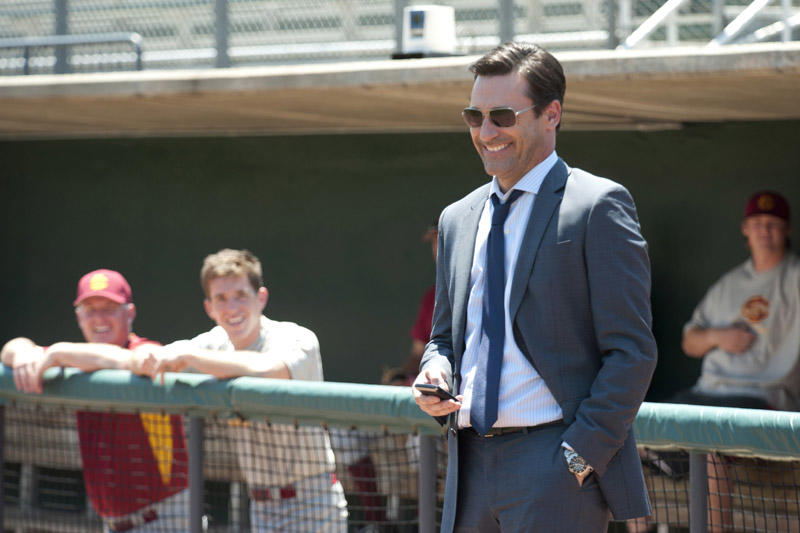 It's a cliche: before, during or after the big game, the sports team gathers in the locker room, usually when things look the absolute worst. And then someone (usually the coach) steps forward and says something that changes everything. The change isn't just in the characters on-screen… it's in you, watching from the comfort of your living room. Suddenly, you feel like you can take on the world!

Congrats, you've fell for a Motivational Locker Room Speech and you're not alone. These are the best of 'em.

It's one thing when an old white guy tells you to play your heart out. But when Dwayne "The Rock" Johnson tells you? Ohhh, boy. Now that's proper motivation. He may appear fairly gentle in this scene, but underneath that coach's uniform is the Samoan Hulk. You can't let the Rock down.

The Little Giants is a silly family movie, but if Rick Moranis' half-time pep talk to his team of misfits doesn't get you a little teary eyed, you're an inhuman monster. Rather than a powerful speech, he goes the direction of a loving father or skilled therapist, speaking to the kids on their level. Plus, it couldn't have gone any other way. Does Rick Moranis even know how to raise his voice in anger?

If this scene is any indication, there is nothing worse than Brad Pitt being disappointed in you. When he finds his team having a good time in the locker room after a big loss, he delivers a brief scold that will send shivers down your spine and remind you of those times when you let your father down. Yes, Brad Pitt is old enough to remind you of your father now.

Ugh. It's sooo sappy. Sooo sentimental. You can just feel the enamel peeling off your teeth. But wait… why are your eyes watering? Are you… are you crying? Did Billy Dee Williams' succinct but moving speech from Brian's Song just make your eyes leak liquid emotion? Don't worry, you are not alone.

When Samuel L. Jackson is proud of you, you know you've done something right! One of cinema's angriest men gets soft for this touching speech, throwing away his trademark scowl and transforming into that cool teacher you had in high school. The only question remaining is which one of those kids he'll recruit into the Avengers after the credits roll...

No poetry. Nothing flowery. Absolutely no B.S. The big speech in Rudy isn't that big at all, but that's the point. After an entire season of preparation, what more needs to be said before the big game? In this movie's opinion, superlong impassioned speeches are for chumps.

This one is a cheat because it doesn't take place in a locker room… but it seriously ups the ante for this kind of speech. Matthew McConaughey's coach doesn't just give his team a stirring call to arms, he drags them to the cemetery to visit the graves of the players his boys replaced after the original team was killed in a tragic accident. He doesn't even have to give the inspiring speech -- he's literally guilted his team into winning!

On paper, the big half-time locker room speech in Hoosiers isn't too special. It's fairly typical, sports-movie fluff that wouldn't be out of place in a lesser film. But lesser films don't have GENE HACKMAN, a man whose legacy demands that his name always be written in all caps. In the hands of an acting legend, the simplicity becomes poetry and you want to reach into the screen and make him your grandfather and best friend.

Most locker room speeches end before the two-minute mark. Short and sweet. Not the big speech in Any Given Sunday. Oh, no. Lead actor Al Pacino and director Oliver Stone aren't exactly known for subtlety and brevity, so this big speech goes on for a whopping four-and-half minutes. After a while, it stops being about football and starts being about the human condition and what it means to be a man and oh my God let's go play some football and kick some ass!

When Kurt Russell walks into a room, he immediately demands your immediate and undivided attention. There is never anyone more important than Kurt Russell when he is in your vicinity. If he tells you to skate out onto the Olympic ice and crush the seemingly superhuman Soviet team, you do so, no questions asked. The best part about this speech is how soft Russell is. You bring more pride to America with a carrot than with a stick.

Here's a challenge: try to watch Billy Bob Thornton's speech to his losing team during the finale of Friday Night Lights and try not to cry. In fact, try not to cry and then go lift a car over your head, because that's how pumped up you're going to be. There's nothing macho or grandiose about it -- it's just one man explaining that perfection is doing everything you can without giving up. If this speech was your phone's alarm sound, you'd wake up a better person every morning.

Infographic: The Anatomy of Godzilla

Infographic: The Anatomy of Godzilla