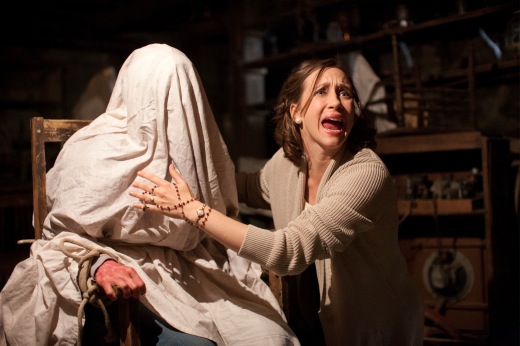 Wilmington, North Carolina in the middle of spring isn’t exactly frightening… unless you are referring to the potential heat that often sends locals scrambling to the confines of nearby, air-conditioned buildings.
It was in the vast, cool facilities at Wilmington’s EUE/Screen Gems Studios where a handful of journalists gathered on the set of James Wan’s The Conjuring, a haunted-house thriller Warner Bros. rips from vintage headlines about true-life supernatural cases.
Lorraine and Ed Warren were paranormal investigators who claim to have researched nearly 10,000 hauntings in the '50s, '60s and '70s. The curious couple was on the ground for the events that inspired The Amityville Horror. They reportedly exorcised two “werewolf demons” in 1983. And – in a case that came to be known as “The Witch Farmhouse” – the Warrens investigated the troubled Perron family, which is where The Conjuring begins.
Wan cast Vera Farmiga and Patrick Wilson as the Warrens. It’s the studio’s hope that if this picture, about the plight of the Perron family (led by Lili Taylor and Ron Livington), connects with an audience, a franchise derived from Warren case files could be born.
For now, here are the five most “terrifying” things we learned about Wan’s latest ghost tale, which arrives in theaters on July 19. 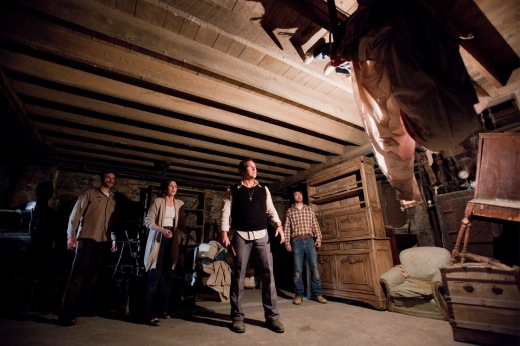 1. Wilmington, itself, might be haunted
Crew members kept stopping in to share stories of noises heard in the dead of night, or objects moving when no one was around. Of course, I was skeptical. Surely this was trumped up talk to scare visiting journalists.
“I don’t want to make up fake stuff, but it has been really weird some of the stuff that I have been hearing,” Wan told us during our interview. “Even Vera has said that from the moment she came on to do this movie, she’d always wake up between the period from three to four in the morning. She says she has been waking up every night in that period. … And I’m like, ‘No way.’ Because in the movie, there’s a very specific period where the witch character died in that time frame. And so I’m like, ‘No, that can’t be.’ Vera seems to have made this connection, though, and I do think that’s kind of cool.”
In fact, strange things occurred even before the cast made it to North Carolina. Producer Peter Safran shared a story about Farmiga receiving the script. What happened next sends chills.
“We’d sent her the script back in December and she’s in New York. James [Wan] is in L.A. So she read it immediately. We got the call from her reps, who said she loved it and wanted to get on the phone with James, or Skype the next day. … She went to sleep. She came back in the morning to get on her computer to Skype him and there were three deep scratches on her computer screen. Completely inexplicable. Like, they weren’t there the night before when she read the screenplay on the computer, but they were there in the morning. And there was just no way to explain what it was but stuff like that has happened constantly.”
2. There’s a witch. And she will haunt your nightmares.
Wan says he wants to use his witch the same way Steven Spielberg used the shark in Jaws. Pick your moments for maximum scares.
“You want to have those moments where [the audience] goes, ‘Did I just see that? Did that just happen?’ Which is the kind of filmmaking that I love. The kind of films that I love have a character walking down a hallway and you’re like, ‘Did I just see someone behind the drapes?’ I love that. I love the idea of playing with the audience, and being able to build on that [tension].”
3. The surviving Perron family members saw the witch on set. Things didn’t go well.
Ed Warren’s no longer with us, having passed away in 2006. Lorraine consulted on the film and visited the Wilmington set, as did members of the Perron family, who were friendly with producer Tony DeRosa-Grund. Their trip wasn’t the usual Hollywood glitz and glam.
“One of the [Perron kids] actually had quite a reaction when she saw the witch that we have, the character that they were supposedly haunted by,” recounts producer Rob Cowan. “I thought they’d be fine because they knew [it was fake], and it was in the middle of the daytime. Plus, everybody’s around, and they’re doing his makeup and fixing him up and getting him ready to do a scene. All of a sudden, one of [the Perrons] bolted over to [the set supervisor]. … It’s funny because we’ve been dealing with eight-year-old [actors], and she’s 50 or whatever. But she really had a bad reaction. It was quite interesting.”
4. Lili Taylor’s going to get possessed. Seriously.
If you caught the trailer for The Conjuring, you know – at the very end – that Taylor’s character, Carolyn Perron, encounters something wicked on the basement stairs.
When she met with us on set, Taylor opened up about her “possession makeup,” which will graduate over the course of the film from first stage (“Which is almost like, to me, I’m almost thinking about it like a flu, like I’m not feeling so great, but I’m still kind of here”) to second-stage possession and beyond.
“Second-stage possession, like the second stage of contacts are in, a little darker brown. I’ve got a little bit of stuff happening around the lips, like sores, some broken blood vessels… and I think I’m much more, almost as if, you know, you imagine almost the analogy of rabies, that the rabies is sort of, like I’m now thinking about how to get that rabies into somebody else.
“[There will be] very little CG. James [Wan] likes a lot of it… it’s old school, which is all so great. It’s pretty scary, the possession look.”
5. Wan’s template for The Conjuring? Vintage ‘70s horror.
If you are going to try to make a haunted-house story of demonic possession, why not aspire to reach the level of what’s arguably the greatest horror movie in Hollywood history, William Friedkin’s The Exorcist?
Taylor says her research kept bringing her back to that 1973 classic.
“What I love about The Exorcist was, you know, you can actually have depth and meaning, good acting, and interesting cinematography. I’m sort of thinking of [Ellen] Burstyn a lot, you know? Just a thought of her performance, [which] was just beautiful and surprising and unique and specific.”
And Wan adds that old movies like The Haunting informed the decisions he made on the Conjuring set.
“The film that I want to make is a more classical chiller. If you look back at the original Amityville Horror, I think it was kind of in-your-face for the time. But if you look back at it now, it’s definitely a much more moody piece. One of the big inspirations for me on this film is the feel of that period. Still one of my favorite movies is the original The Haunting. I love that style. I love that feel, and I want to take that feeling and apply it to this story.” 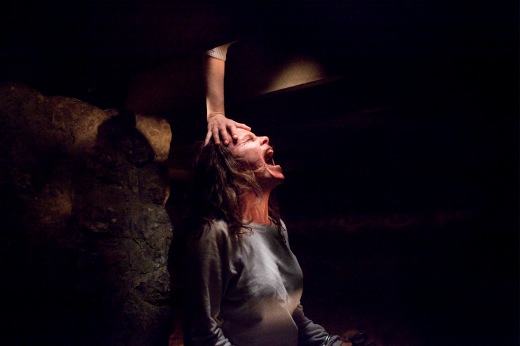 Next Article by Becky Bain

The Most Ridiculous Buddy Cop Duos in the History of Movies

The Most Ridiculous Buddy Cop Duos in the History of Movies