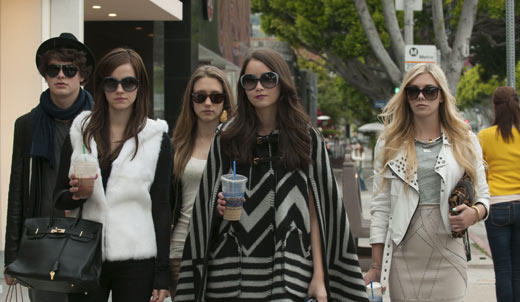 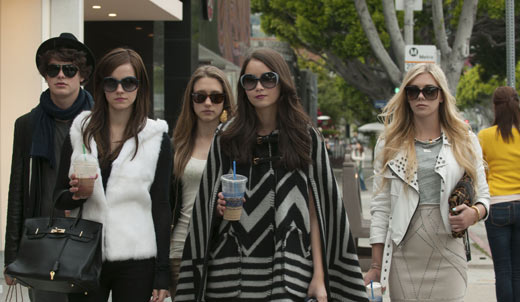 Before you post that E! News blurb glorifying Lindsay Lohan's latest run-in with the law on your Facebook page, just remember that it's a slippery slope. Thanks to today's endless fire hose of social media, we now have so much access to celebrities' lives that the lines between reality and reality TV have blurred beyond recognition. Everyone is clamoring to get their 15 minutes, and why shouldn't they—that's all that matters anymore these days, right?

Based on actual events, Sofia Coppola's latest film The Bling Ring takes a revealing and uncomfortably accurate look into the lives of several misguided and borderline sociopathic teens living in Los Angeles. Utterly consumed by the luxury lifestyles of their fave celebrities, they broke into the homes of some of Hollywood's hottest stars to go on shopping robbing sprees, eventually netting over $3 million in stolen luxury goods.

We sat down with the Oscar-winning writer-director to discuss The Bling Ring, the "lost" millennials, receiving music recommendations from Kanye West, and the pitfalls of celebrity culture and social media today.

Fandango: This movie was a great follow-up to Somewhere, where you touched on celebrity culture and the life of someone who's reached a level of celebrity. The Bling Ring, on the other hand, focuses on our culture's obsession with celebrity. Was that a natural transition for you to make?

Sofia Coppola: This was a continuation of that. I noticed during Somewhere how that celebrity culture and wanting to be famous was something that seemed to be around and it feels like it keeps growing. This is the flip side. Somewhere was so quiet and minimal, so I wanted to do something that was the opposite of that—hyped up and in your face.

Fandango: Without social media, do you think celebrity obsession would be happening on the scale it is nowadays?

Coppola: I do think that was a big part of this story. The kids were posting pictures on Facebook and that's how they got arrested. With Twitter, it seems, there are fewer boundaries between the fans and the people they're admiring; they know what they're eating for breakfast, they almost feel like they know them and can go into their homes. I think the boundaries are blurred—and we're talking about kids who don't think about things the way most adults do. I think there are fewer boundaries because of all this sharing and information.

Fandango: It's almost as if you have two lives: your relationships with those around you, and your thousands of social media "friends," many of whom you never see and may not have ever actually met.

Coppola: Yeah, it's wild! Also this idea of people having an audience; I notice people putting pictures on Facebook as if they're celebrities in their own world and are aware of their own audience. I think that's a very recent phenomenon to even think like that.

Fandango: You show the characters out at a busy club sitting next to each other, but rather than socializing, they're all on their phones updating their statuses.

Coppola: [Laughs] Yes, I noticed when I went to some clubs everyone was on their phones. Even at concerts you see everyone's not only documenting, but they're actively posting.

Fandango: People knew about this crime spree when it made headlines back in 2009, and even though you changed their names, your film will undoubtedly bring attention back to the real-life culprits. Is this something that you've given much thought to, potentially elevating their celebrity status further? 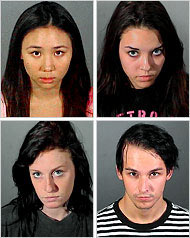 Coppola: Yes, that is why I wanted to change their names; I did not want to make them more famous for what they did. I thought it was an important enough story to look at even if it did bring momentary attention to them. We're seeing that the consequences they faced are not something that anyone would want.

Fandango: That's right, because reality really comes down hard on them at the end.

Coppola: Yeah when you look at what happened to their lives, it's not like they ended up with something that is positive.

Fandango: You used Frank Ocean's song "Super Rich Kids" on the soundtrack. In one verse he says: "We are the Xany-gnashing, Caddy-smashing, bratty ass" generation, obviously referring to Gen Y. Is there any hope for us?

Coppola: [Laughs] You have to be self-reflective in order to go forward. I actually talked to Kanye West when I was starting the soundtrack and he said that I should find out about that song. It was before the song had come out, so I was really happy we got it.

Fandango: Which track is your favorite on The Bling Ring soundtrack?

Coppola: Oh, it's hard to pick one song! I really like "Sunshine" by Rye Rye and M.I.A. I love driving around to that song. Our soundtrack is out now on Def Jam Records.

Fandango: As an indie director, which blockbuster are you most looking forward to seeing this summer?

Coppola: Oh, I really want to see The Heat, I think that looks really funny.

Fandango: Do you have a favorite reality-TV star?

Coppola: I don't… I kind of peek at them, but I don't really follow any of them.

Fandango: So if you had the power to permanently cancel one of the following reality-TV programs, which would it be: Keeping Up with the Kardashians, The Real Housewives of Beverly Hills or Toddlers and Tiaras?

Coppola: [Laughs] That's a big responsibility! It's so hard to choose… I have a friend who is obsessed with Honey Boo Boo, so I would not want to take that away… I guess the Housewives one because it seems like they're always fighting, but I'm not knowledgeable enough on them [Laughs].

Fandango: What song do you currently have on repeat?

Coppola: There is a Solange song called "Losing You." I really like that song.

Fandango: Are you very active on social media?

Coppola: I'm so cut off from the world! I don't, I feel like it would be opening a can of worms. It seems so time consuming.

The Bling Ring had a limited opening last weekend in Los Angeles (obviously) and New York, but expands nationwide this weekend. You can get your tickets here.

Exclusive 'Planes' Character Banners: These Heroes Have the Flight Stuff

Exclusive 'Planes' Character Banners: These Heroes Have the Flight Stuff