Action junkies, your movie has arrived. It's been a long time since I've seen a big-budget action movie that made me want to see it again, or more importantly, feel it again, for the action. Iron Man was fantastic, but a lot of what made it great was the character development and Downey Jr.'s star turn. The letdown, if anything, was the lackluster action finale pitting Iron Man vs. Iron Monger.

Indiana Jones? A lot of people were disappointed in the fourth entry in the series, but personally, I liked its consistent over-the-top silliness and felt like it was all of a piece alongside the other three. But the action? Too much CGI that never provided any real 'wow' factor or sense of literal danger. And while the Hulk has made some noise and coin at theaters, I think there's a danger in becoming too dependent on central characters that don't really exist except as computer animations (unless it's a Pixar movie). 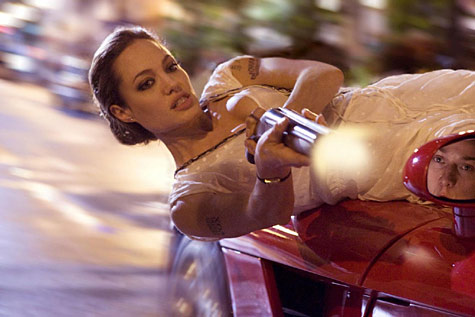 Which brings us to this week's latest foray in the genre, Wanted, based on another comic book, and directed by Russian whiz filmmaker Timur Bekmambetov. I'm a fan of his sci-fi/action/horror films Night Watch and Day Watch (sort of Russia's equivalent of the Star Wars, Matrix and Underworld series, rolled into one and shot up on steroids), but it was going to be interesting to see how Bekmambetov would fare operating in the bigger toybox of a major American studio release, surrounded by A-list movie stars (Angelina and Morgan Freeman) and plenty of box office expectation.

The answer: no problemo. This thing moves fast from start to finish, with hardly any letup at all to catch your breath, and that's a good thing. The action scenes are kinetic and dangerous, and the CGI for once is seamless. What's more, the director has expertly cast his lead hero, with James McAvoy pulling off the near impossible as a credible, sad sack accountant who morphs from believable wimp to even more believable assassin. Add in Jolie in fine fighting form as a fellow mercenary, and Freeman doing his Freeman best as their Yoda mentor, and you've got--pardon the pun--a killer movie. While Pixar's Wall-E will lead the charge this weekend, expect this explosive, thrilling, giddily entertaining popcorn flick to generate some good word of mouth and some long legs.

Video Clips:
The Limo Attack
Wesley Meets a Fox
Train off the Track
Rooftop Assassins
Shooting the Wings off Flies
Curving Bullets
Fox on the Hood of a Viper
Wanted Theatrical Trailer

DVD of the Week: 'The Hammer;' and More New Releases

DVD of the Week: 'The Hammer;' and More New Releases