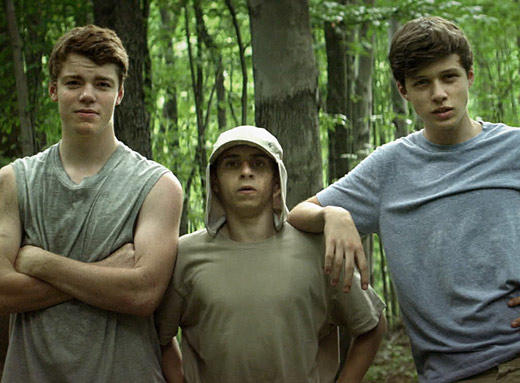 Sleepers to See: ‘The Kings of Summer’ Rules; Plus, We Talk to One of Its Stars 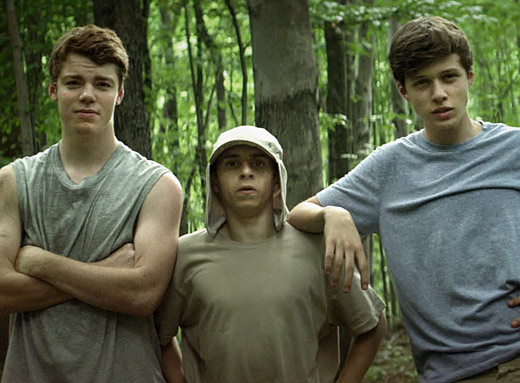 THE MOVIE: The Kings of Summer

THE DIRECTOR: Jordan Vogt-Roberts, a veteran of "Funny or Die Presents…", making his feature directorial debut.

THE STORY: In the Cleveland, Ohio 'burbs, three teenagers (at that awkward age when you’re no longer a child, but still can’t legally drive), are going stir-crazy spending summer vacation under their parents’ roofs.  Joe (Robinson) and his BFF Patrick (Basso) run away into the woods, followed by a non-sequitur spouting oddball named Biaggio (Arias), and build a castle fort where they make their own rules and live off the land—and by that we mean Boston Market’s rotisserie chicken, obviously. A few weeks of freedom later, though, trouble comes in the form of a pretty girl (doesn't it always, when it comes to teenage boys?).

WHY YOU SHOULD SEE IT: This "sleeper to see" is one you don’t want to miss—it opens in very limited theaters May 31, but expands to 20 additional cities next week.  First time screenwriter, Chris Galletta, penned a script so rich in nostalgia that audiences will relate to and cheer for Joe, Patrick and Biaggio as they navigate parental authority, teenage romance (or lack thereof) and friendship in true 14-year-old fashion. The young stars mark themselves as actors to watch in Hollywood while Nick Offerman zings one-liners that will have you rolling on the floor laughing.

THE BUZZ: Coming out of the Sundance Film Festival to rave reviews and comparisons to the coming-of-age classic Stand By Me, The Kings of Summer transcends the field of quirky, independent comedies of recent years with its quick-witted dialogue, excellent physical comedy (exceptionally displayed by Moises Arias) and the relatable frustrations experienced by the characters, specifically the awkwardness resulting from the adolescent transition into manhood that parents just don’t seem to understand.

IF YOU'RE A FAN OF…:  Coming-of-age films like Stand by Me and The Goonies, and John Hughes '80s movies, The Kings of Summer will delight.

THE INTERVIEW: Moises Arias, who also voices the new character Antonio in Despicable Me 2 and the Battle School student Bonzo in November's Ender's Game.

Fandango: First of all, congratulations on making a really beautiful film. What initially attracted you to Chris Galletta’s script?

Moises Arias: I had just finished filming Ender’s Game in New Orleans when I was sent the script and I thought it was really excellent. I was laughing out loud when I was reading it, especially the role of Biaggio, who was unlike any character I’d played before and I knew I wanted the opportunity to play him. There is a very fine line of knowing how much to do with a character and I’m just very, very excited about how people are reacting to it.

Fandango: And speaking of laughing out loud when reading that script, do you prefer to do comedy or just what feels right?

Arias: I love comedy, and to be honest I love drama, so to be able to do both would be my ultimate goal.  I just got the chance to do the most dramatic part I’ve done, which is on Ender’s Game playing Bonzo. That was a straight-dictatorship type of personality, whereas Biaggio is in his own world. I think Biaggio shows a different funny side and Ender’s Game shows an artistic, character side. Nonetheless, both of them are characters, which is what I’m very focused on right now, to find characters in scripts that I have to think about and fall into and make my own.

Fandango: You, Nick and Gabriel took improv classes together to help your chemistry, but did anything hilarious happen on the set that helped y’all bond further? 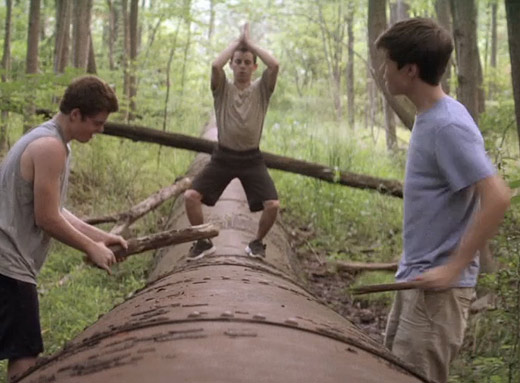 Arias:  Umm, well [laughs], I could only show up to one improv class, but honestly just being out in the middle of nowhere in Ohio in Chagrin Falls, the woods—that really bonded us. On our days off, a lot of the times the director would take us into the forest to shoot b-roll and just improvise stuff, which is actually [how we shot] the pipe scene, which has become one of the backbones of the film. Just things like that: going out into the woods, going crazy, jumping off stuff, climbing trees, just doing stupid things. Jordan made the weird decision of becoming our friend instead of our boss, so when he would yell "cut" we would punch him and play dead-arm. It felt like we were just having fun and I think you can see that onscreen.

Fandango: Biaggio was definitely the most gung ho and ready to survive the summer in the woods. Could you ever live in the woods for an entire summer—with or without a Boston Market, of course?

Arias: [laughs]! Helll nooooooooo! I would die within 3 days!

Fandango: Since we’re in summer blockbuster mode right now: is there anything in particular you’re really looking forward to seeing this summer in theaters?

Arias: Absolutely. One of my friend’s [Jaden Smith] movies comes out the same day as mine… After Earth looks fantastic! Man of Steel looks amazing, World War Z looks very interesting. I’m big on finding films that have heart, story and are different. Films that have people attached who about the project, finding things like that are really special.

You Choose: Your Favorite Will Smith Movie

You Choose: Your Favorite Will Smith Movie