Poll: Are You For or Against Another 'Major League' Sequel?

Now that Charlie Sheen is sobering up, it appears as if he’s trying to piece together another Major League sequel after hosting a screening of the original film at his house alongside several real-life baseball players. While the franchise has produced two fairly crappy sequels, the original Major League is still a great, guilty-pleasure comedy, and a lot of that has to do with Charlie Sheen’s performance as Rick "Wild Thing" Vaughn, the team’s out-of-control pitcher. 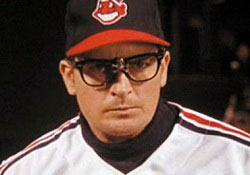 Major League 4 has been floating around for awhile now without much movement, however, so we don’t know whether this is all talk or the beginnings of something actually happening. David S. Ward, the original film’s writer-director, says that a script is complete and it brings back some of our favorite characters from the original franchise, while introducing three new players.
The idea would be to bring Sheen back as an older player who mentors a young up-and-coming pitcher who’s just as wild as he was. The plan from there would be to continue the franchise with these new younger players, though in order to do so (and not have them be straight-to-DVD sequels), they would need to populate the movie with fairly known actors.
Then again, this may just be all talk, which is why we want to know from you whether it’s a good idea to bring back another Major League movie. Would you see it and support it? Sound off below …
Like it? Share it: