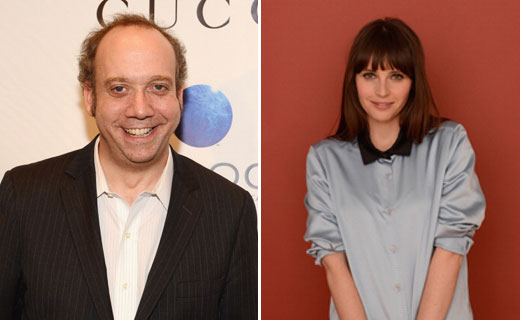 The Amazing Spider-Man 2 has already amassed quite a talented cast and it looks like they're not done adding actors.

THR is reporting that Paul Giamatti and Felicity Jones are both in talks to join the Marc Webb helmed sequel. Giamatti is in negotiations to play the villainous The Rhino while Jones' role has been unspecified, leaving many Spidey fans to speculate who she could be playing.

Emma Stone is returning to play Gwen Stacey and Shailene Woodley was cast late last year as Mary Jane Watson. Could Jones be playing Betty Brant? Maybe Felicia Hardy/Black Cat? Sound off with your thoughts below.

With J.J. Abrams now secured as the director for Star Wars: Episode VII, Disney has decided to ditch two upcoming 3D re-releases of Epsiodes II and III. When Disney acquired LucasFilm late last year, the studio moved up the re-releases to within months of one another; Episode II was scheduled for late September with Episode III following weeks later in October.

LucasFilm released a statement this afternoon saying, "We will now focus 100 percent of our efforts on Star Wars: Episode VII in order to ensure the best possible experience for our fans. We will post further information about our 3D release plans at a later date."

Were you looking forward to the re-releases or are you glad Disney is putting all their energy and focus on the new Star Wars movie?

For anyone who thought the upcoming remake of Evil Dead was going to be tamed down for mass appeal, think again. Following a gorey red band trailer that appeared online earlier this month, Fede Alvarez tweeted that his film received an NC-17 rating from the MPAA.

Alvarez ultimately had "to cut stuff out to get an R rating and get the film into theaters," but the NC-17 material will definitely be a part of the film's home video release.

Would you rather have had the film remain NC-17 or are you glad Alvarez cut some stuff out to lock the R rating?

Poll: Vote on Most Overrated Movie, Most Welcome Appearance by a Former 'Friday Night Lights' Star and More!

Poll: Vote on Most Overrated Movie, Most Welcome Appearance by a Former 'Friday Night Lights' Star and More!