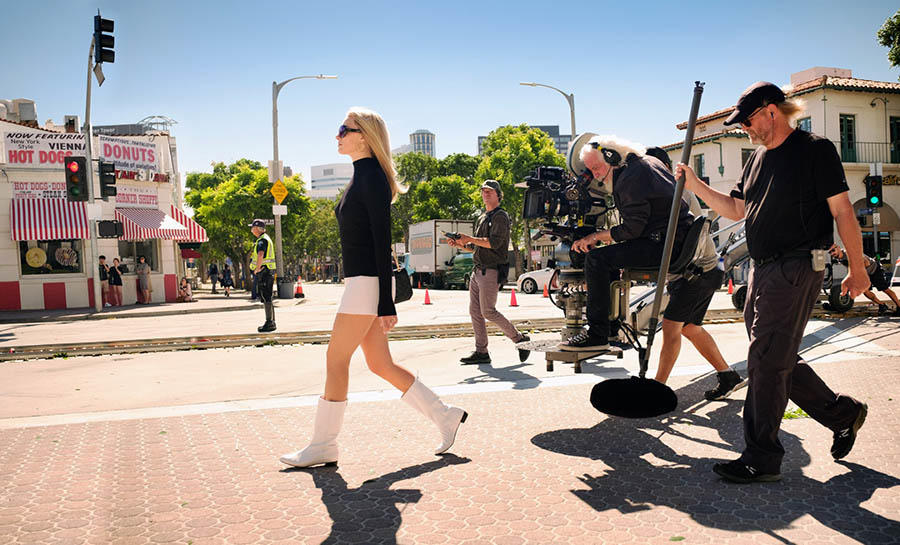 'Once Upon a Time in Hollywood': Top 13 Locations 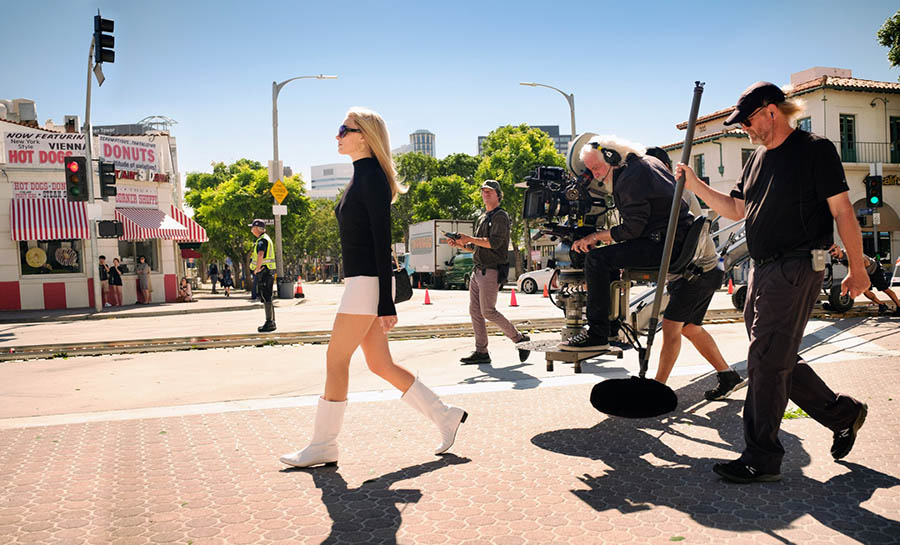 There are no plot spoilers in this story, but before reading it, you should buy your ticket on Fandango to see Once Upon a Time in Hollywood with fresh eyes - and then relive the experience with our movie location map below.

The title of Quentin Tarantino's ninth film, Once Upon a Time in Hollywood, suggests that a certain nostalgic place and a historic time will be explored. As in Tarantino's eight previous films, however, we have no doubt that the story will take us places we never expected to see.

Tarantino taps into a remarkable period of time when Los Angeles was, yes, home to many screen professionals, but also served as a thriving hotbed for a growing counterculture of rebels, rabble-rousers and revolutionaries. Soaking in the classic atmosphere of that wild period of time is integral to the film's allure, and it was the responsibility of Rick Schuler, a veteran location manager, to find places that most of us have only seen on the big screen.

The memorable work of unsung location professionals is often under the radar in Hollywood, but these hard-working men and women help shape the images film fans see on the big screen, and Schuler’s contributions to Once Upon a Time are no exception.

Schuler, who has served as Location Manager for three other Brad Pitt movies - Se7en, Fight Club and Mr. & Mrs. Smith - along with the Oscar-nominated Best Pictures The Social Network, Her and A Star Is Born, shared 13 of his top locations from Once Upon a Time in Hollywood with Fandango. 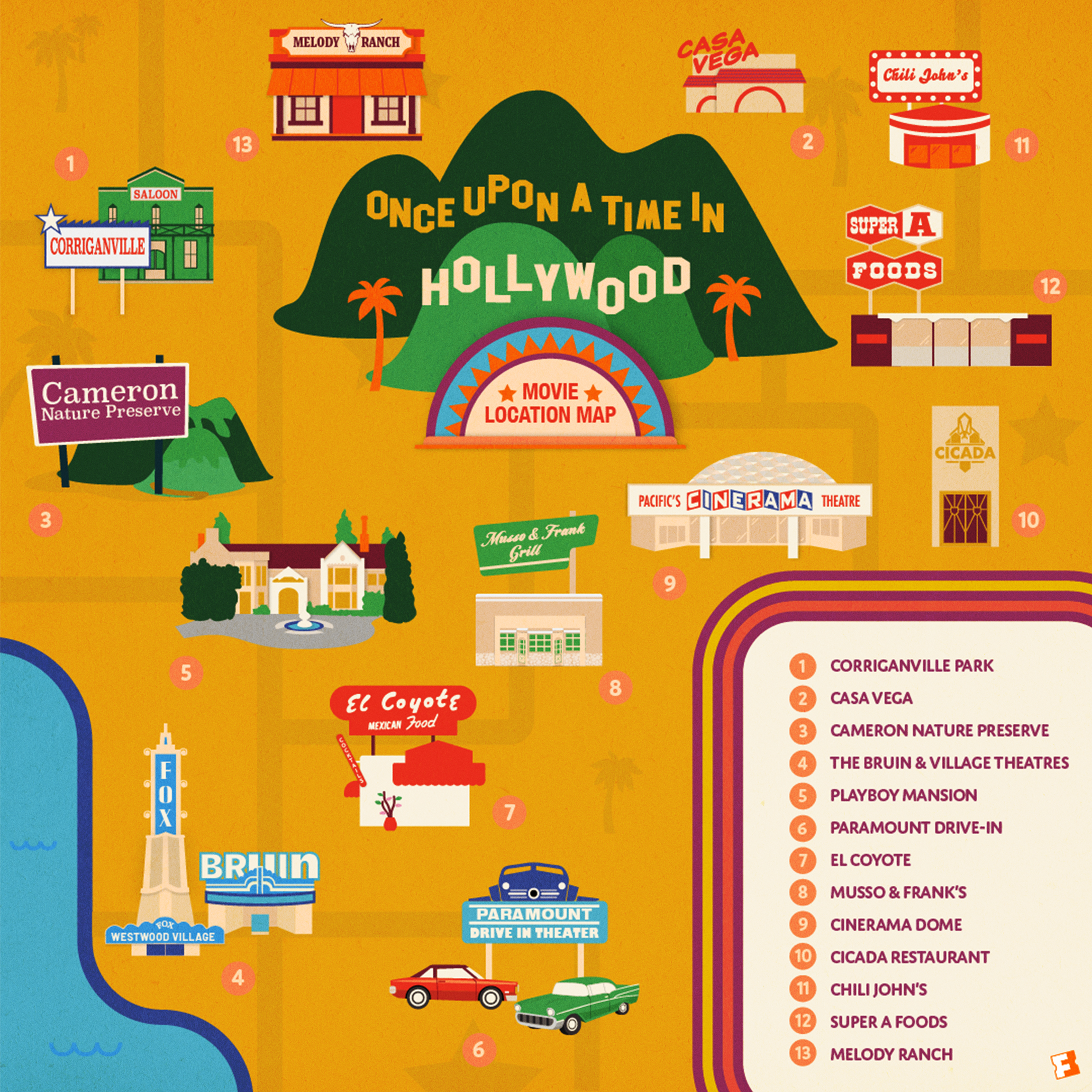 1. Corriganville Park (doubling for the nearby Spahn Ranch, the Manson family hideout)

"We had originally hoped to film at the site of the real Spahn Movie Ranch in Chatsworth, but the property had been completely bulldozed over as if to eradicate it from history. Just down the road, however, was the site of the old Corriganville Movie Ranch, now a public park. Like the Spahn Ranch, it had once featured a Western-themed set (Corriganville was even a setting for John Ford’s Fort Apache). The lay of the land afforded our incredible production designer Barbara Ling a chance to position the house of George Spahn (played by Bruce Dern) on a hill at the end of a road near the Santa Susana boulders, helping set up tension for a scene."

“Leonardo DiCaprio and Brad Pitt meet here at Table 5 in Casa Vega’s family dining room for a drink on that fateful night in August 1969. Dating back to 1956, Casa Vega is a classic red-leather-booth Mexican restaurant that recently named a drink in Quentin’s honor. “The Tarantino,” a concoction created by the director himself, is composed of Casamigos Anejo tequila, orange juice, lemon juice, agave nectar and additional secret ingredients.”

"In a recreation of the 1960s ‘The F.B.I.’ TV series, Leonardo DiCaprio (as Rick Dalton) fights the bad guys from the back of a pick-up truck here in the Puerco Canyon area of Malibu.  Director James Cameron’s 703 acres of donated land, now part of the Mountains Recreation and Conservation Authority for the Santa Monica Mountains Conservancy, was used for these action scenes, even though it was not a location for the original show.”

4. The Bruin and Village Theatres

"Margot Robbie as Sharon Tate parks her car at the 1931 Fox Village Theater parking lot (good luck finding a similar parking space there today) and walks over to the 1937 Bruin Theater (named after the mascot of nearby UCLA) to see herself on the big screen in the Dean Martin spy comedy, The Wrecking Crew. In an ironic bit of surrealism, Once Upon A Time in Hollywood is playing at The Bruin on opening weekend, so Robbie could conceivably go to the same theater to watch herself watching herself.”

Tickets for the Regency Bruin are available here on Fandango.

“In the movie, Margot Robbie as Sharon Tate visits a swinging party at the Mansion, home of the late Hugh Hefner. This is a private residence today, so please respect the privacy of the negibhorhood (all you can see from the street is a non-descript gate), but film fans can visit nearby Holmby Park.”

"When Brad Pitt heads home, we find that he lives in a trailer next door to this classic drive-in theater, which in the movie plays the long-gone Van Nuys Drive-In. Located in the city of Paramount in southeast Los Angeles County, this theater is still going strong as a drive-in, offering first-run movies each week.”

"Margot Robbie as Sharon Tate and friends have a good time together at this landmark Mexican cafe that dates back to 1951.  We filmed at the same booth where Tate tragically had her last meal on August 8, 1969.”

“Down the street from El Coyote, where Margot in Once Upon a Time notices the Klieg lights of an adult movie premiere, is the New Beverly Cinema. A movie theater since the 1920s, the venue has been a revival house since 1978 and owned by none other than Quentin Tarantino himself. Always guaranteeing screenings in 35 mm, the ‘New Bev’ is one of L.A. cinephiles’ favorite places to see classics and cult films alike.”

"DiCaprio and Pitt meet up with Al Pacino for a drink at this most of iconic of industry locations and Hollywood’s oldest eatery, since 1919. It is in the rear parking lot where Leo declares to Brad that he is a ‘has-been.’ The owners of this establishment have meticulously maintained the period-ness of this wonderful building. Look for a beautiful vintage mural on the wall of the adjacent building that was left behind for all to enjoy.”

"DiCaprio and Pitt drive by the theater where the premiere of Krakatoa, East of Java is taking place. This classic location, now part of Arclight Hollywood, is seen in a ‘light up the signs’ montage along with a Der Weinerschnitzel in Long Beach and a Taco Bell in Tustin that were meticulously restored to their late 1960s looks. Other Hollywood area cinemas glimpsed in the movie are the Chinese (where Once Upon a Time had its premiere), Vine, Vogue and Pantages theaters.”

Tickets for Once Upon a Time at the Arclight Hollywood/Cinerama Dome are available on Fandango here, and at the TCL Chinese Theatres here.

"Cicada, once known as Rex, has hosted numerous film shoots, including the famous Julia Roberts escargot scene in Pretty Woman. In Once Upon A Time, Cicada’s classy foyer serves as an international art deco restaurant where Leo as Rick Dalton is confronted by a swarm of paparazzi."

"This Burbank retro diner, with its U-shaped counter, has been serving hungry café patrons since 1946. In a seamless conflation of film location editing, Brad Pitt encounters a hitchhiking Manson girl, Pussycat (Margaret Qualley), in front of Chili John’s and Jackalope Pottery (10726 Burbank Blvd in North Hollywood) in the same scene, even though the two locations are two miles apart from each other."

"An Oscar-winning song was written in the parking lot of this midcentury grocery market, at least that’s how it took place on the big screen. This is where we filmed Lady Gaga working on ‘Shallow’ in Bradley Cooper’s A Star is Born. I returned to Super A for location work in Once Upon A Time, for an opening scene showing Manson family members dumpster-diving for food on their way to the Spahn Ranch."

“The only way you can visit Gene Autry’s Western movie ranch, usually closed to the public, is through a VIP group tour. This location appeared as the main set for the western TV show, ‘Lancer,’ in Once Upon A Time. Tarantino previously used the Western town for Django Unchained.”

BONUS Location: New Beverly Cinema “As part of our preparation for filming Once Upon A Time, Quentin unspooled numerous classic movies at his own theater, the New Beverly Cinema, 7165 Beverly Blvd. Although we did not actually shoot here, it was a key site for our education on late 1960’s cinema. Quentin often spoke before each film and offered free popcorn, soda and beer for the crew on Sunday afternoons for five to six weeks.”

Fandango’s on-demand video streaming service, FandangoNOW, is curating a list of Quentin Tarantino’s Picks That Inspired the ‘60s Vibe of Once Upon A Time, including movies like Paul Mazursky’s Alex in Wonderland and Bob & Carol & Ted & Alice, plus Easy Rider, Valley of the Dolls and Model Shop.

Once Upon a Time in Hollywood will open in theaters everywhere on July 26. Get your tickets today!

For more Once Upon A Time In Hollywood, check out the cast sit-down with our friends at Today.