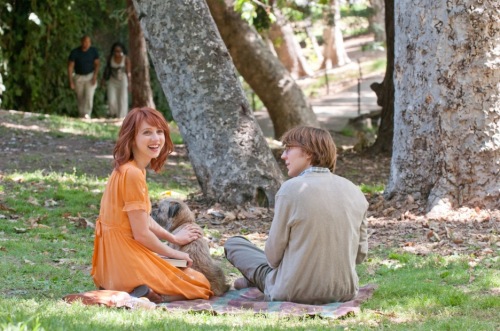 A couple of trailers for anticipated, upbeat comedies will be attached to movie prints heading to theaters this weekend, but we’re getting the jump and bringing them to you ahead of time.
We’re hearing great things about Ruby Sparks, a fictional romance of sorts between a frustrated writer (Paul Dano) and the beautiful girl who shows up at his front door (Zoe Kazan). Here’s the twist: Kazan’s character mirrors the woman Dano’s writing about in his unpublished novel, and whatever he writes about her on the page comes true in real life.
Kazan wrote the Ruby screenplay, and then recruited the great Jonathan Dayton and Valerie Faris to direct. (They teamed on Little Miss Sunshine, also with Dano.) But the real selling point on Ruby, from what we’re hearing, is the on-screen chemistry between Dano and Kazan – a couple in real life.
Can you spot it in the film’s first official trailer? Watch below and see for yourself. Ruby Sparks will open in limited release on July 25.
Pitch Perfect, meanwhile, already is being described as Glee meets Step Up by way of Bring It On, with Anna Kendrick playing a college freshman who’s recruited to join a competitive a capella group. Based on the harmonies on display in the first official trailer, that might not be such a bad thing.
Jason Moore infuses attitude (and some dirty humor) into the story of underdog singers fighting their way to regionals. (Seriously, can you say the word “regionals” and not call Glee to mind?) Kendrick and Brittany Snow look like they’re ready to bounce off of each other, while Bridesmaids funnygal Rebel Wilson appears ready to steal the whole show as Fat Amy.
The supporting cast also is red hot. Elizabeth Banks, Christopher Mintz-Plasse and John Michael Higgins should keep the comedy rolling, though most likely will show up for the musical numbers. They’re on display in the clip below, so check them out.
Pitch Perfect doesn’t reach theaters until Oct. 5, but what do you think so far?

Yes, They're Making a Movie Out of Tom Clancy's Splinter Cell

Yes, They're Making a Movie Out of Tom Clancy's Splinter Cell