From Stacie Hougland: DVD of the Week: If you can endure the stomach-churning first 10 minutes of shaky-cam, you're in for a sci-fi/horror thrill ride of monstrous proportions with Cloverfield.

When a giant monster attacks Manhattan, a group of 20-somethings celebrating their buddy Rob's (Michael Stahl-David) going-away party find themselves on the run, first to Brooklyn, then back to the city in search of Rob's galpal/love Beth (Odette Yustman). His best friend Hud (T.J. Miller, who worked the camera for real) chronicles the disaster, as the monster decimates buildings and crushes cars and people with abandon. 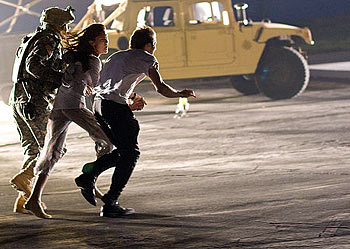 Run for the hills...

Cloverfield demands you don’t ask the following questions: Unless you’re Geraldo Rivera, would you go running toward rather than away from almost certain death? Are you really keeping that camera not just on, but focused and aimed at the events around you? Suspend your disbelief as these kids follow the bad-decision handbook to the letter.

This creature feature takes the Blair Witch conceit to new levels, displaying spectacular, seamless effects with remarkable success despite Hud’s mostly grainy, dark, up-down-all-around video. Where disaster flicks typically portray horror on a massive level, Hud’s camera brings it up close and personal, showing with startling realism what it might really be like as an everyday New Yorker suddenly having to leap out of the way as the Statue of Liberty’s head crashes onto the street two feet away, or navigate through a throng of panicked people crowding the bridge to Brooklyn.

Extras: Cloverfield’s all about the special effects, so definitely check out the featurette about how they were made with the director and visual effects crew. Also director commentary, obligatory making-of featurette, four deleted scenes, “Clover Fun” gag reel and (fairly unrevealing) alternate endings.“I Saw It” deals with the monster‘s creation.

You might also want to know different retail stores will carry different editions of the DVD (none, unfortunately, are Blu Ray). Suncoast and FYE's edition comes in a collectible steel case. Best Buy's will contain an extra disc with 30 minutes of behind-the-scenes footage with "Hud." Kmart and Sears will have a free ringtone. And Target's will contain a CD with "Rob's Goin' To Japan" party mix, with songs by OK GO, Goldfrapp, Bright Eyes and more.

Overview: One of the most intense, enjoyable monster movies ever, Cloverfield thrills and chills—if you can get past the handheld camerawork.

Also New This Week:
The Orphanage: Acclaimed director Guillermo del Toro produced this first effort by fellow Spaniard J.A. Bayona, and if you missed its somewhat limited theatrical release, run, don’t walk, to pick up the DVD. A spine-chilling supernatural thriller with a twist you won’t see coming, it tells the tale of a woman who returns with her husband and young son to the mysterious seaside orphanage that she left as a child and unwittingly unleashes an evil spirit upon her family. Shocking, unnerving and hauntingly sad, this terror-ific film will stick with you days afterward. Extras include a featurette on the construction of the orphanage.

Charlie Wilson’s War: Tom Hanks stars as a good ol’ boy politico who chases women and consumes his fair share of the booze while managing to supply freedom fighters in Afghanistan with money and weapons. A liberal Democrat, Wilson teams with a right-wing socialite (Julia Roberts) and a CIA agent (Philip Seymour Hoffman) to stave off the growing Soviet threat. Based on a book of the true story, the film may be a bit simplistic, but the story fascinates with top-notch performances across the board. Don’t miss the featurette about the real Charlie Wilson.