Few things are worse than talking animal movies. With the exception of Babe way back when, most of them are teeth-grindingly bad. What's the appeal of some poor pup looking like his mouth's been stuffed with peanut butter as Jim Carrey or Ellen hides behind the screen reading his words? There's something disconcerting about watching CGI-enhanced critters badly lip the voices of people whose faces we know so well. 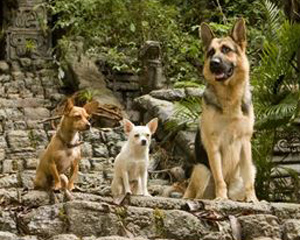 That said, I begrudgingly admit Beverly Hills Chihuahua wasn't the worst way to spend a couple hours, if you take it for what it is -- cheesy, G-rated, opposite-of-subtle entertainment that at the very least will keep your own dog riveted (mine couldn't look away). Drew Barrymore, George Lopez and Andy Garcia have fun personalizing the lovable canines and the story entertains, even as poor Jamie Lee Curtis looks a bit pained as the Beverly Hills maven who entrusts her beloved Chloe to her careless niece (Piper Perabo). If you can live through musical mutt montages and slapstick antics, and you have kids or dogs, Beverly Hills Chihuahua is worth a look.

Australia Baz Luhrmann's ambitious if uneven adventure romance harkens back to the glory days of Old Hollywood, with Nicole Kidman in the role of a headstrong Englishwoman in Australia who hires a cocky cowboy (Hugh Jackman) to help drive her cattle herd across the country. Is it a Western? a World War II pic? oddball rom-com? All of the above, featuring two gorgeous stars.

Watchmen: The Complete Motion Comic Just in time for the hotly anticipated Watchmen movie this weekend comes this intriguing release -- it's the graphic novel onscreen, literally. Overseen by Watchmen writer Dave Gibbons, the DVD contains all 12 30-minute chapters of the graphic novel, adding a very little bit of motion plus voiceovers and sound to the strikingly drawn comic panels. If you're a hardcore fan (or if comic books can't keep your attention), this is a great way to learn and experience the story. Also on Blu-ray.