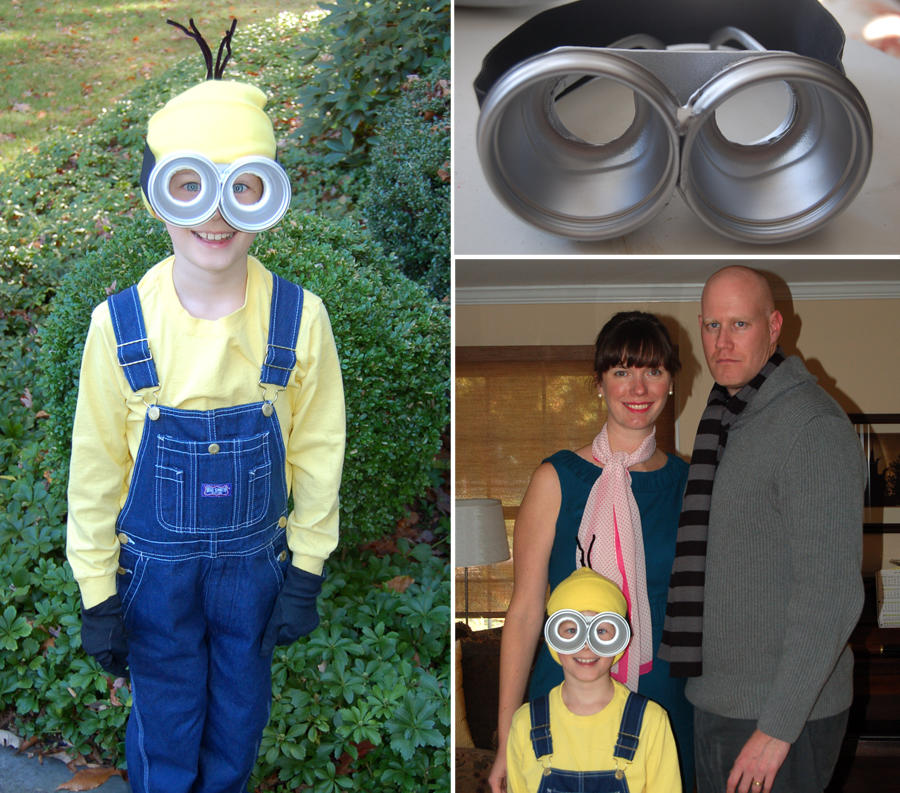 Every year since our son was born, we’ve made it a tradition to dress up as a family for Halloween. Our neighborhood has a huge block party that draws trick-or-treaters from all over town, and the ensuing parade of costumes is always impressive. There's definitely some self-imposed pressure to do something unique, but it’s also just plain fun. Our son turns five just after Halloween this year, and we know that before too long he won't want his parents tagging along in costume, or possibly at all.

These early years of childhood go by way too fast — so even though homemade family costumes can be a lot of work, the fun and the memories (and great comments we get) are totally worth it. Whether it's for a party, trick-or-treating or just handing out candy, making your own costumes can be a fun endeavor for the entire family. And there's no better place to look for inspiration than the movies! I've found some great costumes from families who clearly love to get creative for this horror-filled holiday. All of the costumes were inspired by movie characters and involve at least some DIY elements. Check out these creative clans and read tips on how you can get the look, too. 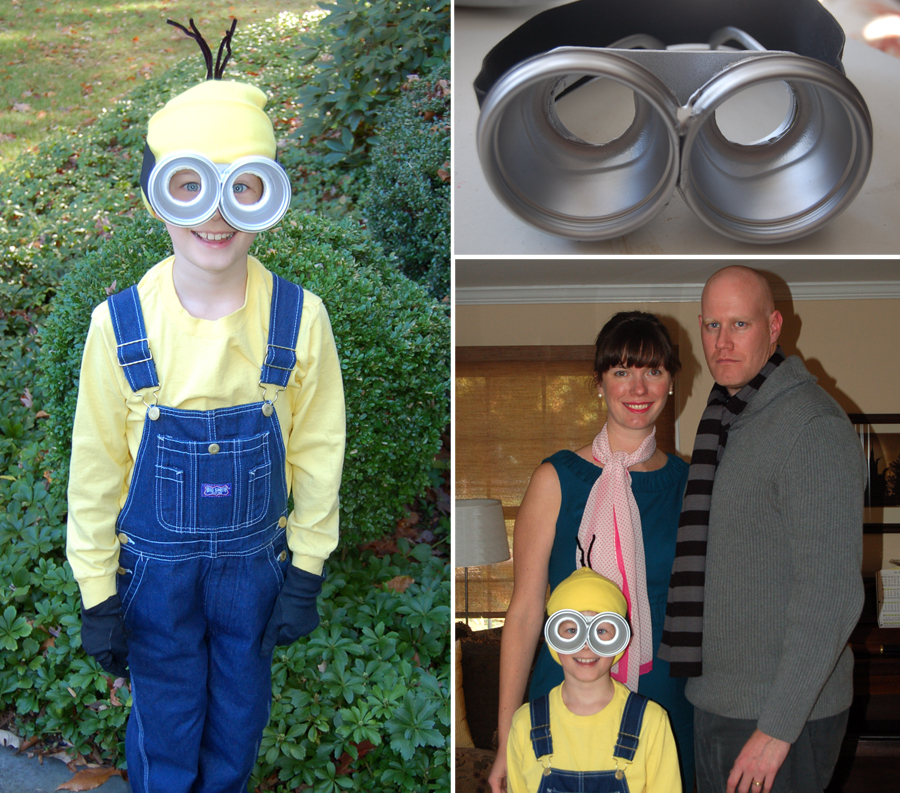 Gru, Lucy and Minion from Despicable Me 2

In addition to enjoying the Despicable Me films, stay-at-home dad Chris had started referring to his kids as his "minions" as a fun way to motivate them out to the car, to the dinner table, etc. And with both Dad and Gru being bald, dressing the family as the cast of DM2 was a no-brainer.

Get the look: The goggles were created by cutting the bottoms off Glad storage cups, then hot gluing them to a pair of round costume glasses, spray painting silver and finishing with a black elastic Velcro band. Dress your Minion in a yellow sweatshirt and overalls, topped off with a yellow ski cap with black pipe cleaners pushed through the top for hair. 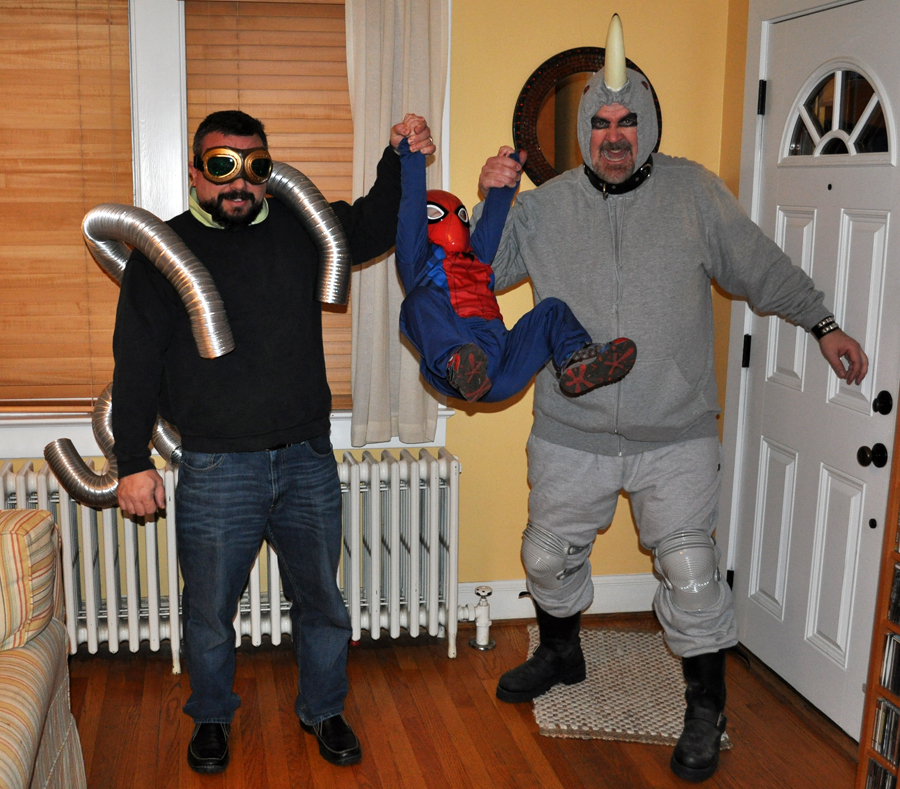 Spider-Man, Doc Ock and Rhino from the Spider-Man films

Graphic designer Brent had raised his son to be a comic book fan, so it was no surprise that as Halloween drew closer, his four-year-old was having a hard time deciding between Batman and Spider-Man. Knowing Daddy and Papa would be playing the "bad guys," Brent was able to successfully coax his son into choosing the wall crawler, as both parents wanted to avoid having to don white face paint and green hair dye.

Get the look: Doc Ock's tentacles are made from aluminum duct piping found at the hardware store. It’s secured to a pair of suspenders with wooden paint stirrers and a lot of duct tape. Rhino's horn is from a plastic Viking helmet, which was then pushed through a slit in the top of a gray hoodie and hot glued around the edges. Looks like Spidey's in trouble! 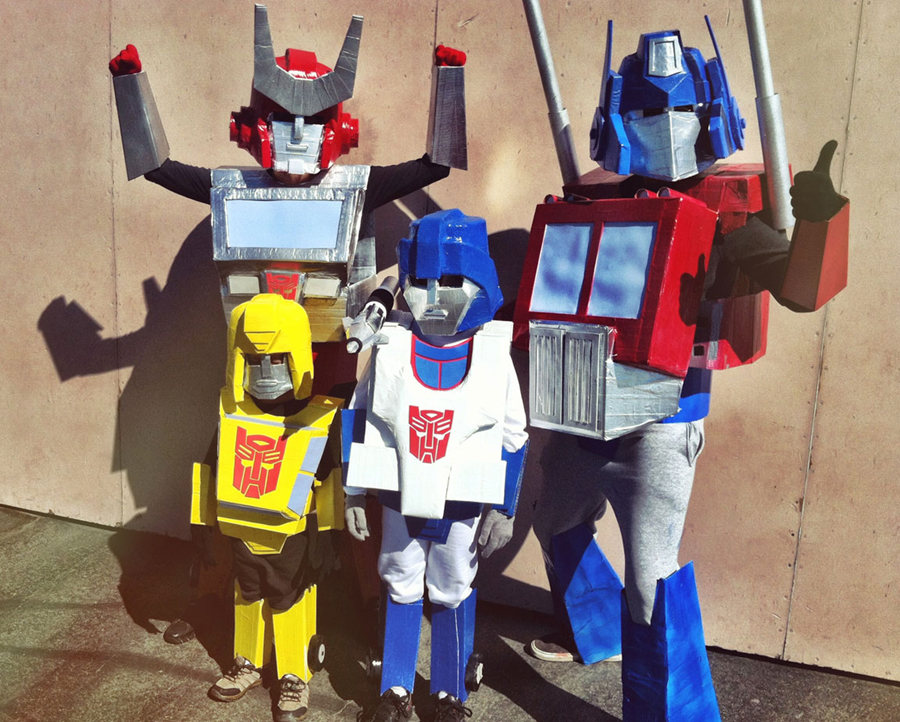 Halloween is a huge event at the Spiridellis house. Dad Evan is one half of the creative team behind JibJab and StoryBots, so this should come as no surprise. Every year they round up the family around June to decide on a theme, then building costumes becomes their summertime project. Recently their sons wanted to be Transformers after discovering the '80s cartoon on Netflix, so the entire family got transformed!

Get the look: The only details I was able to glean were that the costumes involved cardboard boxes and LOTS of duct tape. I’m thinking some spray paint, patience and elbow grease were also involved. 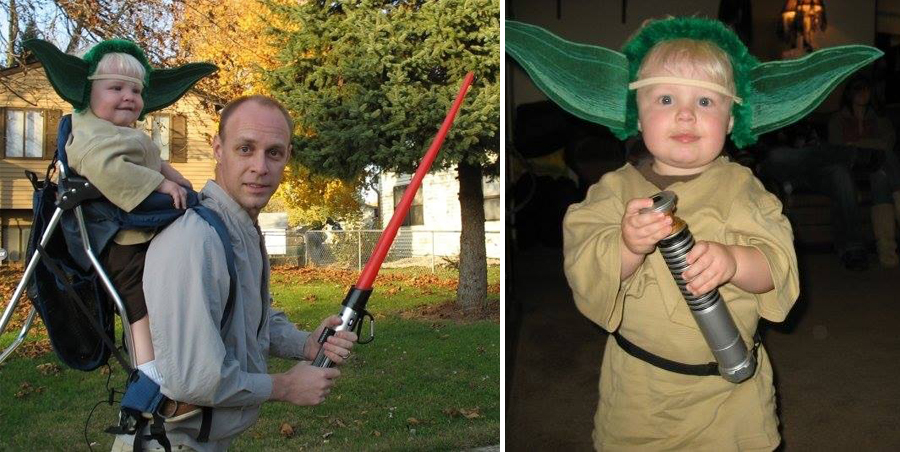 Luke Skywalker and Yoda from The Empire Strikes Back

As a new father, Nick spent a lot of time carrying his son in a baby backpack. And as a longtime Star Wars fan, inspiration came easy for a joint Halloween costume. Dad is dressed as Jedi-to-be Luke, with his young son as Jedi master/backseat driver Yoda, re-creating the iconic training scene in the Dagobah system. So adorable, Yoda is!

Get the look: Yoda's ears are cut out of a stiff felt, texture added with a paint marker, then hot glued to a headband that’s been wrapped in a fuzzy green pipe cleaner. Layer your young Yoda in a brown undershirt and oversized, tan T-shirt to complete the transformation. 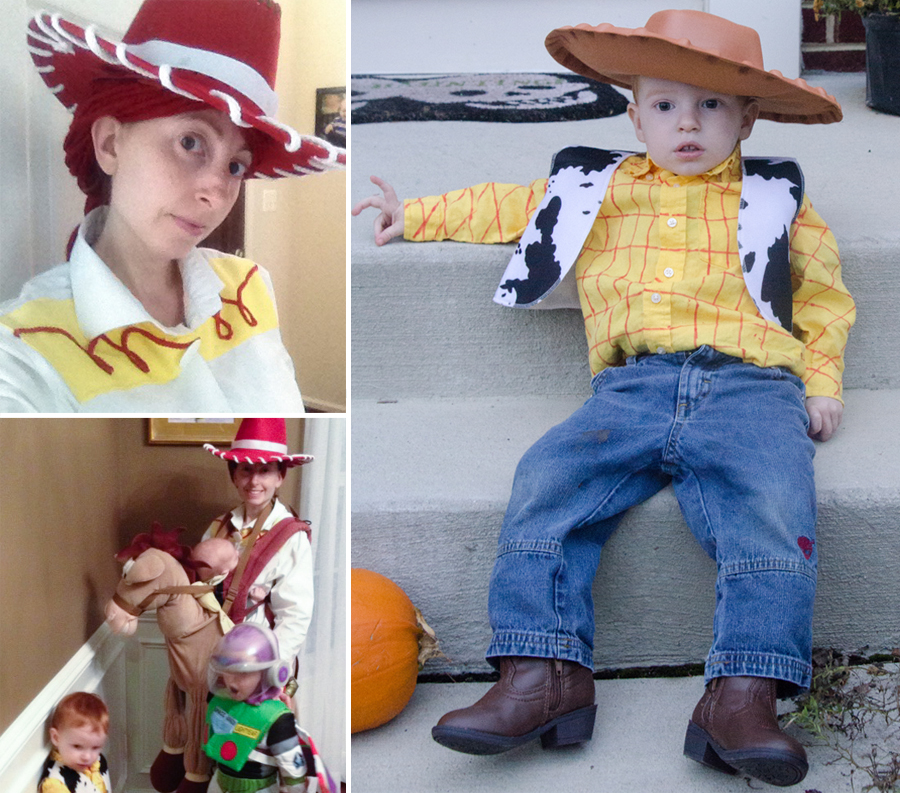 Mindi is a mother of three, inspired by her trio of sons to make costumes for the entire family. The oldest two boys had already decided on Buzz and Woody, and Mom wanted to make a costume that incorporated a way for her to carry her youngest. She cut apart a horse costume intended for a toddler, altering the straps so they'd tie onto her baby carrier. Way to go, Mom — giddy’ap!

Get the look: For Woody, Mindi used a red Sharpie and a ruler to add the pattern to the yellow shirt her son already owned. She added the white ribbon and yarn to a red hat she found at a thrift store to make Jessie's cowgirl hat, and created her red yarn wig from a tutorial she found on Pinterest. Read more here. 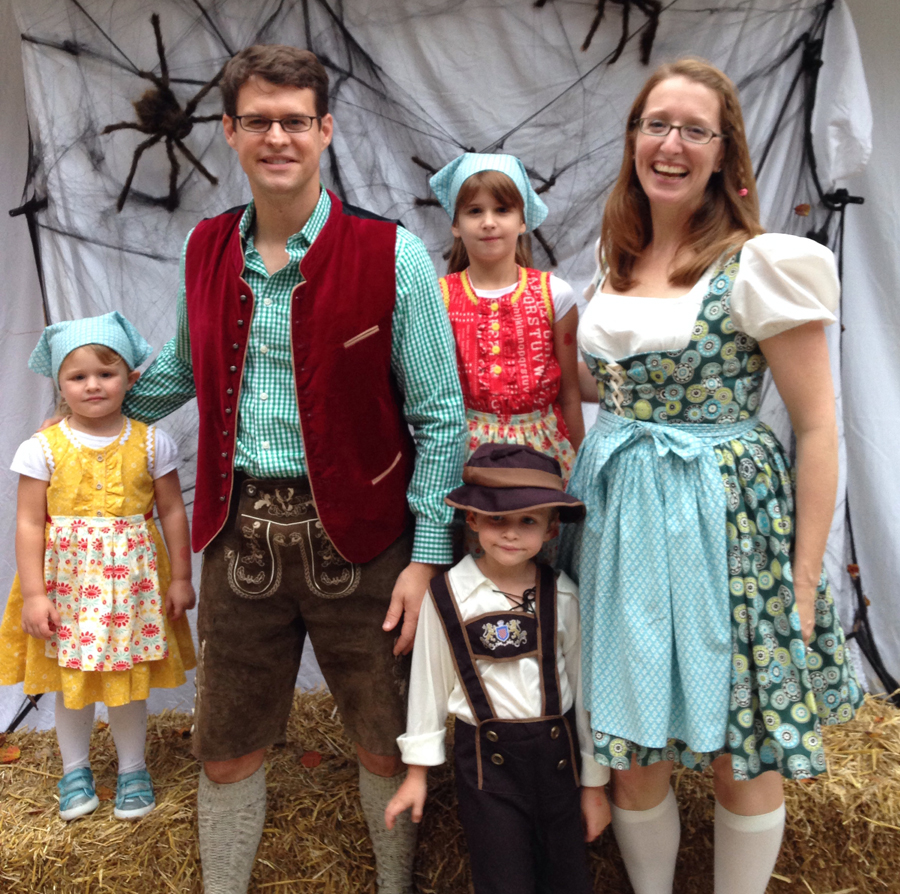 The Von Trapps from The Sound of Music

Father of four Michael had been to Oktoberfest in Munich just before Halloween, which he explains was part of his family's inspiration to dress as the Von Trapps that year. But their love of The Sound of Music started long before that, as evidenced by their youngest being named Liesl.

Get the look: Dad got his Lederhosen during his trip to Munich, but their son’s was ordered from Amazon. Mom Deborah writes a sewing blog, so she made all of the girls’ dirndls herself. Singing lessons optional. Get the dress patterns here and here. Read more here. 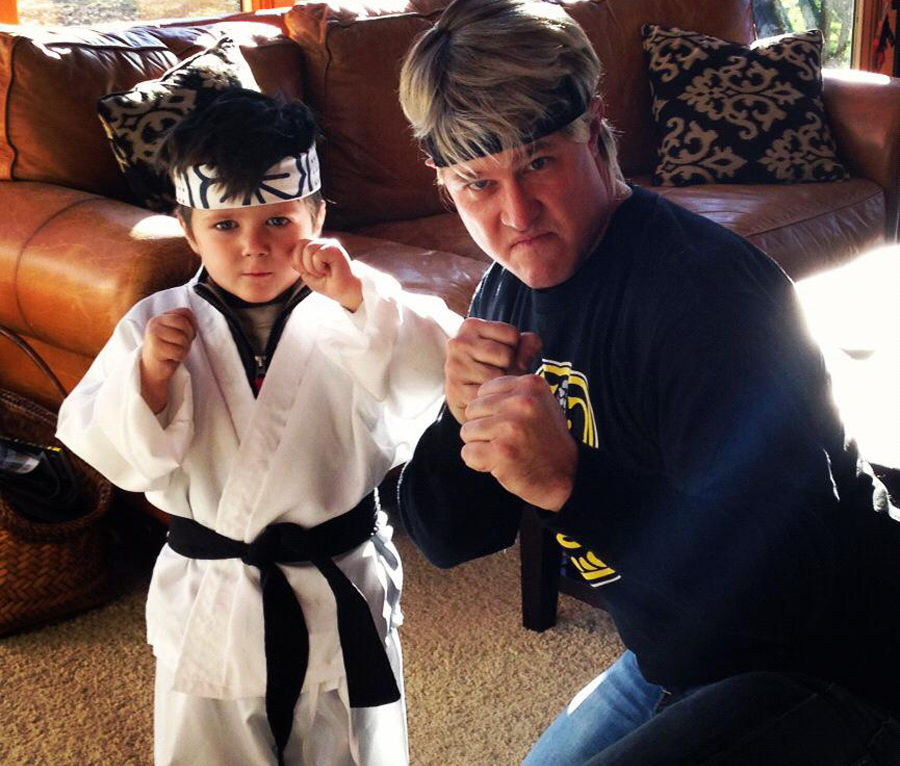 Daniel and Johnny from The Karate Kid

The costume idea came from three-year-old Jack, who had already seen The Karate Kid "about 30 times," according to his dad, Alan. Originally thinking he would be Mr. Miyagi, Dad instead settled for the film's protagonist, Johnny. Seeing such a strong resemblance, I'm not sure how that was ever NOT the first choice. Good job, Daddy-san!

Get the look: They spent about $40 on a gi (karate uniform), black T-shirt and a pair of bandanas. Wanting to go for the full effect, Dad dyed little Jack's brown hair black. To quote Alan, “Rinsing the dye out of his hair that night made our tub look like something out of The Shining, so it was a pretty successful Halloween from start to finish.” Read more here. 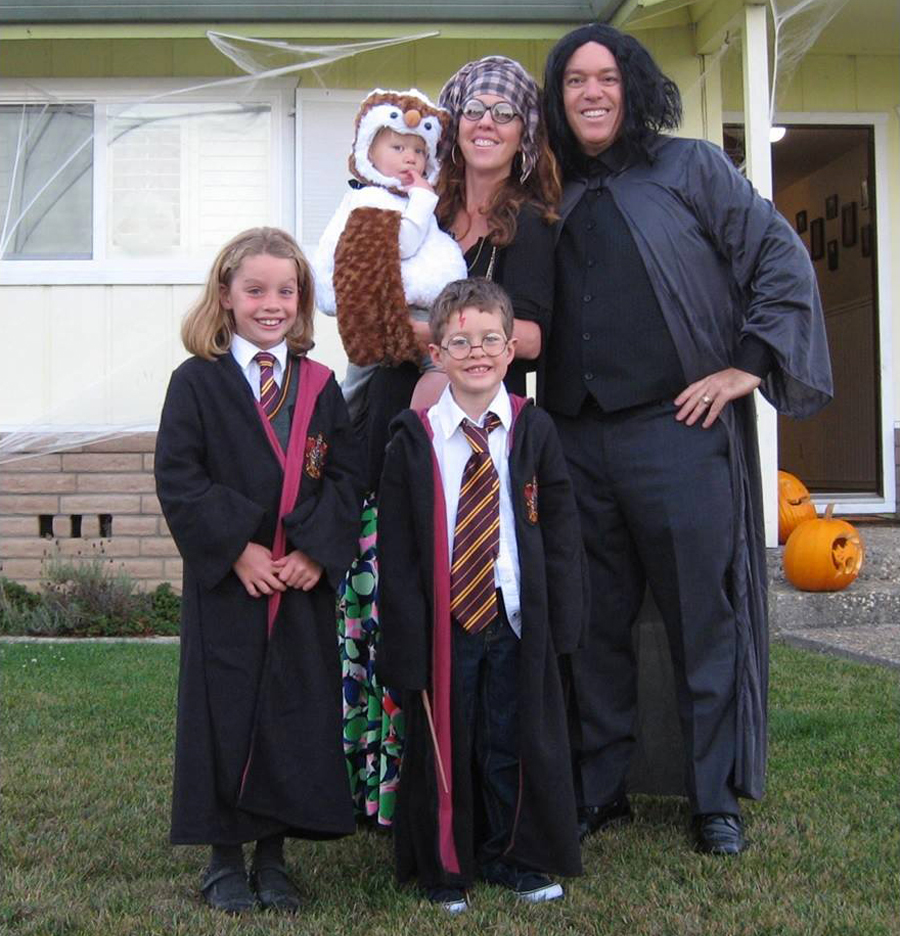 The Christensen's daughter had recently discovered the Harry Potter books and films, and for her that Halloween it was Hermione, or nothing. So the entire family rallied around her and filled in the cast with little brother as Harry, Dad as sinister Severus Snape, Mom as dingy divinations professor, Sybil Trelawney, and the youngest Christensen as Errol, the Weasley family’s clumsy owl.

Get the look: The kids' robes were officially licensed pieces, but everything else was pulled together from local costume shops, eBay, thrift stores and their own closets. They even had wands made by a blacksmith friend. But according to Dad Sam, the one vital element is attitude. "If you’re feelin’ it, you’re doin’ it." Snape never sounded so wise. Read more here.

Brent Almond is a writer, graphic designer, comic book geek and all-around pop-culture junkie. He lives in the burbs of Washington, D.C. with his husband, preschool-aged son and their fluffy, black-and-white dog. Brent chronicles his adventures and obsessions on his blog, Designer Daddy.