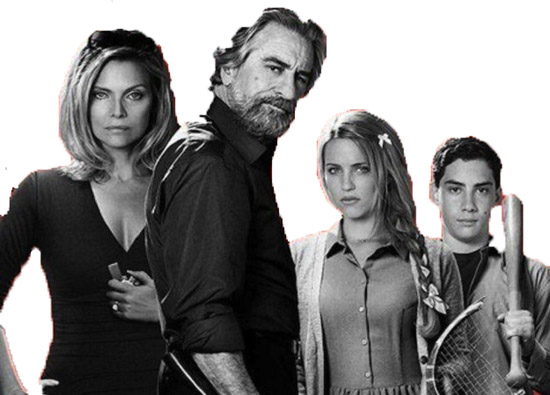 Synopsis: Former mobster-turned-witness Giovanni Manzoni (Robert De Niro) must relocate his family (Michelle Pfeiffer, others) to another secret location after he misbehaves. Will the family outrun the mob? Will they blend into their new surroundings? Will Giovanni finish writing his mobster memoirs? With the help of FBI agent Stansfield (Tommy Lee Jones), they just might.

Joe: No, but it’s a good movie to see with your parents.

Sarah: Apparently, if you’re over the age of 65, it’s a rousing good time. Our geriatric audience loved it.

Joe: Especially the old lady behind us. I appreciated her commentary throughout the film. Like when a character sees a typewriter, she said, “Put paper in it!” And when a car drifted offscreen, she asked, “Where is it going?” It was like a human version of that old Microsoft Helper Paper Clip.

Sarah: I was just thankful she was silent during the sex scenes.

This is billed as a dark comedy. How well does it maintain that balance?

Sarah: Usually a dark comedy contains dark themes throughout but the only thing dark here is the body count and the violence. The rest of it is warm and wholesome.

Sarah: The mom just wants to take care of her kids and feed the FBI neighbors delicious food. Even the 17-year-old daughter is a virgin!

Joe: And then the father tortures a plumber. It’s a weird tonal shift. Throughout the film, De Niro’s character fantasizes about murdering people, but that’s only funny if he refuses to actually do it. When we see him really kill people, it’s not funny; it’s strange. What are the rules here?

What drove you nuts?

Joe: Nothing drove me nuts, but the patchwork of abandoned setups and unrelated payoffs was annoying.

Sarah: Wouldn’t witness relocation try to keep them away from a country right next to Italy?

Joe: For no reason the daughter swiftly tumbles into Fatal Attraction and then Romeo and Juliet territory. 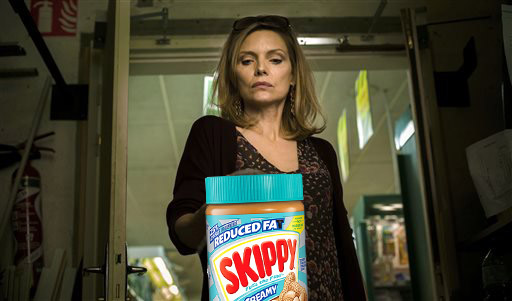 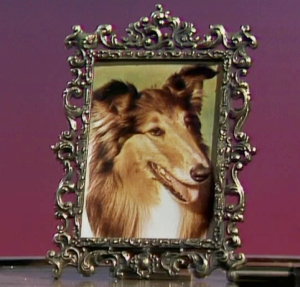 Joe: The chain of events that leads to the mob’s discovery of the family inspires incredulity, if not madness. It would have been more believable if Lassie showed up and started barking at the mob until they figured it out.

Joe: I was a victim of my own expectations. I thought this would play out differently. I expected the townspeople to rally around the family and protect them. In return, the Manzonis would use their mob tactics to help benefit the community. When that didn’t happen, I was disappointed, but that’s on me, not the movie. However, the crazy tonal shifts and bad dialogue are completely the film’s fault.

Sarah: It’s not a complete movie. It would have helped to have the family’s backstory. Giovanni literally spends the entire movie writing his detail-filled memoirs, and the movie tells us none of it. Wha wha what?

Joe: Yeah, this would make a better TV pilot or miniseries than a movie.

Sarah: Also, the mobsters are a laughable cross the between the weasels from Who Framed Roger Rabbit? and the Fratelli brothers from The Goonies.

Joe: Right. There’s a scene where they all get off a train in France and they look like they’re going to a Halloween party dressed as mobsters.

Sarah: It’s a breezy film with a high body count. It’s the perfect airplane movie. If you’re not on a plane, skip it.