Will you be going back to see The Twilight Saga: New Moon in theaters this weekend? Apparently yes, according to a new Fandango poll where 52% of the fans surveyed said they're going to see the film more than once in theaters. If you do plan to head out for another go-round with Bella and Edward, make sure to pay attention to who's sitting around you because apparently one 17-year-old Twilight fan was actually bitten by a man sitting behind her at a recent New Moon screening in Norton Shores, Michigan. 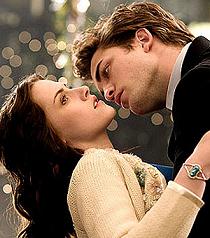 The girl was just minding her own business, slowly drifting off into Pattinson Fantasy Land when some 45-year-old dude began making sexual comments to her and her friend. Unfortunately it didn't end there because when the film was over, the man reached over and bit the girl on the neck. Thankfully the perverted bite didn't break the skin, but the man then fled the scene and hasn't been seen since.
What's the weirdest thing you've seen while attending a screening of The Twilight Saga: New Moon? Surely no one was biting necks at your local theater…or were they?
Like it? Share it:

Why Robert Pattinson is Scared of His Fans

Why Robert Pattinson is Scared of His Fans