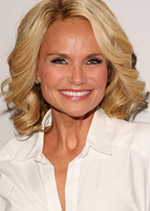 Four months after a pilot tease, Fox unleashed a Gleeful hour of song, dance and comedy that lived up to the hype, for most of us, anyway. On our You Again set visit last month (details to come on that soon), we met up with Kristin Chenoweth (Glinda in Broadway's Wicked), who's soon to guest star in Glee's fourth episode. She raved about it: "Oh my god, it's like crack. The show is fantastic."

Chenoweth will appear as April Rhodes, an alcoholic, and bad company for the glee club members. "She was the deal in high school, and they come to use her again. They find out that their rival team is using older people," Chenoweth says. "They seek her out, and she looks young enough to still pass. I get to sing and dance in that, and I get to play a very different part."

Although it's a guest appearance, Chenoweth says Ryan Murphy, the show's creator, left it open so she could come back. "These kids—I mean, I just love being around that kind of talent. It's just so inspiring to me. I didn't get to work with Jane Lynch, which is the biggest bummer, 'cause she's so great, but hopefully, I'll get to come back in some capacity."

Fingers crossed, the fourth episode will be as fun to watch as it was for her to film.