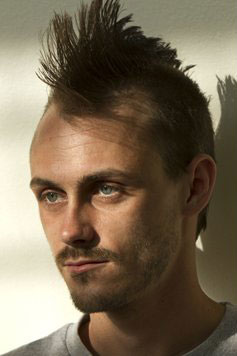 Will Cameron Stewart become a name as ubiquitous as his sister's? Mom Jules Stewart is hoping so, as her indie drama K-11 now includes older brother Cameron as the transgendered inmate at the center of the story. Kristen Stewart was rumored to be on board for mom's directorial debut, which also stars Goran Visnjic, D.B. Sweeney, and Portia Doubleday -- but the Twilight star is now out and Cameron is in for the part of Sledgehammer.

Visnjic will play the part of a young record producer who wakes after a (drug? alcohol?) binge to find himself in " … a special unit of L.A. County’s Men’s Central Jail that's dedicated to vulnerable prisoners, a place ruled by a viper transsexual." (Um, will someone please educate me on what a viper transsexual is?) Shooting is currently underway at an abandoned correctional facility for women in L.A. County.

While prison rape and violence may not have suited the image that K-stew is trying to maintain for her upcoming debut in Snow White and the Huntsman, momma Stewart's dark little movie could be the thing that puts the right kind of spotlight on big brother. Now we wait to see if the family resemblance is just about looks or acting ability too (which may or may not be a good thing, depending upon which camp you're in). Is K-11 pure nepotism or worth a watch?