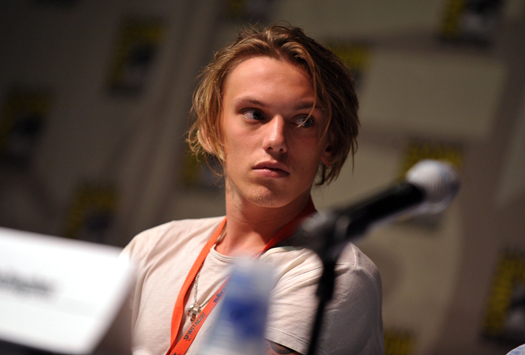 If The Mortal Instruments: City of Bones isn’t on your radar, after Saturday's Hall H panel, it should be. Screen Gems unveiled an impressively suspenseful and rather brutal sequence from the film that culminates in an ideal payoff – Jamie Campbell Bower’s Jace Wayland nonchalantly stepping in to save the day.

The film focuses on Lily Collins’ Clary Fray. She’s your average girl living in New York City until, while out at a club, she becomes the only witness to a murder. Clary’s existence is rattled further when her mother is attacked and kidnapped. Complicating matters further, the only chance Clary has of finding and saving her is by teaming up with that very murderer from the club: Campbell's character Jace, a member of the Shadowhunters -- a half-angel race secretly protecting humans from demons.

At This Year’s Comic-Con

Just ahead of The Mortal Instruments’ run in Hall H, Bower sat down to talk about his string of good luck with young adult book-to-film adaptations, his issue with “smelly acting,” and loads more. He also dropped a hint about a certain Easter egg that’s worth keeping an eye out for when the film hits theaters on August 21:

“There’s an Easter egg, but I don’t know if I want to ruin it. Listen for somebody’s name who’s involved in the film… but is not a character. That’s all I can say.”

While you’re waiting for the chance to track down that big reveal, hear more about Bower’s darker and more brooding take on the character in our video interview below.

And if that's still not enough for you, we also caught up with him on the red carpet at Comic-Con. Here's what he told us.

Next Article by Kristin Barclay

Which Summer 2013 Movies Will Your Kids Still Love As Adults?

Which Summer 2013 Movies Will Your Kids Still Love As Adults?