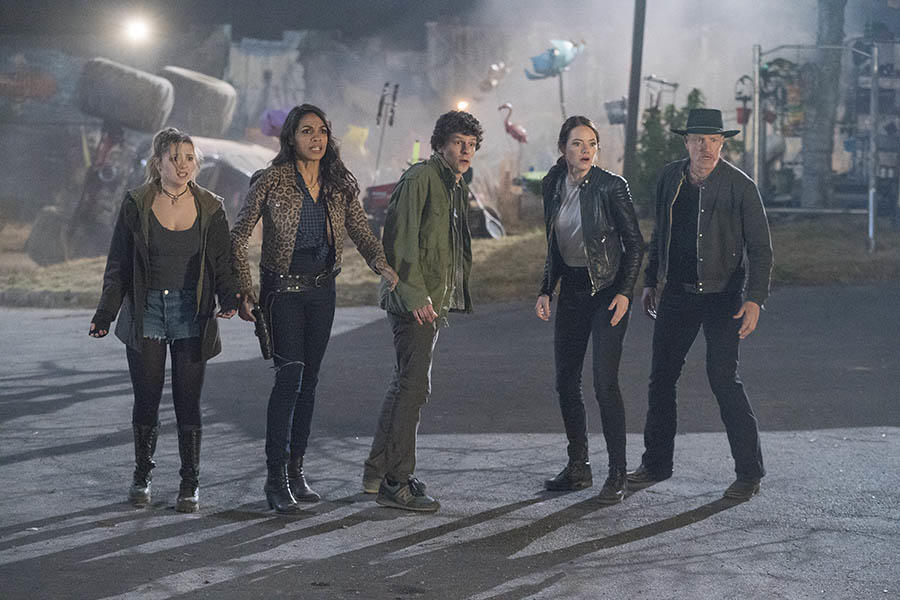 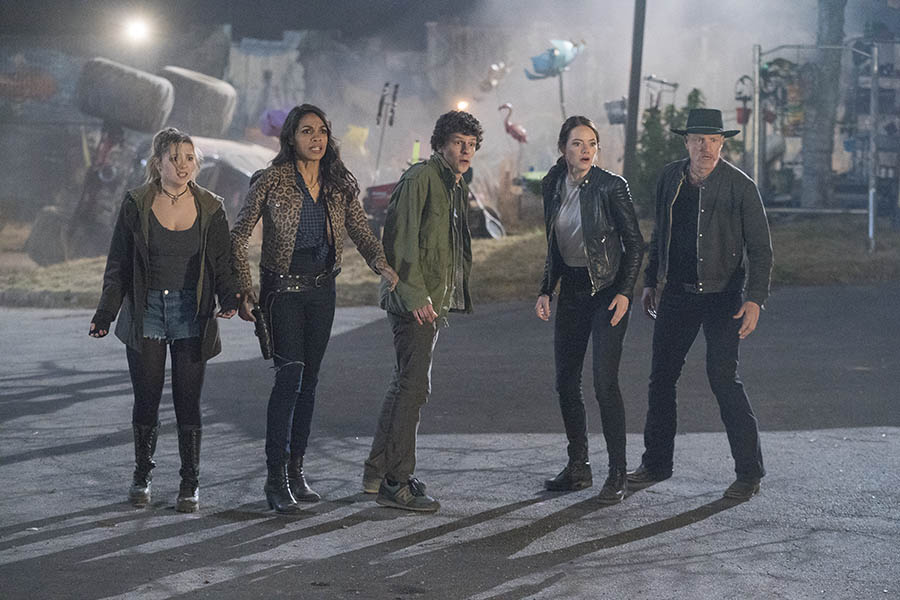 Zombieland was a surprise $100 million hit in 2009. Ten years ago, the zombie comedy put Woody Harrelson back in the saddle of leading roles, cemented Emma Stone and Jesse Eisenberg as stars, and gave Abigail Breslin another massive hit before she even hit age 13. Since Zombieland’s release, the entire cast has become Oscar nominees, and Stone was the first to win (for La La Land). The writers, Rhett Reese and Paul Wernick, went on to write the Deadpool films and the director, Ruben Fleischer, made Venom. In the past ten years, the horror comedy has lost most of the box office ground to straight-up horror. So it’s time for the horror-comedy “to nut up or shut up.” The scrappy gang of misfits, who all go by their hometown as their name (so as to not form long attachments), are facing off against a new batch of zombies and continued relationship difficulties during the widespread zombie apocalypse, with hopes that laughs and scares will be the ticket for Halloween audiences.

Speaking of tickets, Zombieland: Double Tap tickets are on sale now! To celebrate, we spoke to Fleischer about new zombies, new characters, and the rare ability to bring back the whole gang—writers included—for a film that marked everyone’s breakout ten years prior.

Fandango: It's been 10 years since the first Zombieland film. Does this take place exactly 10 years later? Have the zombies adapted at all in any of that time?

Ruben Fleischer: We don't ever definitively define how long it's been, but the clear indicator of time passing is Abigail Breslin, who when we last saw her was a mere 12 years old and she's a fully grown woman at this point. So that is kind of the biggest demarcator of time — that she's not the little girl that we remember from the first movie.

Then as far as the zombies, yeah, I think our heroes are a little complacent because the zombies don't present much of a challenge anymore. They've started to categorize them into different groups. There's ones that they call Homers, who are kind of the dumber zombies. There are the Ninjas who are a little bit more crafty and they might sneak up on you. And then there's the Hawkings, who are smarter zombies. Then there's a new kind of zombie that they haven't met before called a T-800, a name for the infamous Terminator. These T-800s are much more dangerous, threatening form of zombie. For the first time, I think our heroes feel like they're in true jeopardy because of this newly evolved form of zombie.

Fandango: I like all the different categories. Those names all sound like they come from Columbus (Eisenberg). Is Double Tap still shown from his point of view?

Fleischer: Yeah, he's the narrator and he does have some new rules which we'll find out along the way. He's crafted some new rules to help deal with their continued reality. There are quite a few, really, but I guess the best way to find out is to come see the film.

Fandango: Both comedy and horror has changed a lot in the last 10 years. Are you trying to keep the same tone that made the first one such a beloved movie, or are you ramping up the gross factor to go alongside how popular horror has become?

Fleischer: We really just tried to harness as much as possible the feeling of the original. Which is ultimately about the chemistry of these four people together and how they relate and how funny they all naturally are. So I think we definitely tried to just channel the first movie as much as possible in terms of the really fun, super funny characters.

What's cool is we introduce some new characters in this film. Among them is a girl named Madison, a younger Millennial. Because time stopped in 2009, she's a little bit stuck in that sort of early 2000s — think Paris Hilton, Lindsay Lohan — phase, in that she wears Juicy Couture and Von Dutch hats. But she's extraordinarily funny and a great new energy to have among the groups. She just is really, really, really funny — Zoey Deutch, who plays Madison.

Fandango: Yeah, I'm a big fan of Zoey, so I'm really looking forward to see what she does in this. What could you tell us about Rosario Dawson's character and how she fits in?

Fleischer: Well, among other things in this movie, Tallahassee (Harrelson) is looking for a little bit of love, I think. So when he comes across Rosario's character who's called Nevada, she's kind of a true equal to him. She's a tough badass zombie killer in her own right. They both share a love for Elvis Presley, and she's also a lone wolf. She doesn't want to be tied down. So they have a real kind of instant attraction. Also, there's a bit of a standoff between them as well. She was so great to work with. She just fits right into the whole group. She feels so good in the movie.

Fandango: You guys kind of play with this in the trailer, but since Zombieland was released, the whole cast has gone on to do some pretty amazing stuff — lots of Oscar nominations across the broad. Was this something that you and the writers were wanting to get back to do for a while? Or did 10 years just kind of seem perfect time to revisit?

Fleischer: Well, everybody was really excited to reunite and to make the movie. The challenge was just getting the script right because we all felt like the first one, it's so beloved, we didn't want to do anything that was going to kind of tarnish the legacy of the original. So we held ourselves to a very high standard to try and make sure that we made a movie that was at least as good as the first one.

In order to do that, we all had to have a lot of confidence in the script. It just took awhile to get that story right. But once we did, then yeah, there was the obvious challenges of getting four really busy people's schedules to align. But it all came together in a great way.

Fandango: What was it like getting everyone back together? Did everyone kind of seem to fall back into the chemistry that they had prior, or was there some catching up needed?

Fleischer: It was really incredible how it just felt like not a day had passed. It's interesting — it's like an old friend that you haven't seen for a while. You don't really need to even catch up. You just have that bond. That's how it felt.

The other thing is that Jesse and Woody have done a couple movies together with the Now You See Me films. And Woody and Emma are super close friends. They hang out a ton. So they've all maintained relationships with each other.

Then, I've since worked with Jesse in 30 Minutes or Less, Emma was in Gangster Squad, and Woody was in Venom. So I've worked with the three of them a lot since the first movie. So, yeah, it felt great in that way, we’ve all been orbiting each other since, in various capacities.

Fandango: One of the most popular things about the original film is the extended Bill Murray cameo, which I know reading about it, sounds like there were lots of cameo offers out to celebrities, but kind of had that one big one, which is a great moment. I assume that there are some cameos in this. Did you guys go for quantity of cameos of try to recreate a large cameo for someone again?

Fleischer: Well, we knew we couldn't beat the Bill Murray cameo, so it was really challenging to try and figure out what to do because that was such a beloved part of the original movie. But I hope that audiences will like the surprise we have for them in this film.

Fandango: Columbus has a line in 2009 about how he's more afraid of clowns than zombies, which since then there's been... I mean, we're in a clown terror renaissance right now. Will that be played up at all in this one?

Fleischer: [laughs] No. Truth be told, we tried to not retread a lot of the same ground as the first one. We really tried to make it feel fresh and original. So we didn't kind of go after a lot of the same things from the first. I mean, there are some things that are consistent like the Zombie Kills of the Year, for example. But we wanted to not just go after Twinkies and clowns again; we tried to create new scenarios. But clowns are very popular right now.

Fandango: You mentioned you cast Woody as Carnage in Venom, which had a small part at the end there, setting up a sequel. What made you want to cast him for that and what are you looking forward to seeing him do in a larger capacity for Venom 2?

Fleischer: I mean, I think Woody's just one of the all-time great actors, and I'll watch him do anything. In this, he completely steals so many moments... he's so funny in this film. Please don't say that he steals it, that's not fair to the other actors. But he's so, so funny. I don't think he's been this funny in a movie in a really long time. He just completely shines. So I love watching him in anything and I'm excited to see what he does in the next Venom.

When I watched the movie, the thing that I delight in is just seeing the four of them back together again. There's just such an amazing chemistry that's so rare to find. It's so natural, and they're so funny that the joy of the movie for me is honestly just getting to hang out with those characters again who we all have come to love. I think you'll really love it. I dare say I think it's funnier than the original. It's really, really funny.

A lot of the really funny stuff is improvised. Jesse's one of the wittiest people that you can hope to meet. So when you have people like he, Emma and Thomas Middleditch and Woody and all these guys just improvising, we end up with some really incredible moments.

I mean, the script was terrific to begin with, but there's so much additional jokes that were just created in the moment in the scenes. Even some of my favorite jokes are ones that the cast came up with on the spot, which is pretty cool.

Zombieland: Double Tap will be released October 18. Tickets are on sale now. Check out the character posters below: 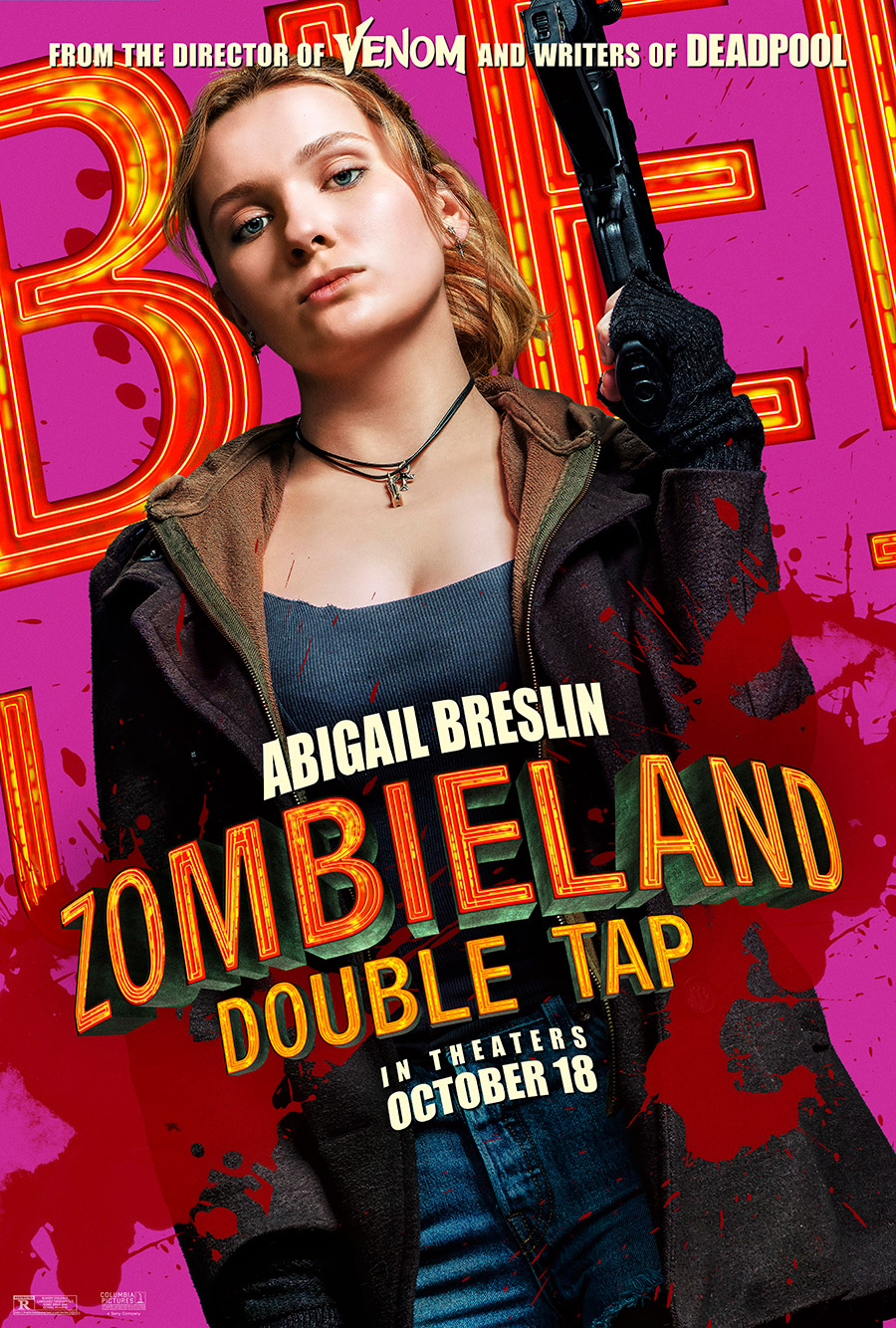 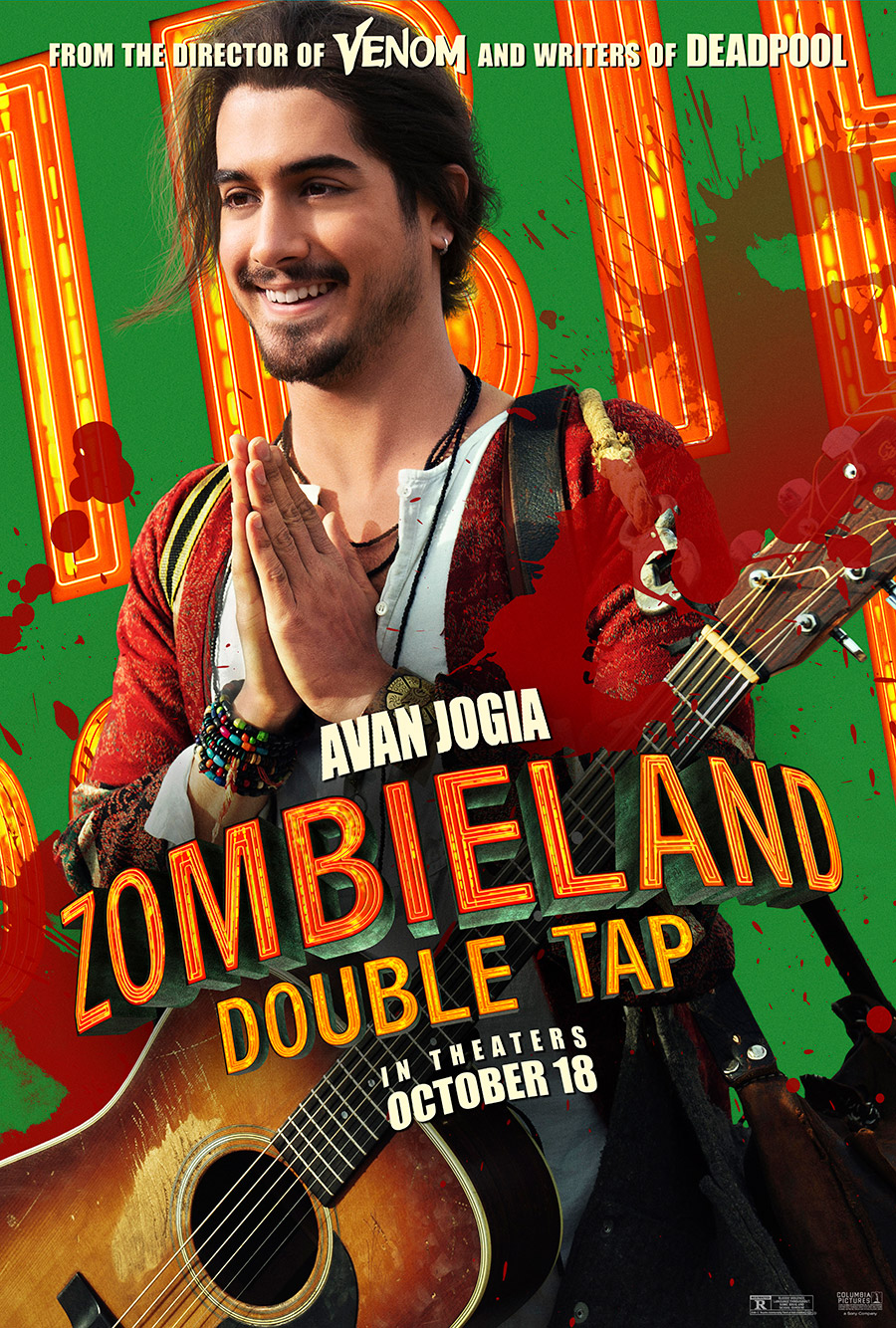 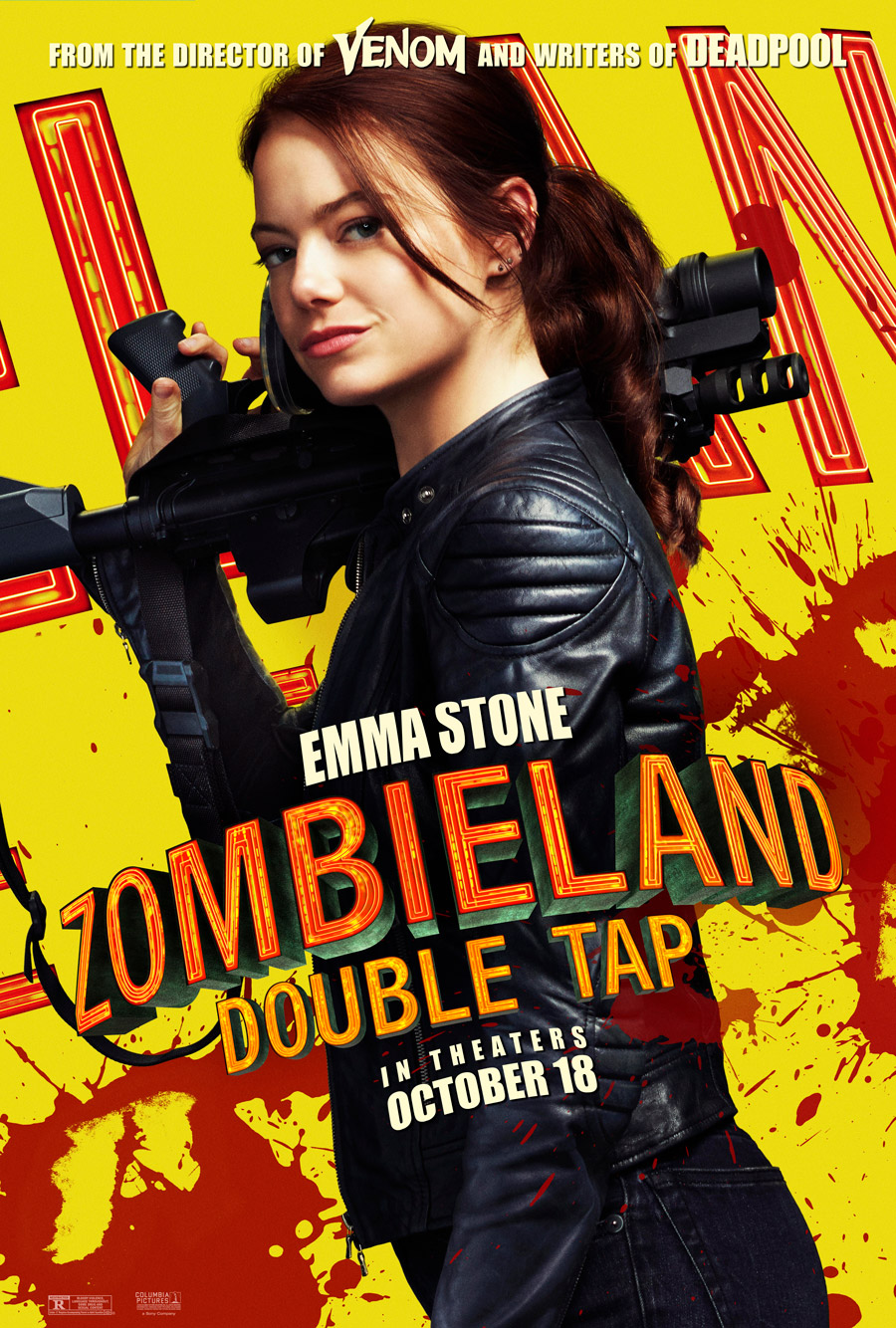 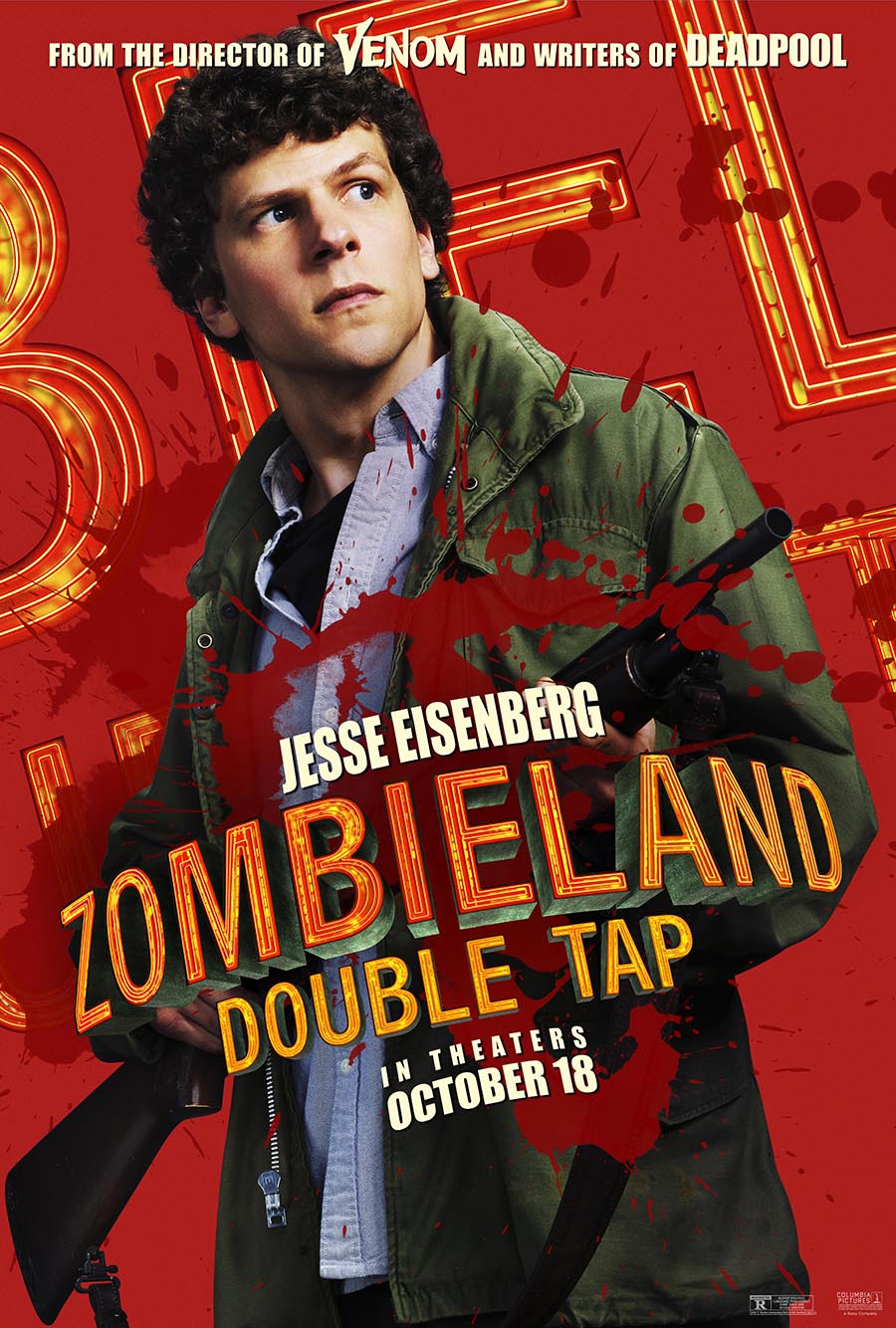 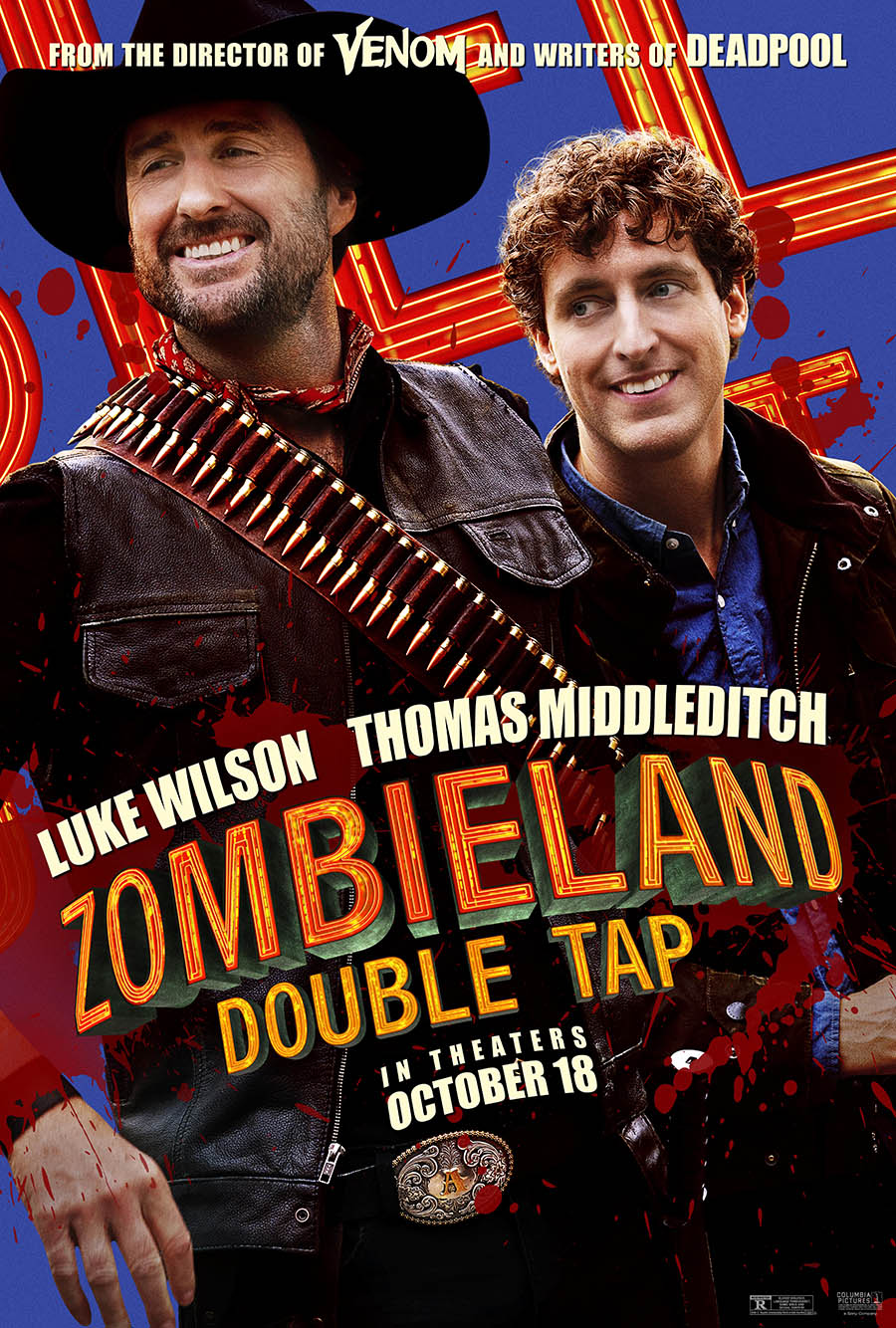 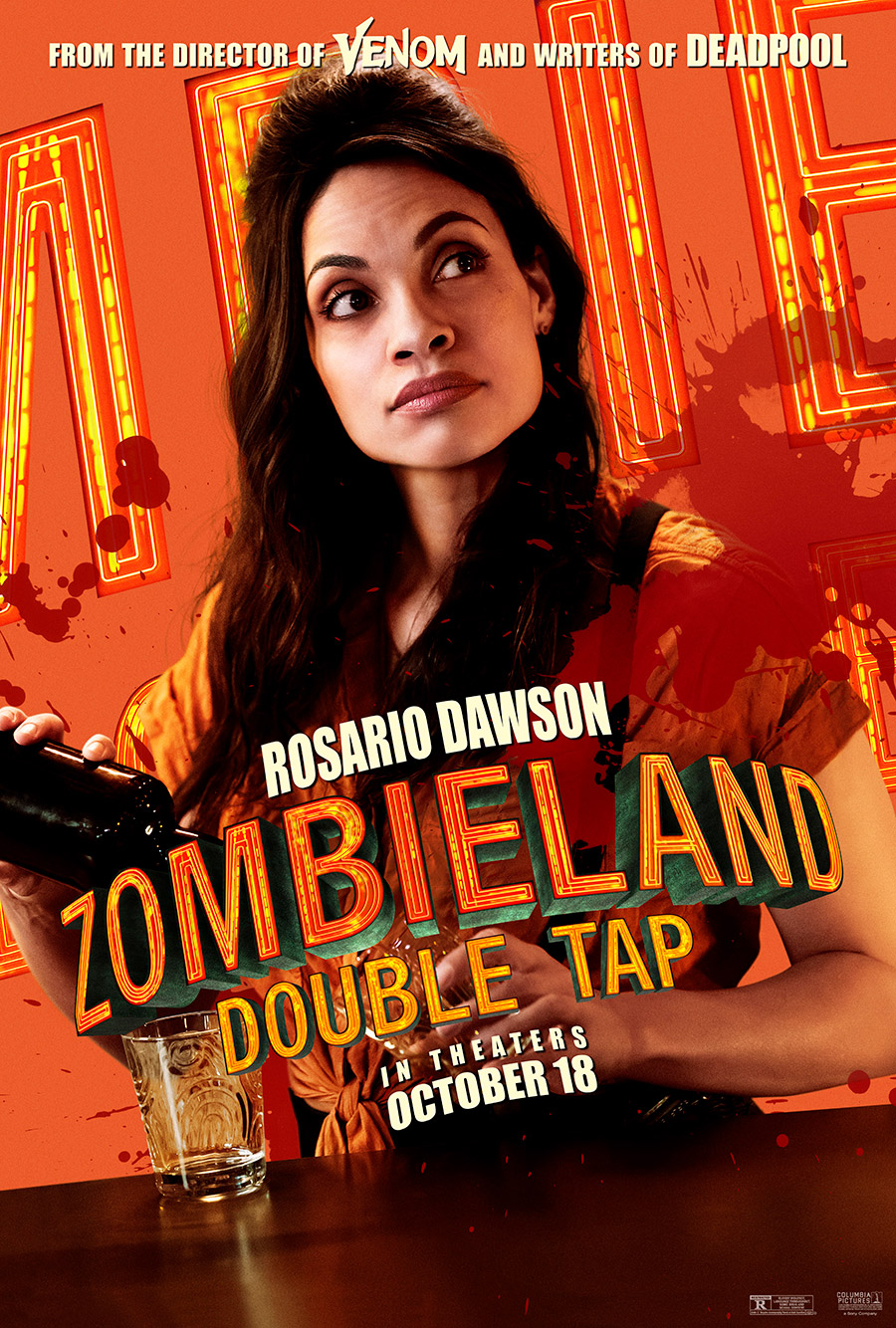 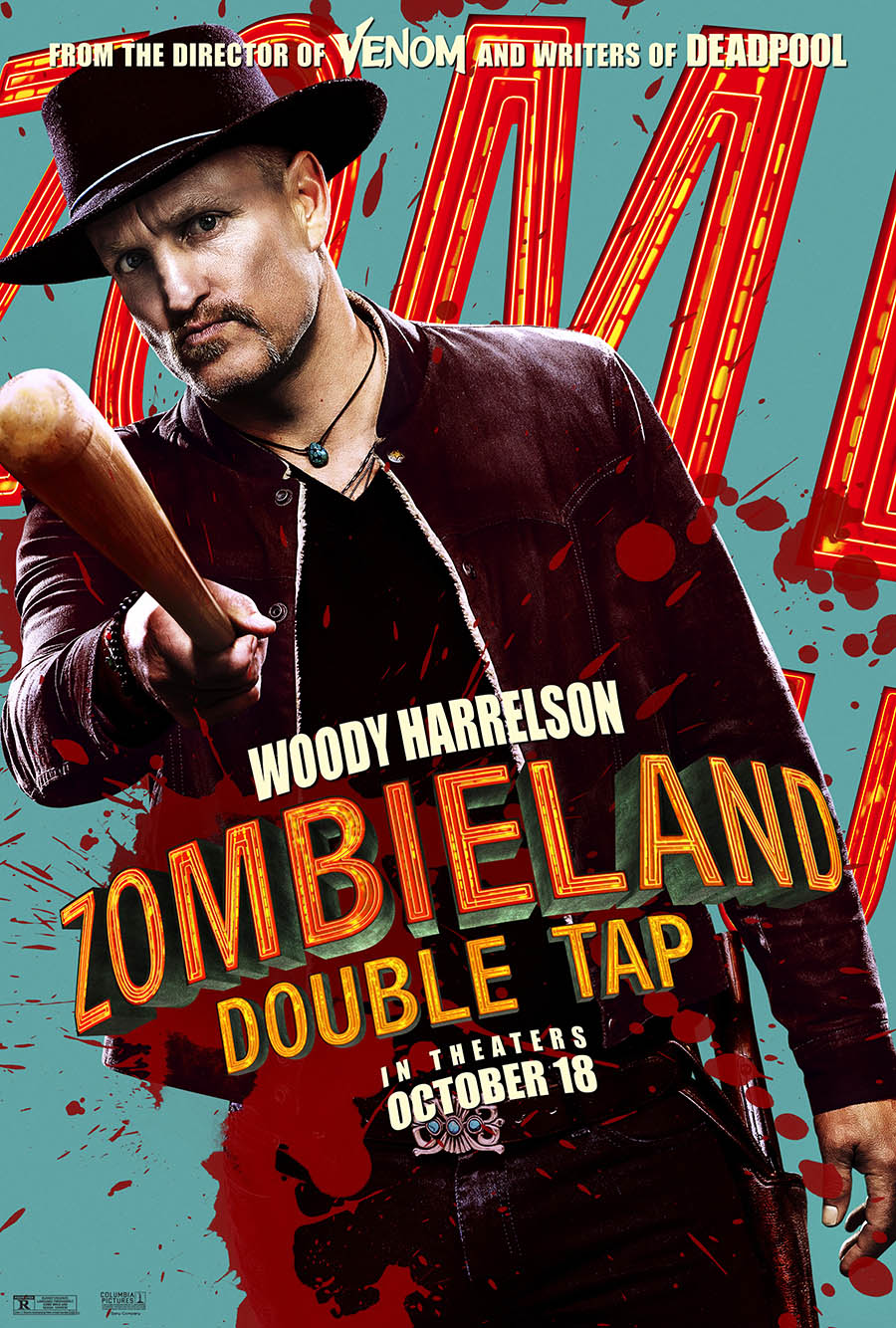 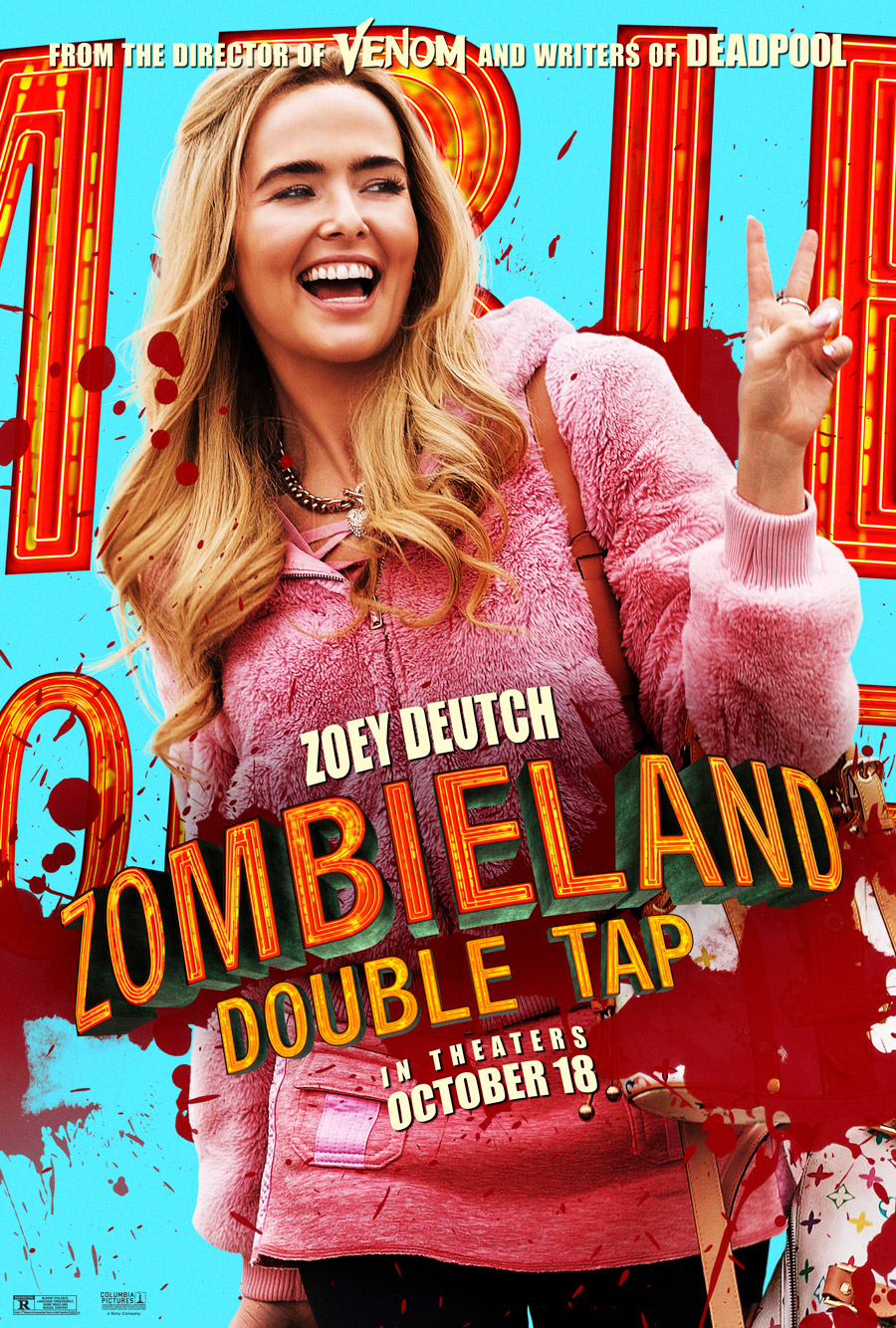