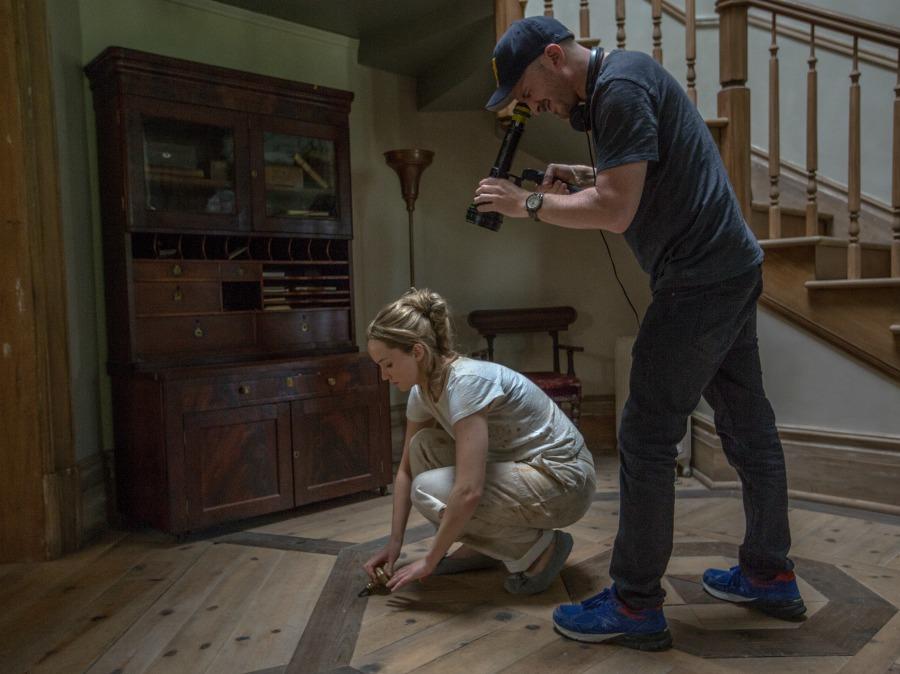 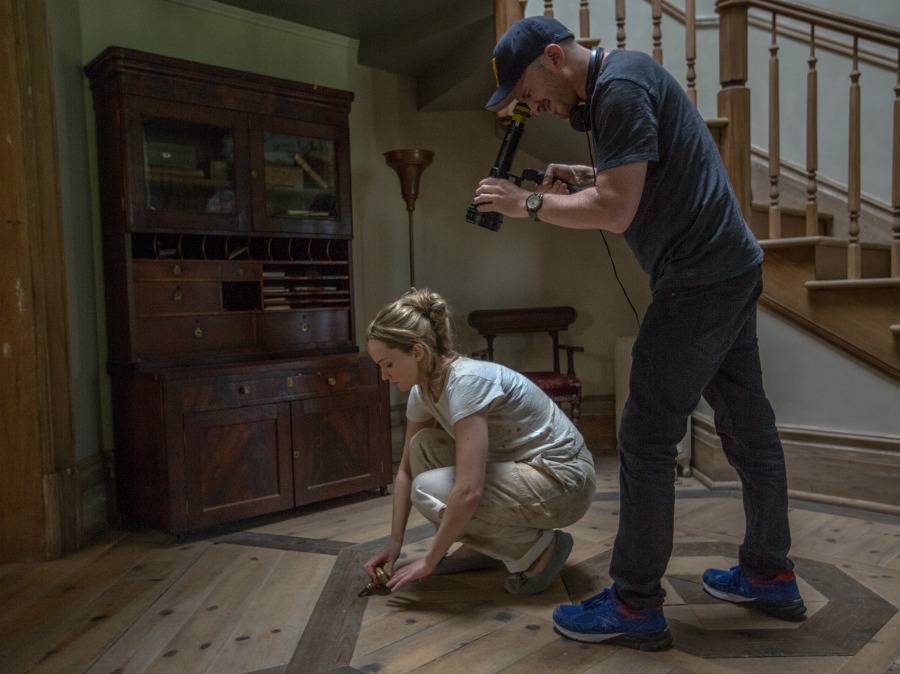 If there's one certain conclusion to be made about Darren Aronofsky's new film mother! (in theaters this weekend; snag your tickets here), it's that it is unlike anything you will watch in a theater this year. On the surface, mother! is a psychological horror about a couple (Jennifer Lawrence and Javier Bardem) who move into a house in search of peace, quiet and inspiration, and before long they are visited by strangers who forever disrupt their universe.

Pretty much everything else in the film is up for interpretation, as Aronofsky brilliantly weaves in and out of growing chaos, delivering an experience that's angry, paranoid, beautiful, heartbreaking and wildly thought-provoking. Needless to say, there is no possible way you will walk out of this movie and not want to have multiple conversations about what you just watched.

So what did you just watch, or, perhaps, are about to watch? Fandango sat down with Aronofsky to pick his brain about what inspired his latest work, the visceral reaction he received from his cast and what he thinks of those calling it "the most hated movie of 2017."

Fandango: This is an ambitious movie that might not be for everyone. That being the case, who would you recommend this movie to?

I think the thing to know is that we are going to be the tallest, scariest, rollercoaster ride in the park. Maybe not only that, maybe we also built a fun house on top of a rollercoaster ride, so you're getting both at the same time. It's for anyone who likes to ride a rollercoaster with their hands up. That's the experience we were trying to give people in the cinema.

Fandango: For a film so rich and dense with ideas and symbolism, I'm curious to know what first inspired you to work on it. Was it something you watched or you ate or you read that first gave you the inclination of "this is a story I want to tell"?

Aronofsky: I just thought, after finishing Noah, I was itching to get back to the horror genre, and I did in Black Swan, and sort of in Requiem for a Dream. I always thought the home invasion genre was a really interesting one, because everyone can relate to having a house guest who just won't leave. I just thought it was a great starting place to start a nightmare.

Then, I had this larger idea of an allegory making it about the planet as our home, and the experience first hand from the mother of us all. So, when those two ideas clicked together, it just all started to make sense. 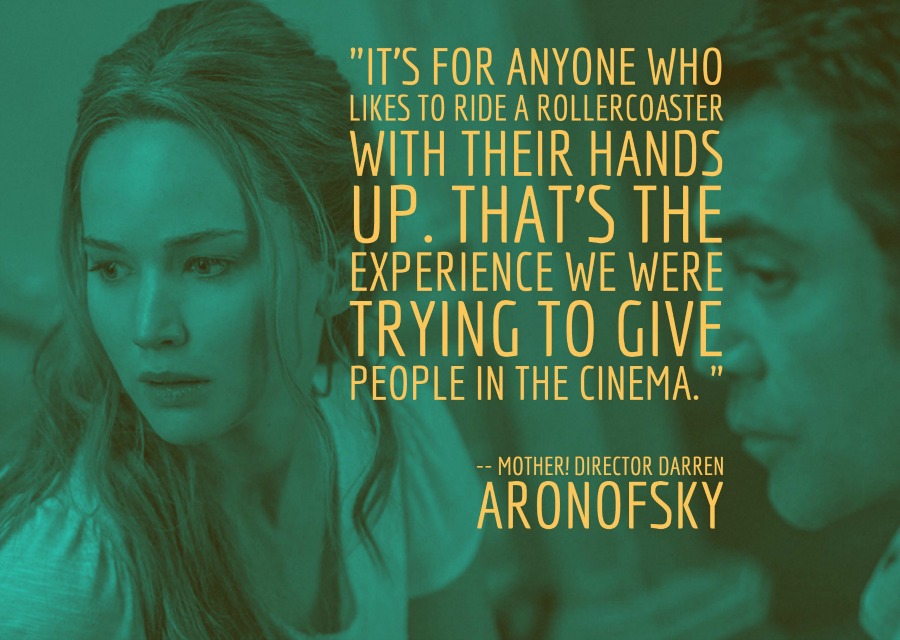 Fandango: You’re a lover of intricate puzzles, so much so that you own a desk full of puzzles you need to solve in order to access other elements of said desk. Does your love of puzzles inform your films? Is mother! one big puzzle in some sense, to piece apart and figure out?

Aronofsky: mother! is a puzzle in a similar way The Fountain was a puzzle. They're meant to have lots of interpretation. Then, they're meant to have lots of different layers that different people can react to in different ways. I'm always trying to provoke conversation, because I think that's the fun part of going to movies. Not just having a great experience, which is good for certain moments in life, but it's also fun to have movies that you're debating about, and thinking about, and talking about for days to come.

Fandango: Is there a specific conversation you'd like people to have when they walk out into the theater lobby after seeing the film?

Aronofsky: I totally had an intention when I made the film, and I'd been out there talking about it a bunch. It is really ... it's great that people see different things in it. There have been things that people have seen that were not in the immediate initial intention, and really just came out of different ... during the execution, things just changed.

Fandango: You joked to the audience at the premiere last night that they were really going to hate you after watching the film…

Aronofsky: [laughs] I did.

Fandango: One outlet called it, "The most hated film of 2017." Another said, "It was a beautiful disaster." Are these statements that bum you out? Or, does it turn you on knowing that the film is making an impact regardless of whether that impact is positive or negative – people are talking about it?

Aronofsky: Look, anytime you throw a punch at the audience, there are going to be people who appreciate it and love it and want more. There's going to be other people that are going to try to hit back. What bums me the most is that people who are reacting negatively are not responding at all to the craftsmanship and to the incredible performances and dedication of my actors, because they're undeniably great.

It's funny, those are the same people who also write about how there's nothing ever new going on in film. Suddenly, you do something really new and some people don't dig it.

Look, we knew what we were doing. We knew that we were going to get strong reactions. With all that, there's also people who are writing really beautiful things about the film that are very inspired and mean a lot. I don't really follow any of that. I just get the vibe. I knew, when we began this project, it was going to be an intense ride for people. 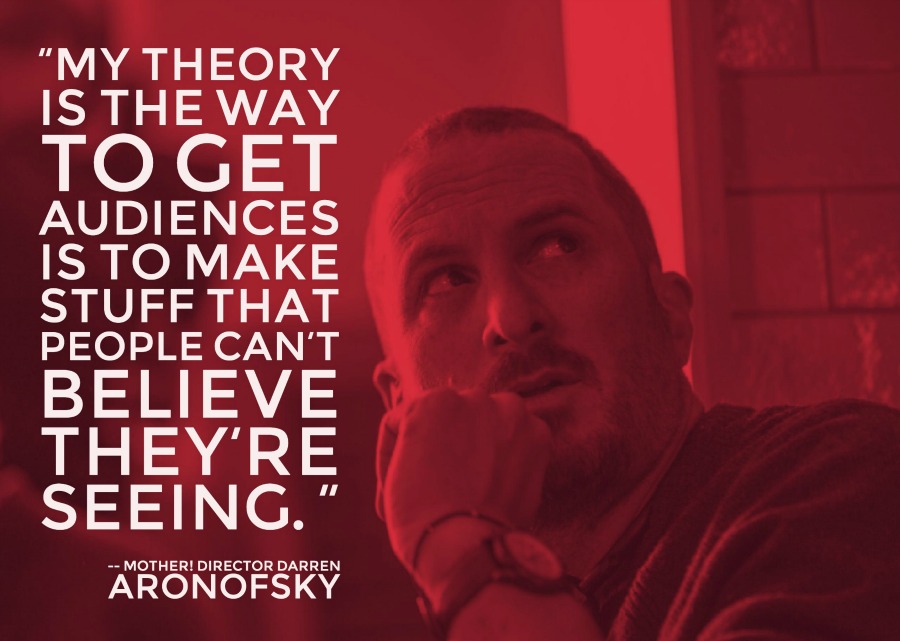 Fandango: We’re living in such a franchise-driven age, so it seems risky for a big studio to take a project like this on. Was it hard to convince them?

Aronofsky: When it started, we had a competitive situation. We had two studios that really, really wanted to make it. That's a great place to have leverage from. I think they understand that audiences want to see something different.

We're all competing, now in cinema, with all these other screens. Not just the TV screen. Even when people are watching movies and watching TV, they're sitting there on their computers or on their devices, just barely watching out of the corner of two eyes. My theory is the way to get audiences is to make new stuff, and make stuff that people can't believe they're seeing. That's what inspired me to really, really push the envelope.

Fandango: Do you feel like we're approaching an era of more creative risk taking? That this abundance of content is forcing creators to be more ambitious?

Aronofsky: Look, I hope so for my own personal viewing pleasure. I think it all goes in waves. Things will be really slow, and then something like Get Out shows up and just blows people away. I think there's a lot of really great filmmakers out there trying to push the envelope, and hopefully they'll get opportunities to continue to do that.

Fandango: Was it difficult convincing the cast members? Who was the first person you went to? Did you write with any of them in mind?

Aronofsky: No, I didn't. I was very much writing in this allegorical, metaphorical, symbolic way. Then, I heard Jennifer might be interested. I went to see her, thinking there was no way she would ever do something this different. She got excited, and suddenly, she was attached. Then, I really needed someone who could stand his own against her, and that was Javier.

Fandango: How did the cast react when you showed them the finished film for the first time?

Aronofsky: Oh, Jennifer was like, "You know what? It's not really that scary. It's more beautiful." She saw the beauty in it. That's a word that's come out to me a lot is, after last night's screening I got a bunch of texts, and people said the same thing Jennifer said, which is that there's a tremendous amount of beauty in the film.

Then, I think Javier was very thankful to me for being included. Michelle Pfeiffer, I think, had a very visceral reaction. She went to the bathroom to sob for a little bit. Then, after she saw it a second time, at Venice, she said to me, "I really, really just had a whole different experience, because the tension was gone. I was able to sit back and take in all the details and all the different things that were going on in the film."

Fandango: There are times in this film where it's just wildly chaotic. There's tons of people stuffed into a small space. What was that like on set? I know you've worked with hundreds of extras before on films like Noah. I was on that set when you were shooting with those hundreds of extras.

Fandango: I imagine this was more challenging, because it was all in one house.

Aronofsky: Technically, it was definitely the most difficult thing I think me and my team ever tried to do. Even though on paper it was like, "Oh, we're just shooting one house." We wanted to tell the history of the universe in this one house. So, we had to figure out how to stay safe with all these different people doing all these crazy things. And, how to create this energy that would just be overwhelming for an audience.

Fandango: How many people did you have in the house at one time?

Aronofsky: I don’t really remember, but I think there were days when we were dealing with three, four hundred people.

Fandango: Wow… just in the house running around?

Fandango: And what’s fascinating about that is the entire time your camera is with Jennifer Lawrence because the story plays out entirely from her point of view.

Aronofsky: Yeah, it's a very hard thing when you get back to the edit room not to have wide shots or inserts, because that's a big secret of filmmaking. I wouldn't say it's a cheat. It's a tool that we have that whenever you run into problems, you could always cut out to a wide shot and things can reset. The issue with this film is that you always had to go back to Jennifer, and Jennifer had to be perfect at every moment. Luckily, she just constantly gave us all of these real and truthful emotions.

Fandango: You tell these stories that can be unraveled in so many different ways that I feel like your process really lends itself to TV. I was wondering if that was something that is crossing your desk or that you're involved with or maybe wanting to do in the future?

Aronofsky: Yeah, absolutely. TV's really, really interesting. It is the golden age, and so much character driven stuff is on TV. We, like everyone else, have been looking to develop stuff on TV. Hopefully, we'll get the opportunity at some point to do that, as well.

mother! is now playing in theaters nationwide, and you can pick up tickets to see the film right here at Fandango.

Interview: Director Doug Liman Says Tom Cruise Did All His Own Flying in 'American Made'

Interview: Director Doug Liman Says Tom Cruise Did All His Own Flying in 'American Made'