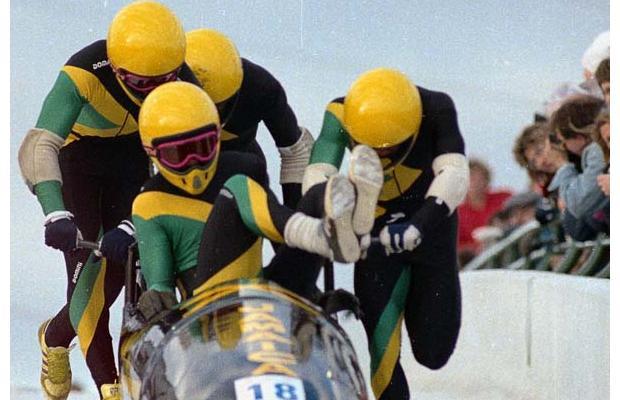 Get Pumped for the Olympics with These Winter-Sports Flicks

With the 2014 Winter Olympics due to kick off on February 7, it’s time to prepare for all the awe-inspiring, high-speed performances expected to go down in Sochi, Russia. Get ready for the cold, the underdogs, the big wins and the miracles--here are the most memorable, outrageous and rousing winter-sports movies out there.

“'Nuff people say, you know they can't believe, Jamaica, we have a bobsled team.” With the real Jamaican bobsled team just being qualified for the Winter Olympics, what better way to ring in Sochi than by watching Cool Runnings? In fact, after finding out that they qualified, the real team got hit with the realization that they couldn’t even afford the trip, but then a Cool Runnings fan stepped up to help them out. Their new sponsor, George Meireles of ZX Recruitment, told the L.A. Times, “The film Cool Runnings was a great inspiration to me,” and he pledged to donate over $65,000 to send the Jamaican bobsled team to Sochi.

Perhaps the time the Mighty Ducks competed in the Junior Goodwill Games as Team USA would have been more Olympics-appropriate, but it’s hard to compete with the 1992 original. In case you had a lapse in your childhood, the film features Emilio Estevez as Gordon Bombay, a former hockey star turned sleazy lawyer who gets busted for driving drunk and sentenced to community service coaching the local peewee hockey team. The movie is dripping in nostalgia, heart and the charm of a group of goofy kids trying to make names for themselves while having fun.

Between the 2004 movie Miracle and the true story upon which the film is based, you’ve got all the motivation you’d need to win big against all odds. Rather than load up his roster with hockey hotshots, U.S. head coach Herb Brooks opted to go up against the heavy favorites, the Soviet team, with just a single player from the 1976 Olympic team. Between the inexperience, the fact that their average age made them the youngest group in competition and the issue of college rivalries, the odds were against them in every respect. It turns out there was a method to Brooks’ madness and the team took down the Soviets in one of the biggest upsets in history.

You’ve got to be focused to win big, but you can’t be all business all the time, right? Lighten things up with Blades of Glory, which has Will Ferrell and Jon Heder playing two former ice-skating stars – until a petty argument decimates both of their careers. Now, the only way for Ferrell’s Chazz to come out of his drunken stupor and for Heder’s Jimmy to move beyond sorting stock at a winter-sporting-good store is for them to team up as pair skaters. Heder and Ferrell in tights dancing on ice is as awkward as it sounds, but the guys are so committed it’s impossible not to have fun with this outrageously silly scenario.

How could you take a pass on a movie that dubs itself, “Top Gun on the ski slopes?” Paul Gross and Peter Berg lead the 1993 release Aspen Extreme as T.J and Dexter, a pair of friends who relocate to Aspen to live it up on the slopes, mingling with the rich and famous as ski instructors. Trouble is, when T.J. excels on the slopes (and with the ski bunnies) and Dexter lags behind, their friendship can’t tolerate the divide. If only skiing really were the easy part.

How about putting some romance into the mix? In the 1992 release The Cutting Edge, Moira Kelly and D.B. Sweeney lead as athletes with promising Olympic careers until unfortunate events and bad attitudes squander all hopes for gold. Turns out, if Kelly’s Kate manages to keep her bratty behavior at bay and if Sweeney’s Doug can transform from a hockey player into a figure skater, they might have a chance at making the ultimate comeback, putting the medal and a little romance within arm’s reach.

Sportsmanship is preferable to violence, but if a Doug Glatt (Seann William Scott) popped up in the NHL or even at the Olympics, it’d be impossible not to root for him. Doug isn’t living up to his family’s expectations working as a bar bouncer, so when he’s recruited at a minor-league hockey game for dominating a fistfight with one of the players, he seizes the opportunity and accepts the position of the team’s “enforcer.” Despite making due on his nickname, Doug the Thug, Doug also manages to melt your heart with his polite demeanor and noble intentions.

The only good thing about being dumped for the captain of the ski team is that it's obvious what you’ve got to do to win your girlfriend back—which is crush her new man in a race down the most challenging slope available, the K-12. Once John Cusack’s Lane gets passed the initial devastation of getting dumped, he’s capable of anything—even skiing on one ski. It’s simple. You just “go that way really fast” and “if something gets in your way, turn.” See? Now we can all glide down the mountain effortlessly like Monique.

Even if your athleticism doesn’t reach Olympic heights, sports can still be a vital part of your existence, especially if you live in a place like Mystery, Alaska. The entire town comes out for the weekly four-on-four pond hockey games. It’s only a scrimmage, but hockey is a way of life in Mystery, so when the players pop up in an edition of Sports Illustrated, the stakes are higher than ever. Even more so for Russell Crowe’s John Biebe, because before he can get the chance to go head-to-head with the visiting New York Rangers, he’s bumped from the team in exchange for a younger rising star.

The half-hour 2009 documentary Appointment in Vancouver offers up the basics of ski cross, an event first included in the Winter Olympics in 2010. It focuses specifically on Casey Puckett, a talented skier who retired in 2002 to coach budding stars. When ski cross was named an Olympic event Puckett took another shot at a medal. He didn’t snag the win, but his passion and resolve is an inspiration. Check out the trailer for Appointment in Vancouver below, watch the film here and keep an eye out for the 2014 ski cross competition on February 20.

Check NBCOlympics.com for all the latest Olympics news and updates.