With Comic Con arriving like a bat out of hell next week, Entertainment Weekly has unveiled their Comic Con preview cover, which, of course, is all about Iron Man 2. Along with the cover, they’ve shoveled out our first look at Scarlett Johansson as Black Widow, aka Natasha, Tony Stark’s (Robert Downey Jr.) new assistant. 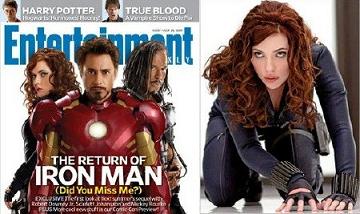 Checking out the image, she looks like a cross between Buffy the Vampire Slayer and the girl you fell in love with once from afar – and she definitely has a sorta Catwoman thing going on, right? The article also mentions a few more plot details, including the following:

• Mikey Rourke’s character Whiplash will have a cockatoo that he talks to while building a suit capable of shooting "whip-like beams".
• Sam Rockwell plays Justin Hammer, a fast-talking businessman who wants to be the next Tony Stark.
• Hammer and Whiplash team up to take down Stark.
• Johansson plays Stark’s assistant Natasha (aka Black Widow), and there may be a little love triangle thing going on between her, Stark and Pepper Potts, who’s since been promoted to CEO of Stark Industries.

Check out the entire article over at EW and definitely let us know what you think of ScarJo as Black Widow.