Film Mom: Why 'Monsters U' Makes Going Off to College Way Less Scary 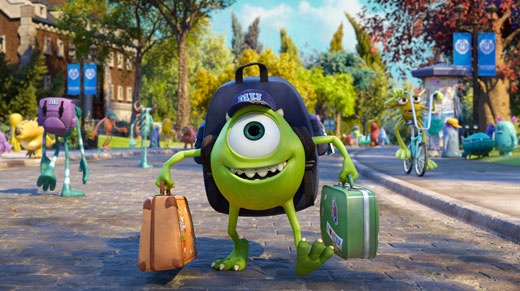 Last week, a pleasant, 32-year-old media professional shared her thoughts about Monsters University with me; while she thought it was an excellent film, she was surprised Disney Pixar would make a movie about going to college because "kids couldn't possibly understand that." As my Southern friends would say, "Bless her heart, poor little lamb. She doesn't get it."  Let me share with you my story.

I warmly recall watching Monsters, Inc. in the theater with my son when he was just seven. It was a kids' movie (or was it?) and yet I was astonished by the detailed animation that made me believe I could feel Sulley's blue and purple fur as it rustled in the wind. Even more surprising, after that last moment of the film where Sulley cracks open the door and we hear Boo squeal "Kitty!" my kid asked loudly enough for the whole theater to hear, "Mom, are you crying?" It was a wake-up call to the wonders of Pixar, the studio that subsequently gave kids one new, visually amazing, poignant film to look forward to every year. Millennials grew up with Pixar and now, with Monsters University, they're graduating with them as well.

Monsters University caps those years full of The Incredibles, Cars and Up by recognizing their audience has grown up.  Saturday, I saw Monsters University with my son, who is now 18 and headed to college just like Mike and Sulley. Watching the monsters deal with the hallmarks of university life – including a difficult dean and establishing what often end up being lifelong friendships – felt like two old friends were showing the ropes to my boy. Then, on Sunday, my son and I hopped a plane to Newark for freshman orientation at Seton Hall.

Releasing Monsters University 12 years after the initial release is perfect timing for the families who saw Monsters, Inc. together. In 2001, my kid believed a dragon lived in his closet at night. Now, Mike and Sulley are warding off another scary moment: leaving home and starting a life without parents. Here's hoping in 10 years, Disney Pixar finishes the trilogy with Monster Babies, and the circle can begin again.

Here are three movies to see with your family this weekend.

Monsters University. Not only was it fulfilling to my 18 year old, Monsters University was my two year old's first movie in the theater. He watched in awe. And hopefully, the 12 year old got the message I'm trying to brainwash into her head: "College -- all the cool kids are doing it."

World War Z. On the topic of educating our older teens, this PG-13 film is a how-to guide on surviving a zombie apocalypse. You can never be too prepared.

Man of Steel. If you're one of the few people who didn't see the Superman reboot last weekend, what are you waiting for? Just be aware, it's far more dark, violent, intense and profane than the Superman movies we grew up with, so it's a better film to see with kids 10 and up.

To see what kids think about these films, go to www.KidsPickFlicks.com, where all kids are movie critics. 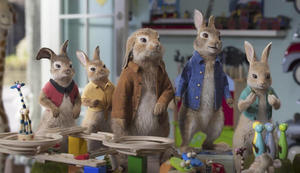