I’m a momitor – a mom who tries really hard to monitor what her kids are watching and playing, particularly video games. To me, video games are more dangerous because they're a first-person active experience compared to passive-viewing entertainment. My kids are banned from games that are rated M or where killing people is an objective. This practice, according to my children, has brought great shame upon them. An example? When I let my son wear a Grand Theft Auto shirt to school, he was mocked for wearing a shirt for a game he isn’t allowed to play.
After seeing Need for Speed, it struck me that perhaps the way to prevent kids from internalizing the video game experience is to let them see its movie adaptation. Need for Speed is an E- or T-rated racing-game franchise now turned into a PG-13 film that aims to bring the game's high-speed competition and crazy stunts to life. As a parent, I was first concerned about the film’s positive portrayal of reckless behavior and unsafe driving that injures innocent motorists and police officers.
But then it hit me: the movie is a true adaptation of a video game – not only the action, but the ridiculousness of it all. While the stunts in the film are real, they’re also unrealistic. Thus, evading cops with Crazy Taxi-driving tactics is as likely to bring imitators as, say, children dropping anvils on the heads of roadrunners. And so, in a weird way, being over the top actually makes Need for Speed more responsible. Need for Speed is, literally, a thrill ride – and when the film ends, the audience knows the ride is over.
Here are three films to see with your family this weekend: 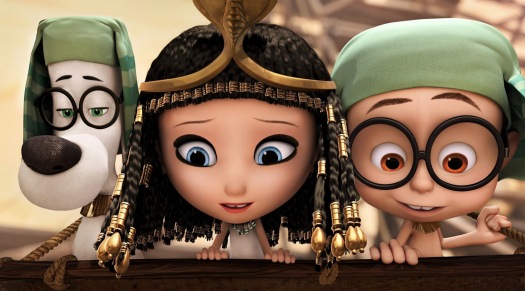 Ernest & Celestine. This children’s movie about overcoming prejudice is that Best Animated Feature Oscar nominee you hadn’t heard of.
Mr. Peabody & Sherman. Peabody’s WABAC machine allows Sherman to travel back in time, introducing world history to children in a vibrant, amusing way.
The Lego Movie. Everything is awesome. For all ages. For real.
See how kids review these films at KidsPickFlicks.com, where all kids are movie critics!
Like it? Share it: