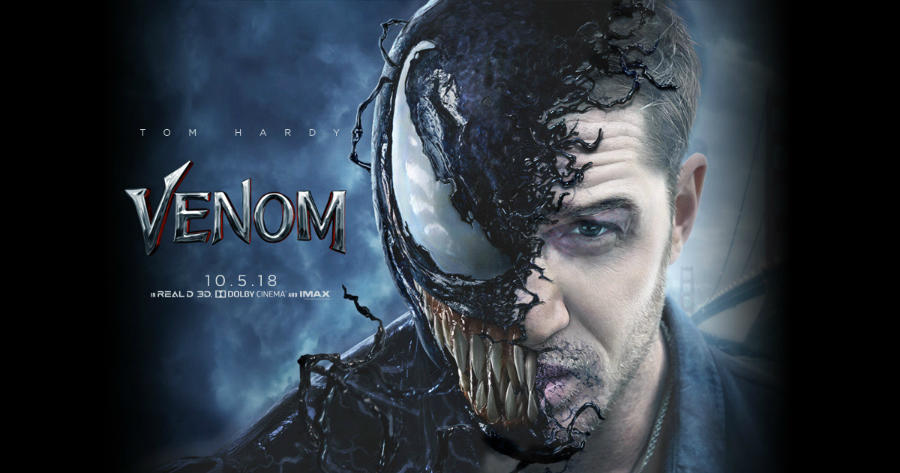 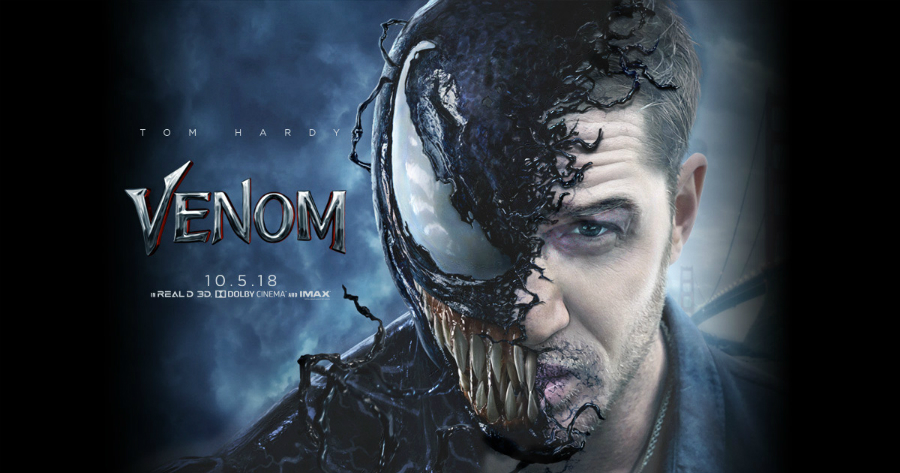 On October 5, the next official Marvel movie arrives in theaters, but it’s quite unlike anything we’ve ever seen from a Marvel comic movie before. Venom, starring Tom Hardy as the iconic antihero with the huge eyes, gnarly teeth and vicious tongue, looks to bring a refreshingly different approach to the comic genre. It’s darker, edgier and features a character fans have wanted to see in a standalone movie for decades.

“I was a huge Venom fan, and so that's why I got involved," director Ruben Fleischer told Fandango during an exclusive conversation to support advance tickets going on sale (buy them here). “As soon as I got involved, so many people came out of the woodwork and were telling me just how cool they thought the movie was and the character was, and how excited they were. As I've been working on it, I felt a groundswell of excitement from longtime comic book and Venom fans, and also fans of the cartoon in the 90s. I think that's also the basis of a lot of the fandom. It's been really exciting seeing people respond to the trailers and just all the elements that have come together for the film. It feels like there's a lot of really great support for the movie.”

Below, director Ruben Fleischer talks about how Venom separates itself from other comic book movies, as well as how, exactly, Eminem wound up on the soundtrack and how horror films like American Werewolf in London were a big inspiration on what’s shaping up to be the creepiest and freakiest Marvel movie yet.

Fandango: How would you say this is unlike other comic book movies or other Marvel movies? What do you think this film is doing differently than anything that we've seen previously?

Ruben Fleischer: When I set out to make the movie, I wanted to distinguish the film tonally, and I wanted to make a darker, grittier, kind of edgier comic book movie that also has a strong horror element, which is inherent to the character and the comic. Those were the aspects: darker, edgier, grittier. I think Tom Hardy embodies all of those qualities. The combination of Tom, Venom the character, and then the look of the film, which we really tried to make look, like I just said, edgy and gritty and dark and grounded of this world.

Fandango: Historically, Venom is a character that's very much tied to Spider-Man. What do you think makes the character worthy of his own story that's separate from Spider-Man and doesn't involve the webbed hero?

Ruben Fleischer: Venom is a standalone character who has so much attitude, menace and ferocity. He's also really funny in the comics and in our movie. He's a really compelling guy that can completely stand on his own. When he's played by Tom Hardy, and Eddie Brock is his partner, that relationship is enough for one movie. It's about these two entities coming together and forming one. That's a really exciting and satisfying relationship that is unique to a comic book movie and also very captivating.

Fandango: You talked about the tone being dark, gritty, edgy and funny. What were some of your cinematic influences coming into the project? Did you watch any other comic book movies for reference? What were you looking at?

Ruben Fleischer: As a comic book fan, I've seen all the comic book movies. I didn't have to watch them specifically for this. I was more interested in the kind of classic ‘80s horror movies. American Werewolf in London was a big influence on me, just because of the experience of being taken over by another. You know, [David] Cronenberg and John Carpenter, I just love his classic horror movies. Aesthetically, the director of photography and I talked a lot about the look of those films. Those were probably the ones that come to mind first as far as the look and the feeling of the movie.

Fandango: Venom's physical appearance is maybe a little bit more hulking than we've seen previously, at least in live action. You also have the tongue, the eyes, the teeth. What was the most important part of this character for you to get right, physically? What did you spend the most time sort of agonizing over?

Ruben Fleischer: You kind of said it. The mass of Venom. I mean, he's like a big, foreboding, physical presence. Actually, let me correct myself -  the eyes, the tongue, the mouth, those are his most distinguishing traits, and so making those look as photoreal and true to the comics as we possibly could was super important to me. I wanted to make sure that on-screen he just looked as real as he possibly could so you didn't feel any CG to him. Then, in tribute to the comics, I wanted to make sure that he felt like he just stepped right out of the pages and was as comic accurate as we could possibly make him.

Fandango: Were there any specific Venom comics that you looked to with regards to the story? Maybe something that people could go and read before or after they see it?

Ruben Fleischer: Absolutely. The Lethal Protector is probably the best one to start with, just because it takes place when Eddie and Venom leave New York and head to San Francisco, where our movie takes place. And there is a subplot about homeless people that we embrace for our film, too. There's a component of him being more of an antihero in that run of comics.

Fandango: You would say your Venom is more antihero than villain, or a bit of both? What kind of Venom are we seeing in this film?

Ruben Fleischer: Definitely antihero. You know, I think he is someone the audiences will really enjoy watching, but he's dangerous and-

Fandango: He's violent. I mean, he bites off heads and eats brains, right?

Ruben Fleischer: I don't know how heroic that is, but that's definitely true to the nature of the character and what he's doing in this film.

Fandango: Do you think you would do an unrated version of it on home release?

Fandango: Riz Ahmed plays a character who has also bonded with a Symbiote. What should we expect from him in terms of how he fits into the film?

Ruben Fleischer: Well, Riz is just one of the most exciting actors working today. He brings an intelligence to everything he does, but certainly, if you're playing a billionaire genius, having someone who's actually a legitimate genius at the center of that role is super important. The journey that Carlton Drake goes on is one of discovery, and then also he has to wrestle with what it's like to house the Symbiote as well.

Fandango: Will we see other characters with symbiotes within them?

Ruben Fleischer: Yeah. I mean, one of the traits of a Symbiote is that they can jump between different hosts and can potentially go into anyone. That's part of the film… you never quite know who or where they might turn up.

Fandango: Eminem is doing a song for the film. How did that happen? Is he a big Venom fan?

Ruben Fleischer: Yeah. It was pretty incredible. He reached out to us, and is a huge Venom fan, and made the track for the movie. We were beyond thrilled. It's a really incredible song. To be able to have him be a part of the movie is really exciting.

Fandango: Has anybody else helped in terms of kind of ideas? Any other celebrity Venom super fans?

Ruben Fleischer: I can't say quite exactly who else is going to be involved, but I will say it's surprising how many musicians are huge fans of Venom. It's been exciting to see the possibilities that exist with potential artists who are fans of the comics.

Fandango: Is this a movie that's got a lot of Easter eggs in it, that people should keep their ears open? Characters, or storylines, or plot threads, and even cameos?

Ruben Fleischer: Yeah, I definitely tried to pepper in Easter eggs throughout the film. Some are more obvious than others. I'm excited for fans of the comics to see the movie and try to spot them. One thing I will say is that, you know, at least was really gratifying for me, is when the trailer came out, people recognized frames that were taken directly from the comics that we tried to recreate in the movie. That was really gratifying to me to see that people appreciated that we literally lifted iconic frames from the Venom comic book and put them in the movie.

Even a line that's featured in the trailer: "Eyes, lungs, pancreas. So many snacks, so little time," is directly taken from the comics. It was exciting to me that people recognized that and appreciated that.

Fandango: Is this a film that's going to set up a larger universe of characters or is this its own self-contained thing that isn't kind of pointing to other narratives down the line?

Ruben Fleischer: It's definitely about Eddie and Venom, and their relationship, and making them as ... you know, forging their bond, which will allow them to go on many journeys together in the future.

Fandango: Should people stay for the credits?

Ruben Fleischer: I think it would be a mistake of any superhero movie not to stay through the credits.

Fandango: After Venom you’re doing a Zombieland sequel. Where is that at currently?

Ruben Fleischer: I'm thrilled. We're already actually starting Zombieland. I've been scouting and storyboarding and getting it going, and to get to work with that cast again is just an absolute dream come true. It's been really exciting starting to think about that movie, and to get to work with Emma, Jesse, Woody and Abigail once again is truly a dream come true. Yeah, we're just at the very early stages, but we have an amazing script, and we're going to start shooting in Georgia in January.

Fandango: And a lot more zombies?

Ruben Fleischer: Yeah. I mean, it's been 10 years, so who knows what the world will look like at this point?

Venom hits theaters on October 5. You can snag your tickets right now here at Fandango.

First Trailer for ‘Captive State’ Arrives; Here’s Everything We Know