Exclusive Trailer Premiere! 'Tyler Perry's I Can Do Bad All By Myself'

Tyler Perry and Madea fans, red alert! Fandango (and our sister Comcast sites Comcast.net and Fancast) has the exclusive scoop this morning, bringing to you the first full-length trailer for the next Mable "Madea" Simmons extravaganza, Tyler Perry's I Can Do Bad All By Myself. One more treat. The story co-stars the luminescent Taraji P. Henson, straight from her Oscar nominated turn as Queenie--Brad Pitt's momma--in The Curious Case of Benjamin Button. We'd watch her anything, so the prospect of teaming her up with feisty 'ol Madea...well, Tyler fans, Madea fans and movie buffs in general, get ready for some cinema goodness...watch the trailer in HD or watch it in SD here! The movie opens soon on September 11, 2009. 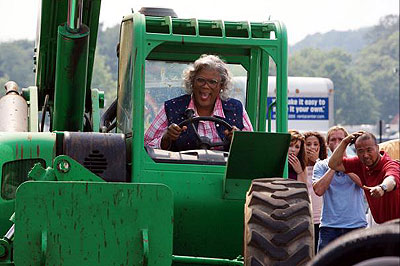 You Pick the Hottest Story of the Week

You Pick the Hottest Story of the Week