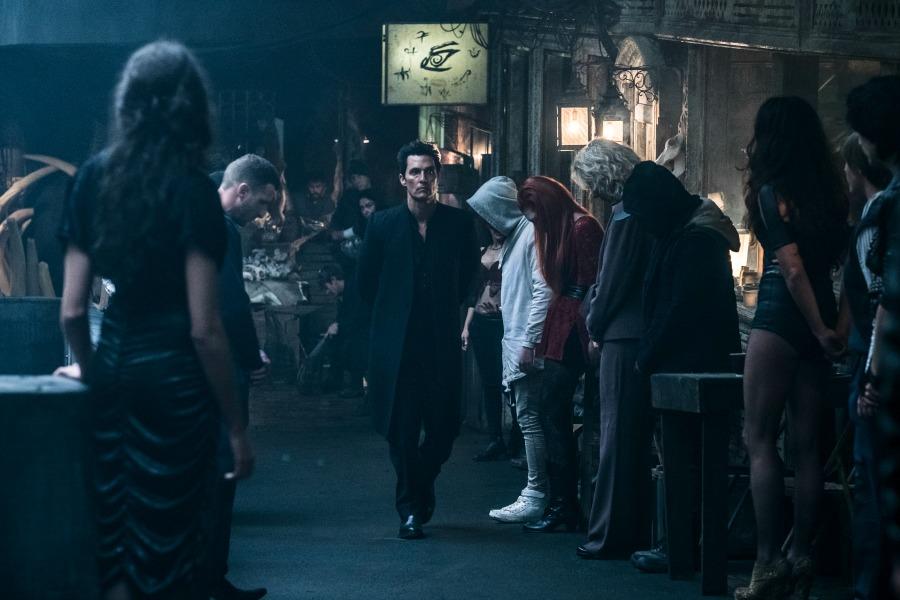 Exclusive Interview: Matthew McConaughey on How 'The Dark Tower' Is Like Nothing He's Done Before 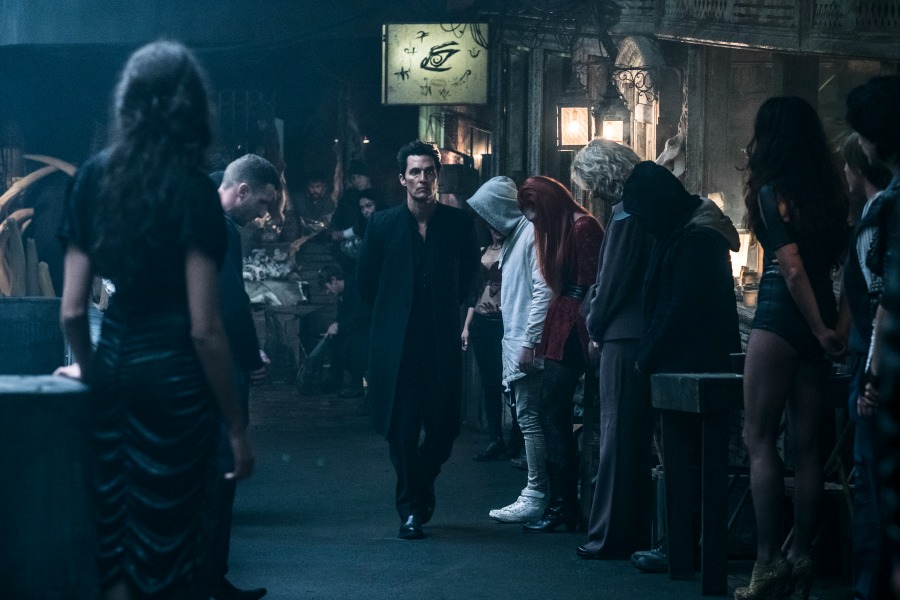 It’s been years in the making, but on August 4 fans of Stephen King’s legendary Dark Tower series will finally see its characters come to life in an ambitious new adaptation that will not only tell stories on the big screen but the small screen, too.

Described as the “ultimate battle between good and evil,” The Dark Tower follows the story of a gunslinger (Idris Elba) who is locked in an eternal struggle with Walter Padick (Matthew McConaughey), aka The Man in Black. A Dark Tower, said to be what holds the entire universe together, is at stake, with the Man in Black looking to destroy it and the Gunslinger fixin' to stop him.

The first trailer for the film debuted today, and you can watch it below.

Based on that trailer, we know The Dark Tower will offer up some epic gun-fu and universe-bending (maybe ending?) theatrics, but what else can we expect from the King adaptation? Fandango spoke to the Man in Black himself, Matthew McConaughey, to coincide with the trailer debut, and we began our conversation by asking him what separates The Dark Tower from the rest of the big blockbusters heading our way this summer.

“One thing that’s original is it is the land of the ordinary with the extraordinary,” he said. “That blend of the fantastic with the grounded reality, it’s a little different. It’s not so far removed from our own mortal imagination. Walter is still a man; these people bleed. They are not above the pains of mortal beings. It truly has that great mix of the fantastic and the real.”

McConaughey’s Man in Black is mysterious and deadly, described in the trailer as being worse than the devil. His powers include shape shifting, traveling to different portals and mind control, among others. He’s evil, but the sort who gets off on being evil.

“He kills in all kinds of ways,” McConaughey said. “Sometimes it’s out of boredom; sometimes it’s by exposing hypocrisies. A lot of his powers have to do with mind control. He can put a thought in someone’s head and they can impose themselves. He has a great line in the trailer – “Death always wins.” The deck is stacked against humanity and he takes delight in it.”

On how often we see Elba's Gunslinger and McConaughey's Man in Black square off... 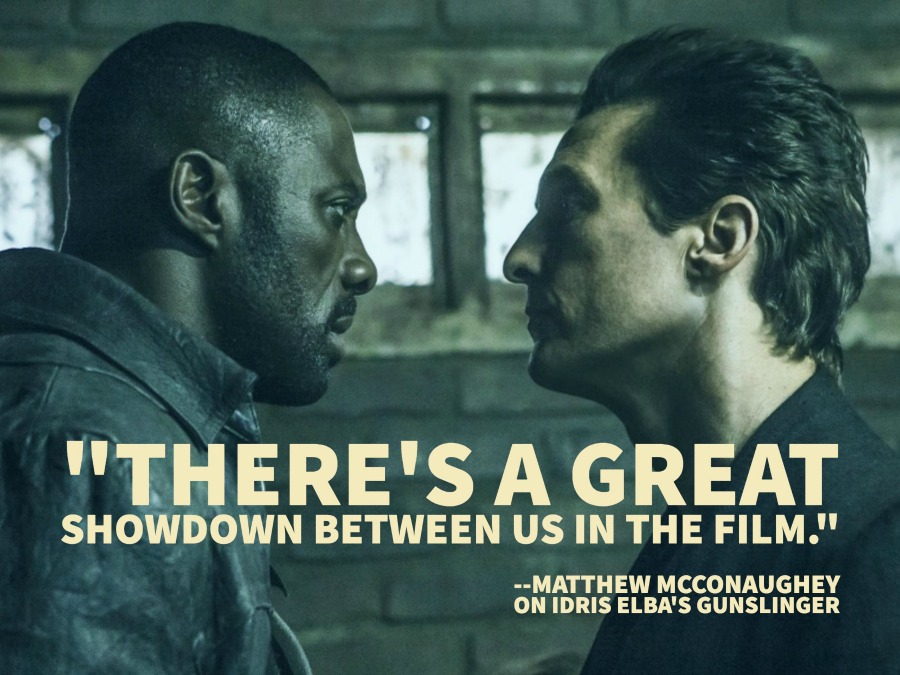 "[Sometimes] Walter is literally there, and other times I'm just f**kin' with him, shapeshifting, getting into his mind," he added.

McConaughey readily admits he didn't read all eight books associated with King’s Dark Tower series, but what he did read he used as fuel. Same goes for his conversations with author Stephen King about the character.

“He and I spoke quite lyrically,” McConaughey said when we asked what he took from those conversations with King. “[We spoke] about how Walter has the world by a string and he always has a half-cocked smile on his face about it. There’s an enjoyment that comes with his puppeteering. He sees himself as the minister of truth.”

The actor won his first Oscar for 2013’s Dallas Buyers Club, and since then he’s leaned into just about everything, shifting from genre to genre, captivating us with roles on the small screen (like Rust Cole in True Detective), as well as voicing characters in popular animated films (like Sing and Kubo and the Two Strings) and then also starring in major sci-fi event films, like Christopher Nolan's Interstellar.

So is he more excited right now about TV or film?

“F**k what medium it’s in, I just chase the best story,” he said about his role choices.

When it came to deciding to star in The Dark Tower, McConaughey was drawn to its out-thereness. “This is unlike anything I’ve ever played. I’ve never done this,” he said. “It’s my first jump into this multiple worlds, this shape shifting — this kind of movie." 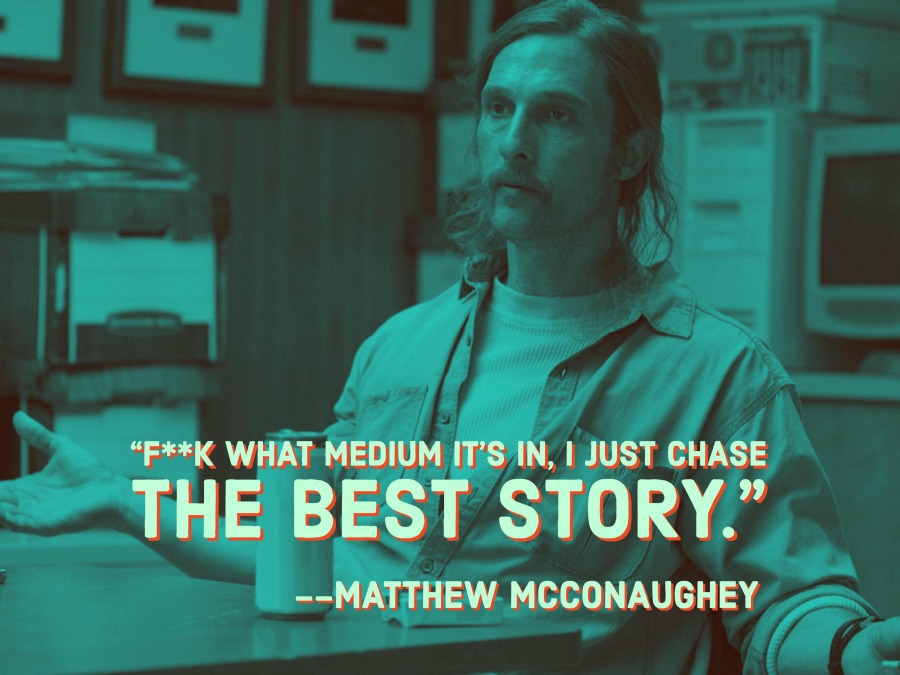 Though he never named specific movies, his desire to begin a franchise rather than add onto an existing one is what sold him in the end.

"Others have passed by my desk -- others that were franchises that were off the ground [already]," he said. "[I was being] offered roles in sequels, but for me I felt like I was looking for the right one. [With The Dark Tower] I can get in on the ground floor; I can have ownership and authorship and introduce a possible franchise. [For me], that’s more attractive than being on something that's already successful.

More McCona-bites on The Dark Tower... 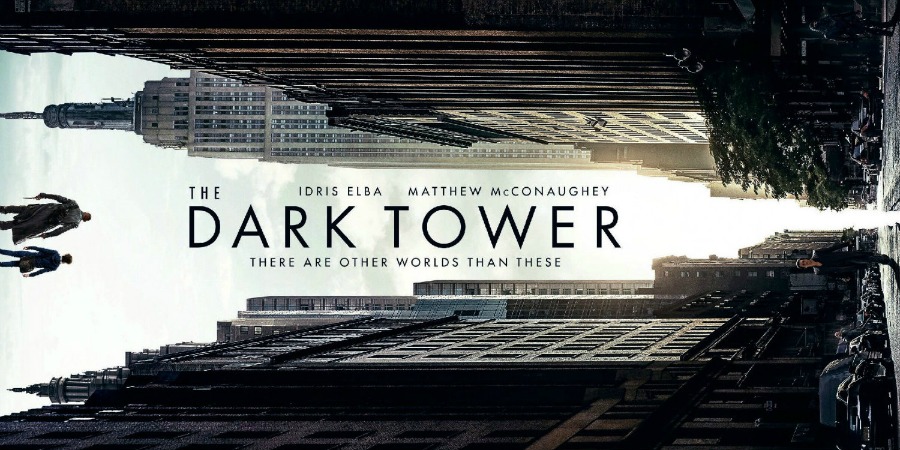 Will the film open with the same iconic line from the book: “The Man in Black fled across the desert and the Gunslinger followed"?

McConaughey: Well… you’ll see. This film is an amalgamation of quite a few different books. If you know the books you’ll recognize where we put different things together. This is the first chapter in a series of stories that if people show up, we have a lot more to tell.

Speaking of more to come...

Will Matthew McConaughey be involved in the planned Dark Tower TV show?

McConaughey: Yes, I am somewhat involved, but to what extent we’re still figuring that out.

Considering his character appears in different forms in other Stephen King novels, is it possible McConaughey may cross over and star in additional King adaptations?

McConaughey: Yes, that is very much still something we’re open to discussing — [the] great thing about Walter is he shows up in these other different things. He’s everywhere. If this is a success, the opportunities are endless. I’d love to explore that.

McConaughey: You know what I say... go see the show so you don’t miss your appointment with the lightning! 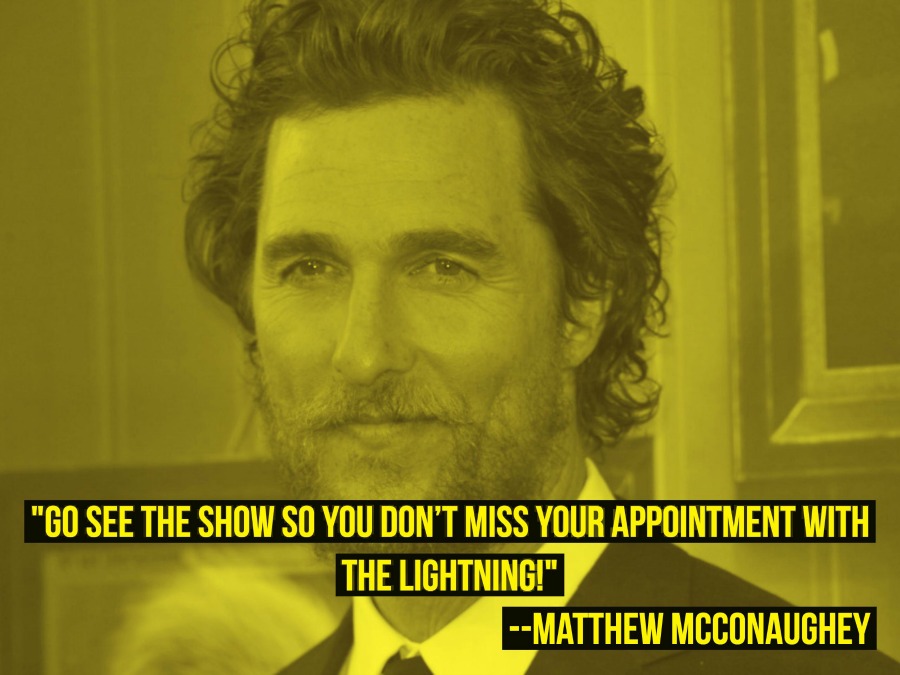