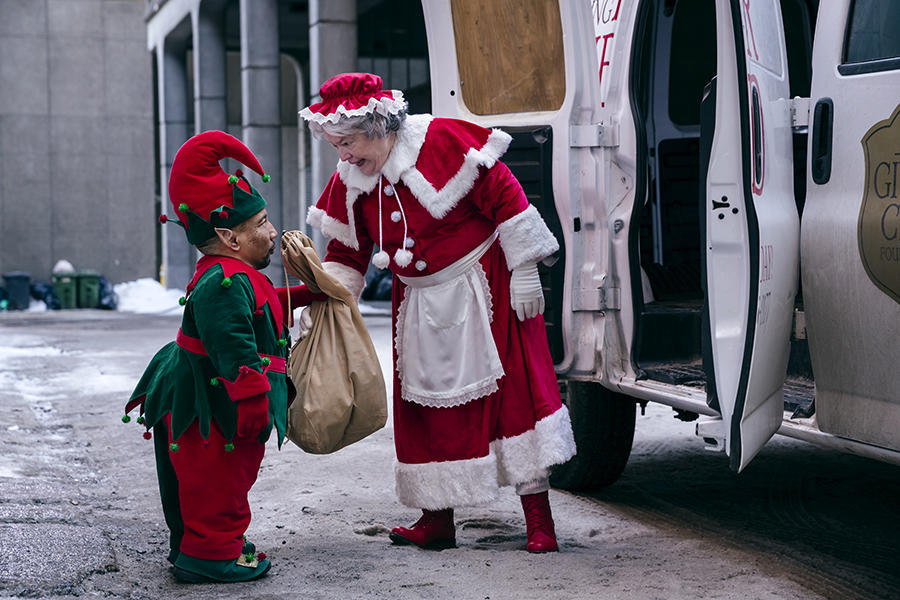 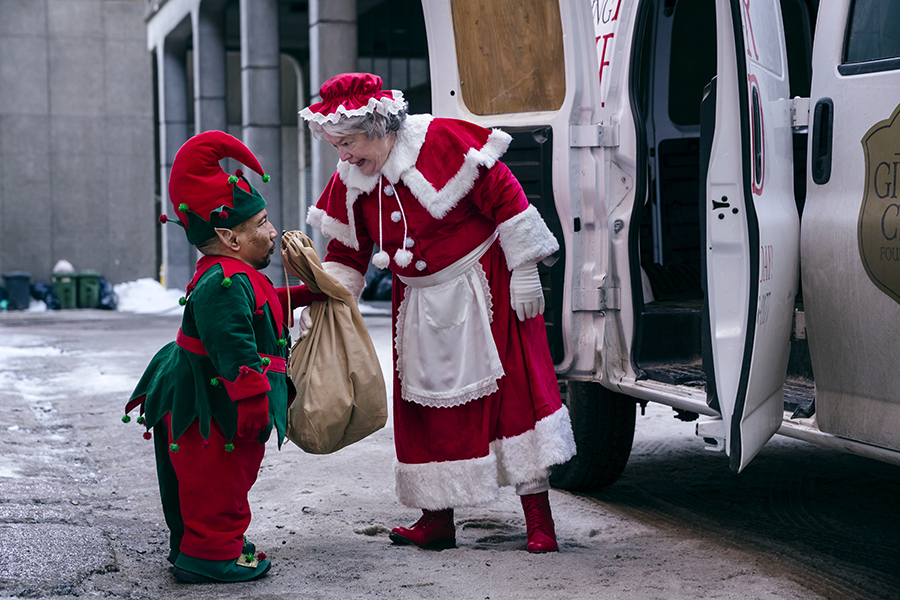 In the sequel Bad Santa 2, we get to see just why Willie Soke (Billy Bob Thornton) is such a down-on-his-luck, foul-mouthed, alcoholic mess. Enter Willie's mother, the repugnant Sunny Soke, played with relish by Kathy Bates.

It's been several years since Willie pulled any heists with his angry little sidekick Marcus (Tony Cox), and life still hasn't treated him any better. In fact, it's way worse. He can't keep a job, is always drunk and Thurman Merman (Brett Kelly), now a 21-year-old man-child, still hangs around. So when Marcus shows up to ask if he'll help him knock off a Chicago charity on Christmas Eve, Willie goes for it – until he finds out their third partner is Sunny (Bates), who has an agenda of her own. Against his better judgment, Willie goes along with the plan, which naturally does not go smoothly.

Fandango sat down with Bates to talk about why she loved the original Bad Santa so much, channeling her inner biker chick, working on American Horror Story and its links to her ancestry and more!

Fandango: What was it about the original Bad Santa that you loved the most?

Kathy Bates: The chemistry between Tony [Cox] and Billy [Bob Thornton]. Sometimes I'll be just flipping the channels, and it's on, and I'll be “Okay, I just want to watch the scene with Bernie Mac when he's with the kid who's trying to steal the DVD.” Then it's, “No, no, I just want to watch the one scene with John Ritter when he's talking to Bernie Mac. And Bernie Mac is talking about having sex with fat women. I get to see John Ritter go [screws up her face].” They were so funny, so many moments. I also remember there was this one moment when Tony and Billy are just walking down a parking lot, talking, and I'm just riveted. I don't even know what they're talking about, but Billy finishes a beer and throws it at the car and the alarm goes off. I just wanna hang out with them. I love to hang out with them. But it's true what they say about Tony, he's a very devout Christian. Someone said about my performance in Misery that I was [using a Scottish accent] “Consorting with the Devil.” And I said that to Tony, “You've been consorting with the Devil, my dear boy” to come up with [Marcus]. If they hadn't been in the remake, I would have had to think twice about signing up.

Fandango: Your character also represents the sadder part of Willie's character – being that he was an abused child –  and why he connects to Thurman so much.

Bates: Willie managed to hold on to his heart and the heart he is looking for. I don't want to get too esoteric here but because of his own past he has more sympathy for Thurman. I think Thurman is just innocent, unblemished. He's a blank slate. He's passionate about people and about sandwiches. But there's a reality in that. I think there's still a line in there, when he says, “That's not how you make a sandwich.” It's like he has his reason for living, and I love all that because it all comes out of character. He's not trying to be funny. 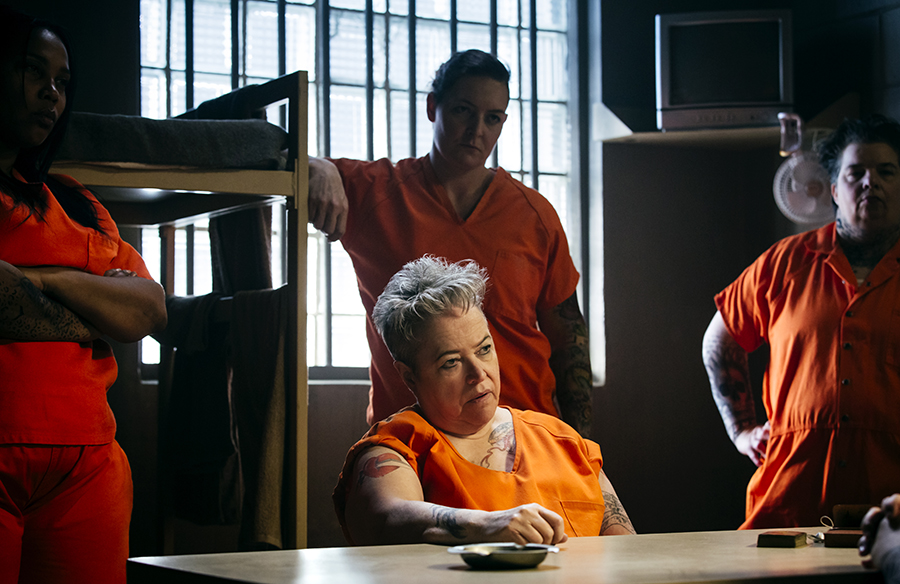 Fandango:  How did you tap into Sunny?

Bates: In creating her, I can't remember if the egg or the chicken came first. I like to think that they thought of her as a biker chick or if she was already that way in the script, but we just dove in head first. I was working on American Horror Story, and the makeup artist on that created the tattoos and getting into the vintage clothes. [Costume designer] Mario Davignon had done Baz Luhrmann's Romeo + Juliet, so he had all these vintage silver eagles and stuff. It was just so much fun to play. I love getting into her butch motorcycle drag. I really loved it. You know, sometimes I just think, God, I'd love to be punk. It's funny, as soon as we come into this world, we're assigned a character. And because of our corporeal situation, there's only so far we can go. Or we think because of how we were raised... I mean,  my mother, who has been dead several years now, if she saw me doing this part, she'd say, “Oh Kathy, how common. That's just common.”

Fandango: What would she think about the characters you've played on American Horror Story?

Bates: Oh, please. Do you know the first year I did AHS and played Madame Delphine LaLaurie [in Coven], I have family connection to her. My great-great grandfather came over from Ireland and went to New Orleans; he landed there. He was a doctor and was actually Andrew Jackson's doctor. Wow, right? Well, his plantation was right next to hers. There was a book that I read that was so detailed. The colony was one time owned by Spain, one time owned by France, both Catholic. So the Catholic diocese kept meticulous records of who owned who because slaves were property and when they are traded and so on. When I read this book, I thought, holy crap, I bet my great-great grandfather knew her because in 1834 is when the s**t hit the fan, and it was revealed she had tortured all those people. He would have been there then.

I didn't really find this out until after the season. I didn't know it until I started looking around because she was this real person. Most of the books were kind of scandalous, tabloid-like, and finally someone sent me this book and said it would really tell me everything about real stuff from the period. No one even did a portrait of her, so no one knew what she looked like. It was fascinating. I wanted to use a French accent to play her, but Ryan Murphy said no. [Laughs]

Fandango: Who were some of your other favorite AHS characters?

Bates: I loved the Bearded Lady. She was great, I really understood her for some reason. It was harder to find [her character in Hotel]. For me, as a character actor, I want all the bells and whistles. But to be someone who could be so invisible, nondescript, it was harder. But I loved this last season, playing the Butcher. Angela Bassett directed episode six, when Cheyenne Jackson comes in as the producer and the whole thing changes. I loved working with her on that one, because she's such a brilliant actor. I only had the one scene, and I had some preconceived notions on who [this woman who played] the Butcher might be. And Angela just gently took me 180 degrees the other way. When I finally hit it, she came running out and we were both, “YES! We got it!” It was so much fun because you usually don't get that opportunity to get meticulous about one scene.

Fandango: Do you get more recognized by fans because of AHS now?

Bates: Misery is still a lot. Or Waterboy and Titanic. But yes, now AHS. I had a horrible experience recently. I was in New Orleans and was going to a drugstore. I met a woman and she says, “My daughter just loves American Horror Story and she's here!” She calls her daughter over and she's seven. [Grimaces] But the little kid is just standing there, and I can't just turn to the mother, “You let your kid watch this s**t?! Really? Are you out of your mind?” Even my grand niece wasn't allowed to watch until this last year, and she's turning 17.

Fandango: Do you feel like TV has just opened up a whole new world for actors?

Bates: Absolutely. What's wonderful about it is that those of us who have become fine wine, as we say, who are aged, are getting all this opportunity. I mean, Ryan Murphy changed my life. My show got canceled; I got breast cancer. They said our viewership was too old that's why. So it was like, “Okay, game over.” But then I got this interview with him and suddenly it was like, “What has happened?” I've  just had this opportunity to play all these amazing parts with amazing people. I can't believe it! I just can't believe it! And now I go in a binge and see actors like Felicity Huffman and Regina Hall in American Crime... I sent them both notes, telling them I would have handed them the Emmys myself. I look at it a little selfishly, someone who's devoted their life to the craft, passionate about it, to see now these people taking the ball and still running down for the touchdown. It just makes me feel so good. Because the craft is always evolving, and I'm still learning.