Exclusive Interview: Christopher Nolan on Why 'Dunkirk' Is Like Nothing You've Ever Seen Before

As we approach a summer movie season packed with big blockbusters, one film in particular sets itself apart from the rest due partly to the fact that the man behind it is one of today’s most exciting, boundary-pushing filmmakers: Christopher Nolan.

The movie is called Dunkirk (in theaters July 21), and it tells the riveting true story of thousands of allied soldiers during World War II who were trapped and surrounded by the German army.

“It’s one of the great human stories, and it’s one of the most suspenseful situations that I had ever heard of in my life,” Nolan told Fandango in the very first extensive interview he’s given about the film. “You have 400,000 men – the entire British army – trapped on the beach at Dunkirk. Their backs to the sea, home is only 26 miles away and it’s impossible to get to. The enemy is closing in, and there’s a choice between annihilation and surrender. I just think it’s the more extraordinarily suspenseful situation. That, I think, speaks to a lot of things that I am interested in with film.”

Interestingly, Nolan doesn’t consider Dunkirk to be a war picture. He calls it “a story of survival,” and during our conversation, we spoke about everything from the incredible groundbreaking aerial battles to why the director behind Interstellar, Inception and the Dark Knight trilogy feels Dunkirk is a game changer for the IMAX format.

Fandango: So how, exactly, does Dunkirk push IMAX to the next level?

Christopher Nolan: Really, I think Dunkirk represents the culmination of all of these experiences we’ve had over the years [with IMAX]. How to work with that format, and how to really try to give the audience the most visceral experiential two hours that they can hope for.

Fandango: Is this the most you’ve ever worked with IMAX cameras on a film?

Nolan: Yes, there’s absolutely more IMAX [than we’ve ever done]. The entire film is large-format film photography, and I’ve never done that before. Very few people have ever done that before, and no one has ever shot as much IMAX as we’re doing. Most of the film is IMAX. With every film we’ve learned more and more how to maximize our ability to use those cameras, and we found ways to get those cameras into very unusual places for a camera that size, but the image quality speaks for itself. I think it’s going to be an extremely exciting presentation, particularly in those IMAX theaters.

Fandango: What is going to surprise audiences the most, especially fans of yours?

Nolan: I think people who know the story of Dunkirk, in particular, may be surprised by the intensity of the experience. It’s a very suspenseful story and we really try to do justice to that. The pacing is relentless, and the story and action scenes are extraordinarily intense. I think the lean, stripped-down nature of that, and how fast it moves, and what it puts you through in this short space of time… I think it has a different rhythm that I’ve worked in before. 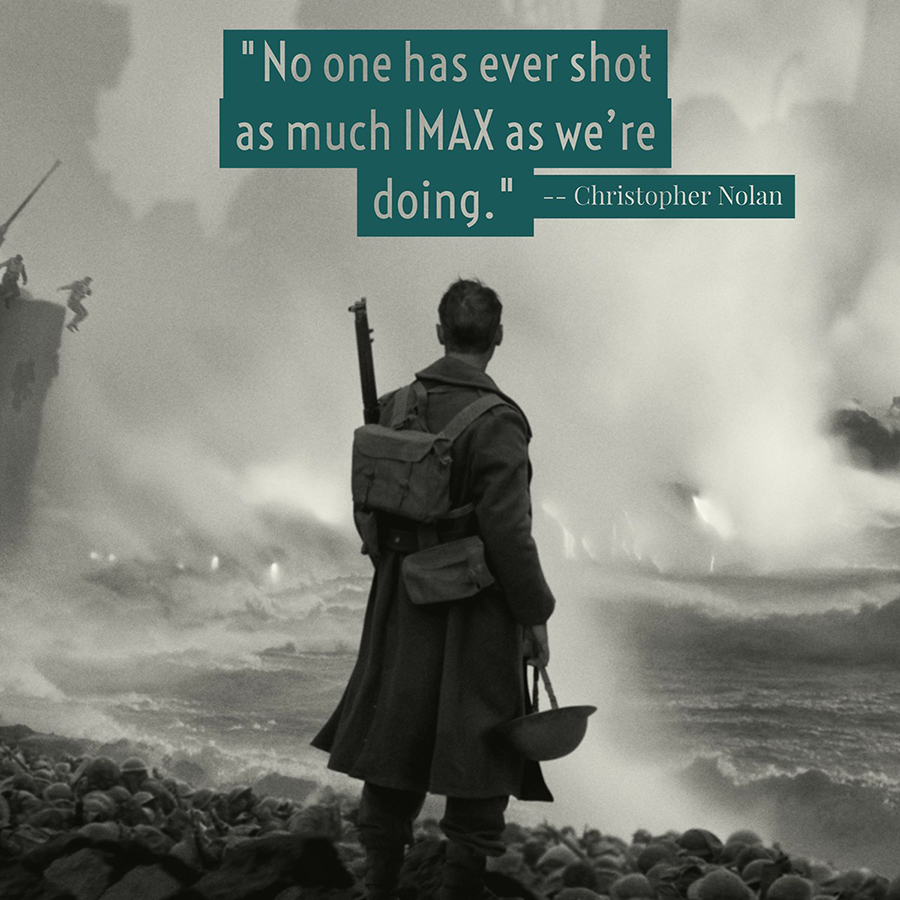 Fandango: What’s something you did on this film that you’ve never been able to do before?

Nolan: I think every kid – or certainly British kids – would love to be able to fly a Spitfire. [That was] just an extraordinary experience for me. And then to try to give the audience that same experience, we had to find a way to get giant IMAX cameras into these tiny vintage planes, and really try to be in the experience of a dogfight in a Spitfire above Dunkirk – that was remarkable. It’s an experience I will remember for my whole life.

Fandango: What was it about this story that convinced you to make Dunkirk your next film?

Nolan: Well, one of the things I loved about the real-life story is it involved so many different aspects and so many different geographies. You had troops on the ground, on the beach, trapped and facing a choice between annihilation and surrender. You have people coming across on boats, braving the waters of the English Channel. You’ve got the Navy on their Destroyers – all these different things to explore visually. It was just a lot to dig your teeth into, frankly. And then trying to technically create the action in a way so that you really feel the intensity of it -- you really get inside it. That to me was an interesting challenge, and one I spent a lot of time developing.

Fandango: The aerial sequences in this film sound amazing, like the sort of stuff we haven’t seen before on-screen?

Nolan: Oh yeah, I don’t think anyone’s ever tried to do aerial combat the way we’ve done it and photographed it in this film. My DP, Hoyte Van Hoytema, just never gave up. When we would look at how you can’t fit a camera in the cockpit and fly the plane, we would build a special kind of snorkel lens and put the camera there. We’d work with the pilot and plane owners to really just go for it, and do as much of it for real as possible. 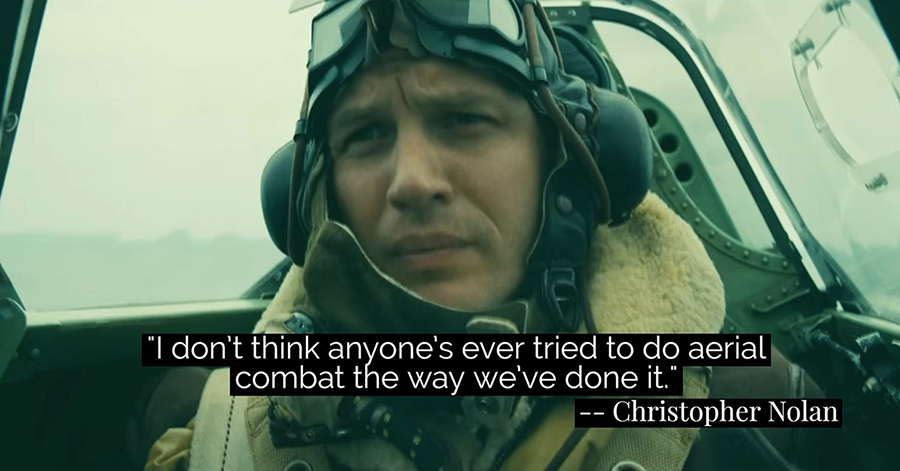 Fandango: Was that dangerous?

Nolan: No, because the thing with aviation is that safety is the most important thing. So the difficulty is in planning; the difficulty is in how on earth is it possible to do this safest? The engineering of it; you have to put in months trying to figure out how to balance it. How much wind resistance there will be. All this stuff, it was relentless for months and months. You address the danger on paper, and then these pilots get up in the air and do it safety, but it feels dangerous. It feels extremely exciting, and we’re really working hard to finish the film with our sound and music to really give people the experience of being up there like that.

Fandango: There’s a story out there saying that you bought a real World War II-era plane, rigged it with IMAX cameras and then crashed it. Is that true?

Nolan: Not true. I think the reason that rumor developed was because we did a lot with real planes. We figured out how to get the pilots and these planes to be able to do these dogfights very much for real. We then constructed perfect replicas to be used to crash – and I think the two things got confused. We would never crash a vintage plane; they are far too valuable. And I don’t just mean financially valuable. The Spitfire, for example, is just the most magnificent machine ever engineered. It’s just the most wonderful thing.

Fandango: We’ve also heard Dunkirk is light on dialogue. Talk about that decision.

Nolan: Yeah, you know it’s the kind of film where the visual aspect of the film is dominant right from the get-go. There’s dialogue in the film, but we really tried to approach the storytelling very much from a visual point of view, and an action-and-suspense point of view. Trying to create suspense visually -- a visceral sense of what it would be like to be confronted by this awful paradoxical situation. 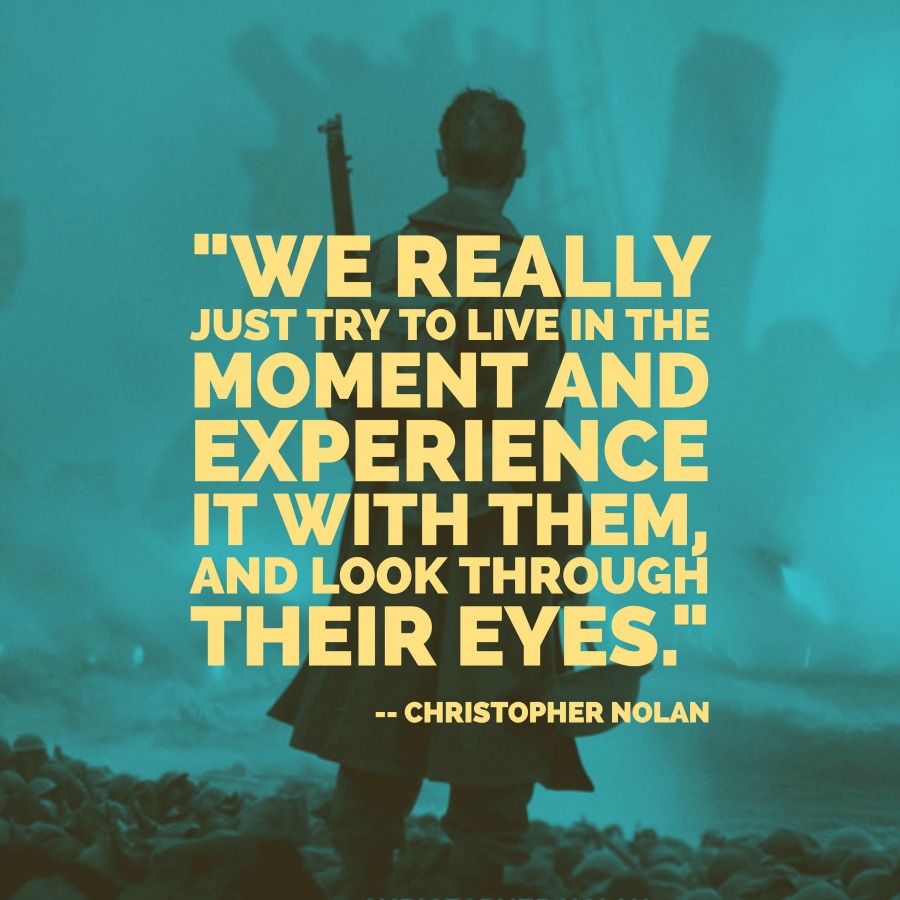 Fandango: What are you most personally satisfied about Dunkirk?

Nolan: I think the visual nature of the storytelling is something I’m excited about. It’s something I value in films and film history; I’m an incredible lover of silent films. The challenge of taking on what I call a present-tense narrative – that is to say, we don’t learn a lot about the people we’re experiencing this with. We really just try to live in the moment and experience it with them, and look through their eyes. That was the challenge of the film, and as it is shaping up I think that, for me, is the thing that I challenged myself the most with and I am excited about that.

Fandango: Your brother Jonathan is pretty busy these days working on the show Westworld, but you’ve worked together in the past and do you have any plans to work together again in the future?

Nolan: Sure, I mean he’s a bit busy these days. We always value our collaborations, though, and I’d love the opportunity to work together at some point.

Fandango: The last time we spoke, you were still certain we’d never see those homemade Star Wars movies you and your brother Jonathan made as kids. Is that still the case?