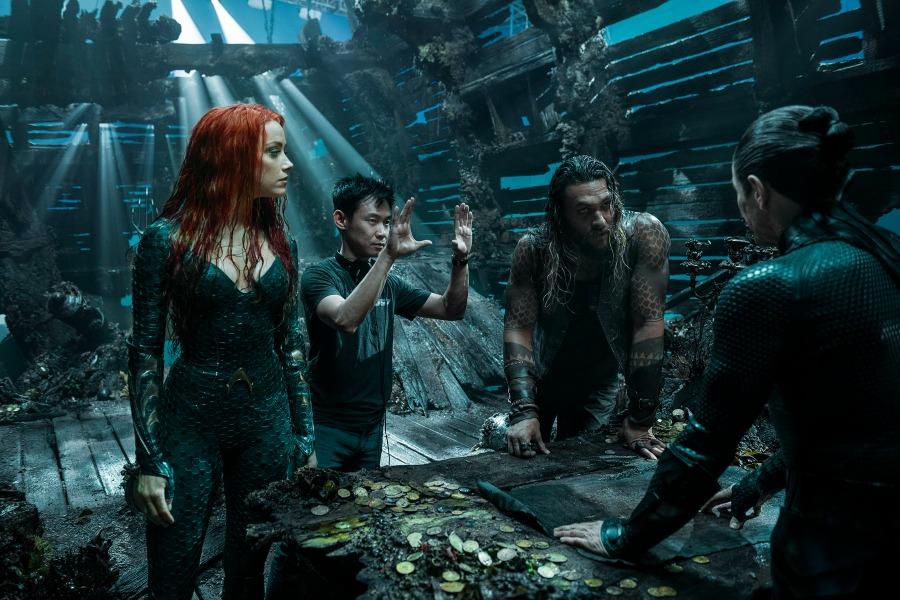 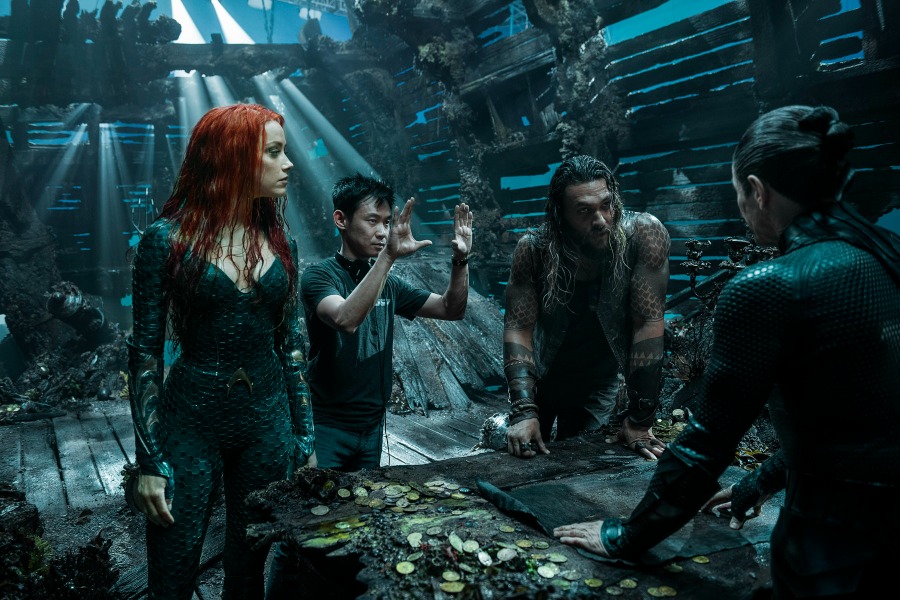 Arguably the most anticipated moment at this year’s San Diego Comic-Con was the moment that the very first Aquaman trailer debuted. Visually stunning and packed with all kinds of underwater mayhem, Aquaman marks the very first live-action solo movie for the popular DC character, played by Jason Momoa. While it doesn’t hit theaters until December 21, Fandango was able to snag an early look at the new trailer and break the entire thing down with Aquaman director James Wan.

“Definitely the biggest thing that I've learned and carried across on all my films is how important it is to create characters that you like,” Wan said. “If you don't like your characters, you're not going to be scared by what they go through. That's one of the most important things that I've learned in just my horror filmmaking is creating people that you can relate to. That's such a universal filmmaking language for any mainstream movies you make. You want to create characters that people can relate to, and that they like, and that they therefore want to go along with them on this journey. That's what I've learned and brought on from my horror films into all the movies that I make.”

So what’s the deal with kid Aquaman? Who is Aquaman fighting on that submarine? What’s that giant piranha-looking creature? From the different kingdoms to the visual inspiration for Atlantis and more, here’s your exclusive Aquaman trailer breakdown from the director himself, in his own words.

But first! Watch the new trailer below.

The trailer opens with Arthur, a.k.a. Aquaman, as a little kid…

James Wan: I think I need to find a very human way into this story, and Jason Momoa is not necessarily your everyday man, right? You don't look at this guy and go, "Oh, that's me." Right? You look at that guy, and you go, "That's who I want to be."

So I know I needed to start the movie off with the love story between his mom and dad. I know a lot of fans are excited for the love story between Arthur and Mera, but for me, the movie is as much, if not more, the love story between Tom Curry and Queen Atlanna. How Queen Atlanna, from a completely different kingdom, far more civilized, so to speak, than we are, could fall in love with a simple human being on the surface. A surface dweller. It really shows the power of love. How love is blind to any of that, and how through their love, Arthur is born. I thought that is a very important emotional backbone to have because that emotional backbone basically drives Arthur's entire emotional arc through the film. Anyways, because of that, that's one of the things that we really want to get across in the trailer. Just the humanity of it.

When we first see Nicole Kidman’s character, Queen Atlanna, she looks as if she washed up on shore…

James Wan: You want to play to the romantic theme of the sailor who comes across the mermaid, and then falls in love with the mermaid, that kind of stuff. That's what this movie is. It has that romantic, nautical motif. 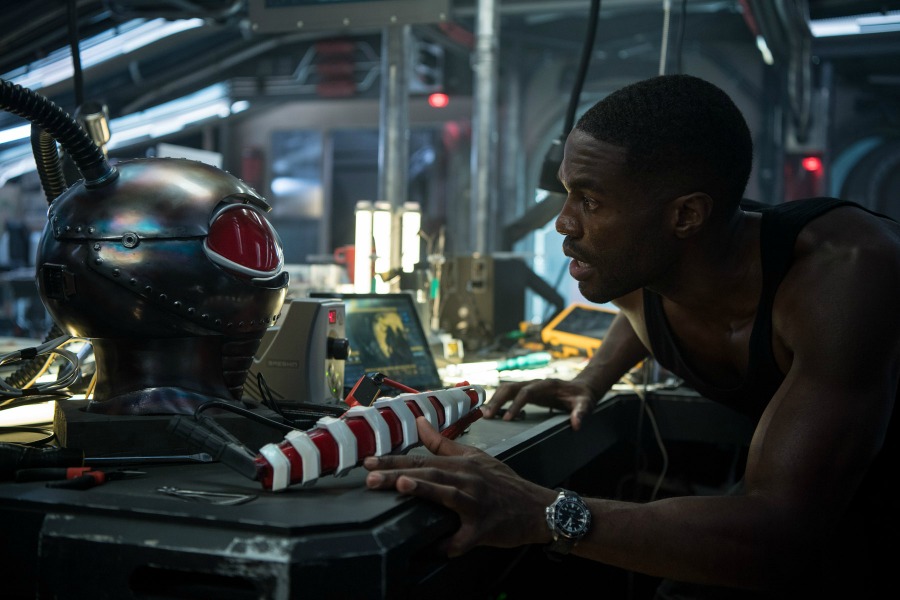 The submarine fight is our intro to Black Manta

James Wan: That’s our intro into Black Manta before he's Black Manta. It's an Aquaman origin story, but it's also a Black Manta origin story as well. That's one thing I've wanted to make clear, because everyone seems to think that Black Manta is the main villain in this. He's not. He's not. It's his origin, so it's how he ultimately becomes Black Manta, right? Arthur's real antagonist in this movie is his half-brother, King Orm.

James Wan: It's basically the combat of the kings. It's an ancient ritual. It's a practice. It's like, "Okay, if you think you have the right to be the king," which Arthur has the right to be the king because he is the first born. Orm wants him to prove it, basically. We do have a scene in it that is in the trailer where basically you see the two of them dress up in gladiatorial armor, ancient armor that they get to duke it out in a colosseum, an ancient colosseum built into the cone of a volcano.

On the mix of water and fire

James Wan: I wanted that look because of the color palette. I love the contrast of hot lava from down there, but then the blue, cool light of Atlantis from above.

But does Aquaman get to rock that classic outfit?

James Wan: I like to think that the toys got it wrong. I don't know. It's not in the trailer, so I don't know what these guys are hinting at [laughs].

Wait, did that kid just catch a Trident?

James Wan: There was a part of me that wanted to have a Miyagi/Daniel-san moment in the movie where he's training him on the beach, basically. The only thing he's not doing is the crane kick.

For me, anyway, what makes origin stories and origin superhero stories really fun is just watching the training sequences. Watching how they become who they are, and that is a sequence in the movie where his mentor, played by Willem Dafoe, Vulko, trains the boy. How to potentially use the trident. When Willem and I spoke very early on, we always saw him as an old school samurai warrior, like an Obi-Wan Kenobi training Luke Skywalker. That was the influence, and Willem is such a big fan of Toshiro Mifune. He's modeling himself after Toshiro Mifune in all the classic Kurosawa films, even down to the way Willem looks in the movie. His hair is pulled back into a bun like a samurai warrior, and his sword's behind his back.

James Wan: Early on when I was designing the story, and the script, I reached out to DC. I reached out to Zack Snyder as well. I said, "Could you guys do me a big favor? Please don't go to Atlantis. I really wanted my character to go to Atlantis for the first time." It was such a big part of the story that I was writing that if they had him go to Atlantis in Justice League, it would unravel my story that I wanted to tell. Of course, Zack was super cool. He was like, "Okay, I wouldn't do that. I wouldn't bone you that way." So in the movie, that first shot is his first shot. We come to the gate of Atlantis, and that is the first shot we see once we come through the gate of Atlantis.

The inspiration for Atlantis

James Wan: We did so much research on underwater plants and marine life, and when you're so deep down, I realized that the sun doesn't penetrate. The sun only penetrates the surface level up to a certain depth, and after that it gets really dark.

James Wan: I want it to be magical. I want the different kingdoms that we go to visit, and Atlantis being the main one, to be like nothing you've ever seen before. To be very unique and magical. We've pulled so much of our influences from the ocean, from the sea and the sea life.

One of the things I had to think about is, architecturally, how do they build their world down there? They don't use wood. They don't use steel, right? So then we started thinking that maybe your structure is organic, like giant jellyfish, and their structure could be coral. It's all grown. A modern Atlantis, at least, is all grown. Then that informs visually what they look like.

About that gorgeous split-screen shot

James Wan: That's when they go to the Trench kingdom, yes. I have a certain sort of visual signature throughout the movie that I just love. Technology allows me to basically create a split-screen image above the surface, and below the surface of the water, which you can never really shoot. It allows me to create really graphic images

James Wan: It's not unlike what Indy had to do to find the Ark of the Covenant. Our hero has to go on this journey ... Arthur has to go on this journey with Mera to find an ancient relic. They have to basically follow the breadcrumbs, maps and all that, and it takes them through different kingdoms. The idea here is, he gets to learn the different worlds, and it helps shape who he is supposed to be. He needs to understand that to become king of Atlantis, he has to build bridges, not walls. 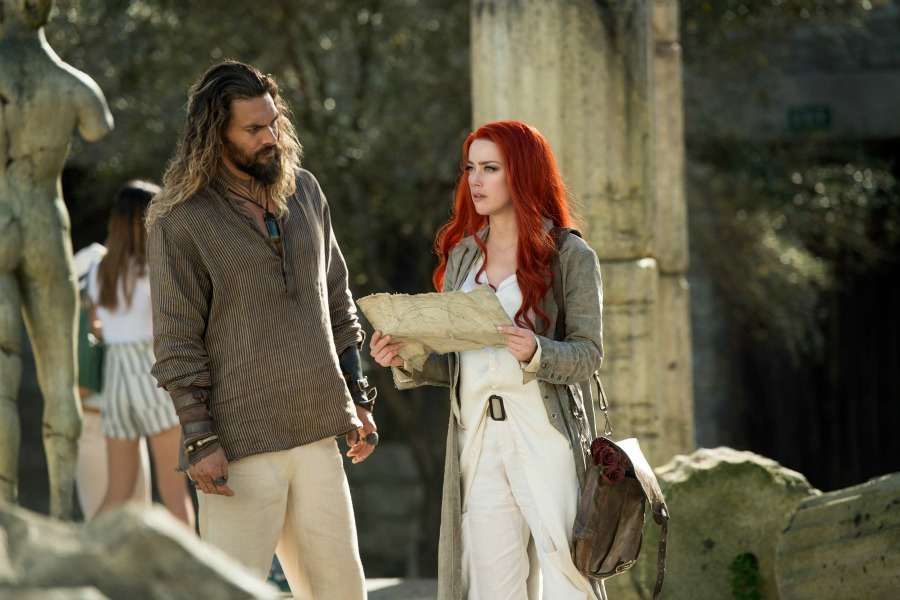 On the relationship between Arthur and Mera

James Wan: Romancing the Stone is the one that was my very early aspiration, yeah. Very Kathleen Turner meets the roguish charm of Michael Douglas, yeah. I think it works nicely because Amber's character is supposed to be very prim and proper. She's of royal upbringing, and she is not a fan of the surface world. So she thumbs her nose down at everything in the surface world. For Arthur, he's Jason Momoa, so he's larger than life. He's big and all that. So I think their own personal dynamics are really what make for a fun dynamic.

What’s up with that giant piranha-looking creature?

James Wan: The sharks, the Atlantean soldiers, are the white ones. I don't think we have that here. The white Atlantean soldiers are in the white armor suit, and they ride armored sharks. That's one side. The sea dragons belong to the kingdom of Xebel, the Xebellians, and that's the kingdom ruled by Dolph Lungdren. He's the king of that kingdom, and Mera is the daughter of Dolph Lungdren.

The massive battle at the end of the trailer

James Wan: That’s where we get to meet one of the last kingdoms… without giving too much away. I wanted to make a superhero movie that wasn't a superhero movie. It doesn't follow the norm and structure of your normal superhero movie. It's not about a guy who acquires some powers, and he's learning to make his suit. He's learning to fight some petty crime on the street and stuff like that. It's not that version. I modeled the movie more after classic action-adventure sort of fantasy films. It's no different to The Dark Crystal or Lord of the Rings. It's more in that spirit, yeah.

Aquaman hits theaters on December 21. Stay tuned to Fandango for our full interview with the entire cast.