Not being a comic book geek but a fan of comic book movie adaptations, I enjoyed Zack Snyder's ambitious take on the Watchmen graphic novel and didn't find it rushed or edited to the point of incomprehensibility, as some critics said. Those naysayers may be more pleased, then, by the Watchmen Director's Cut, which adds 24 minutes to the 162-minute theatrical version. 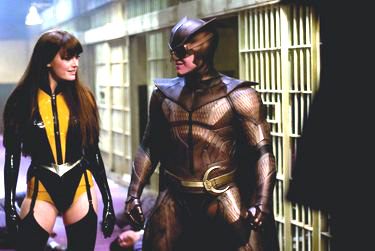 I know what you're saying: "Like it needed to be longer!" But the added footage actually helps explain why the Watchmen feel so disenfranchised and frustrated, and it brings an even grittier look and feel to the movie. Yeah, the whole thing is kind of a downer, but stylistically it's fantastic. Non-fans of the movie should give this new cut a look--I think people will like it better the second time around.

Coraline Astounding visuals accompany this well-acted, imaginative story about a lonely girl living in a dilapidated boarding house with her preoccupied parents who discovers a hidden door that leads to a parallel world. Fantastical, weird and scary, it's not so much for the kiddies as parents who're into Tim Burton-style stop-motion.

The Great Buck Howard John Malkovich is note-perfect as a has-been magic hack performing in half-filled backwater theaters who takes on a law-school dropout (Colin Hanks) as his assistant-slash-PR guy.