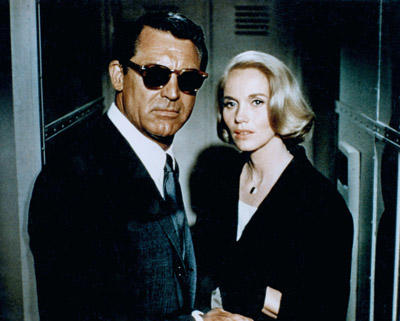 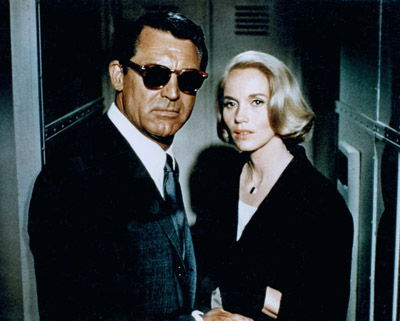 One of my absolute favorite Hitchcock movies finally comes to Blu-ray, and Warner Home Video has outdone itself with this release (also available in a 2-disc DVD set) starring Cary Grant (in his final collaboration with the director) as a victim of mistaken identity who lands in a whole mess of hot water that could wind up with him dead. His only ally seems to be the gorgeous Eve (Eva Marie Saint), but everything isn't what it seems--is it? The colors pop, the scenery (Mount Rushmore, Park Avenue, flat farmland) looks as Technicolor-crisp as if you were standing in it, and the Dolby 5.1 Surround sound treats the dialogue and Bernard Hermann's classic score sharply and effectively.

Extras: All the bonus features from the film's 2000 DVD release are here (commentary, a Cary Grant docu, more), plus a few new ones: A clip-heavy 2009 docu about Hitchcock's most celebrated films and a retrospective on North by Northwest by contemporary filmmakers.  I really liked the packaging as well; the it includes a nice photo book about the movie and filmmakers.
More New Releases:
G.I. Joe: The Rise of Cobra Armed with the ultimate in high-tech weaponry, the JOE team travels the world in pursuit of the evil organization COBRA, which is threatening to bring the world to its knees. Extras: A 3D game that lets you battle one-on-one as a JOE character, a featurette on the complex visual effects, making-of doc, etc.
The Taking of Pelham 123 This pedigreed remake stars Denzel Washington as a NY subway dispatcher who goes up against John Travolta as a criminal mastermind who takes a train hostage. Good acting all around; Travolta's weirdly stylized outbursts, in particular, will keep you watching. Extras: "The NYC Subway System" and more.
I Love You Beth Cooper In his valedictorian speech, a geeky high schooler proclaims his love for super-popular Beth (Hayden Panettiere), who then takes him out for the night of his life. Check out the alternate ending not seen in theaters. Plus: watch this exclusive clip from the DVD featurettes!
Aliens in the Attic What looks like a boring summer ahead turns crazy when little green aliens crash-land on the roof of the family lake house, with plans to conquer Earth! It's up to the Pearson kids to save the day--without their parents finding out, of course. Voiced by Doris Roberts, Andy Richter, Kevin Nealon and more.
Food, Inc.
Lemon Tree
New Special Editions/Collections:
National Lampoon’s Christmas Vacation Ultimate Coll. Ed. Chevy Chase's Christmas classic celebrates its 20th anniversary this year, and Warner Bros. gives it the special edition treatment with this gift set tailor-made for the season. In either Blu-ray or DVD, the set includes drink coasters with memorable quotes, a collectible moose figurine (BD set only), Clark Griswold's Santa hat and faux snow, all packaged in a festive Christmas tin.
Rocky: The Undisputed Collection The boxer Richard Roeper called "one of the most iconic characters in the history of motion pictures” comes to vivid life in this definitive BD set that includes all six films. A bonus disc includes a trivia game, making-of documentary and several featurettes/interviews.
Say Anything 20th Anniversary Edition Cameron Crowe's wonderful romantic comedy starring John Cusack also has its two-decade anniversary this year, and debuts on Blu-ray with this release (also available on DVD). Both versions have two brand-new features: an interview with Crowe and a look at celeb fans of the film, and the BD has a new retrospective and a trivia track.
NOTE: If you're in New York City today, you might see the many Lloyd Doblers running through the streets from Union Square to NYU wearing trench coats and carrying boom boxes to promote the release. The stunt ends up at Times Square, where the band Lloyd Dobler Effect will give a special performance of "In Your Eyes" at 4:30 p.m. EST.
Like it? Share it: