It's about time Paul Rudd headlined his own movie, after having stolen scenes in the likes of The 40-Year-Old Virgin and Knocked Up (note to Judd Apatow: what have you been missing?). Here he plays a real estate agent successful in everything but meeting ... guys? In need of a best man for his impending nuptials, Peter embarks on a series of man dates until this Type A Felix finally meets his Oscar in Jason Segal's Sydney. It's fresh, funny, and sure, there are d*ck jokes, vomit humor and flatulence galore --but isn't that what makes a great guy rom-com? 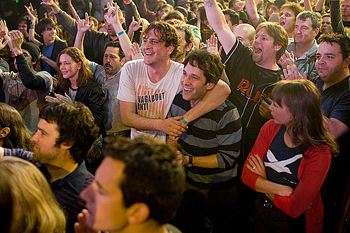 The Class This 2008 Cannes Palme d'Or winning drama based on true events follows a French teacher's journey over one year instructing a multicultural classroom and the challenges it brought.

Gigantic  Breezy indie about a mattress salesman who dreams of adopting a Chinese baby and meets cute with a rich girl nicknamed "Happy" played by omnipresent indie darling Zooey Deschanel.