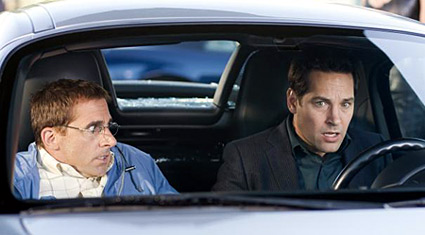 Despite its somewhat unsavory premise (jerkoff execs invite "idiots" to dinner so they can make fun of them), Dinner for Schmucks manages to become an amiable, funny and sometimes hilarious summer movie due to the polished touch of Meet the Parents director Jay Roach and the the comic talents of powerhouses Steve Carell, Zach Galifianakis and Jemaine Clement.

The actual dinner is almost anticlimactic, coming at the tail end of a near two-hour comedy that's more concerned with the relationship between Paul Rudd's Tim Conrad, a young, corporate up-and-comer, and Carell's Barry Speck, an unsuspecting, sweet-natured invitee who spends his spare time creating dioramas out of dead mice. Tim's reluctant at first to throw his new friend (they meet after Tim almost runs him over) under the bus of his a-hole colleagues' antics, but Tim also is hoping to move up the ladder, and thus convince his pretty girlfriend that he's marriage material.

Most of the running time is spent between these two unlikely buddies, with Barry trying to patch up the troubled relationship between Tim and his girl, but unwittingly making things worse at every turn. It stumbles along pleasantly enough, but the funniest material lies in the side characters and their interactions with our limited IQ underdog. Clement co-stars as a bohemian artist alpha male who sometimes wears hooves, and whose works always include pictures of himself; Zach Galifianakis is introduced as Barry's super looney co-worker at the IRS. Roach is a master at crafting broad appeal comedies, but these performers and their weird, scripted scenarios with Carell's Barry are slightly off-kilter and highly funny. Clement has a ball playing up his character's bawdy, animalistic tendencies, and Galifianakis deserves his own mini-comedy based on his player's whole "mind control" schtick.

The least interesting thing in the movie is the romantic subplot about Rudd's character getting back together with his true love. Also, the dinner itself doesn't play as funny as it should. If you've seen the previews, then you've seen most of the best parts. Thankfully, there are many, many absurd, laugh-out-loud moments along the way that will keep viewers interested, and could turn Dinner into one of the season's sleeper hits...

On the subject of sleepers...remember Paul Rudd back when he was just the step brother of Alicia Silverstone in Clueless? What a crazy, comedy-filled 15 years it's been for the actor...which of his comedies have you most enjoyed? Stuff like Anchorman or Forgetting Sarah Marshall? Or how about I Love You, Man or Role Models? Or maybe something underneath the radar like 200 Cigarettes? Hmmm...