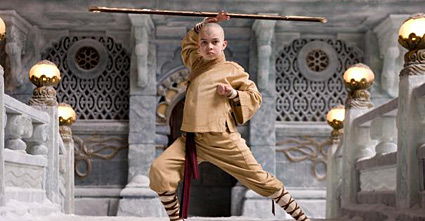 Take it from someone who's literally seen every summer movie that's come out this season - The Last Airbender, despite what you've heard, is not the worst movie out there. Convulted? Sure. Incomprehensible? Somewhat. Rife with bad acting? Yes, definitely.

But somewhere in the footage that was shot lies a good movie based on the popular Nickelodeon cartoon. There are sequences in this film that work. The production values are great. And if you don't see it in 3D, you won't be distracted by the poor conversion and the hassle of wearing those ungodly spectacles.

For me personally, Airbender wasn't hard to watch, and every time Jackson Rathbone uttered a horrible line reading (don't give up your day job in the Twilight series), I just laughed and waited for a fun stunt sequence.

The real bonus of my viewing was watching it with the real airbender - the one and only Jade Quon, who is the wife of my friend and co-worker Victor, and the stunt double for Noah Ringer's Aang in the movie (if the little boy isn't doing Tai-Chi or showing off his impressive martial arts skills with a bowstaff, then it's Jade...any cool running, jumping, backflipping or kicking tail on a hundred ornery firebenders at once...also Jade...actually, instead of watching the movie, it might be more fun to watch her demo reel at http://jadequon.com).

The bad thing is, all of the good elements (and again, there are good elements) have been given short shrift. According to Jade, there was additional great footage of the stunt team and the amazing set designs that was shot for the epic adventure, but somehow, for whatever reason (political or otherwise), this baby's been cut down to 103 minutes.

And that's a shame. If you don't know this story and you're not a 10-year-old boy, you'll be frustrated by the severe editing. Anytime a stunt sequence or a narrative element about the history of the airbenders or their fight with the firebenders starts to look promising, there's a cut to something else that makes you think - what were those cats talking about again? The film makes you want to know more about the TV series, which, from all accounts, is pretty amazing.

I also question Shyamalan's choice to change the ethnicities of the airbender and the two waterbenders who help him, since the project started as a Japanese cartoon whose lead characters were clearly Asian. Not helping matters is that Rathbone and Nicola Peltz, as siblings Sokka and Katara, look mostly out of place and uncomfortable.

It doesn't add up to much, but again, there are the cool action scenes, and unlike my critic friends, I liked the whole airbending vs. firebending vs. waterbending special effects. I also didn't mind Slumdog Millionaire star Dev Patel as the exiled Fire Nation prince who I hear develops into a substantial hero character in later installments. The movie leaves it open for those episodes, but if the critical buzz bears out, don't get your hopes up. If there is another one, it'd be interesting to see if Shyamalan can take some of the critical hints and right this ship.

What say you? Are you out based on the bad reviews? Or are you a fan of the series and determined to see what the fuss is about? While I can't totally defend it, I do see this as light years ahead of Marmaduke and Killers and Just Wright. If I'm forced to consume subpar cinema, then I appreciate a few interesting ideas and a little visual pizzazz to make it go down easier. 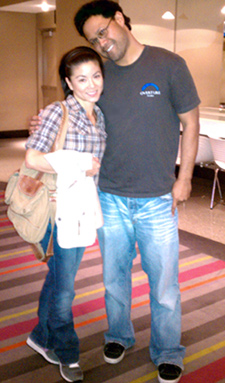 Spooky Trailers for 'Let Me In' and 'Paranormal Activity 2'

Spooky Trailers for 'Let Me In' and 'Paranormal Activity 2'